Nothing can stop the train now. It is what it is and it will be what it will be. I won’t go so far as quoting the Eagles and saying it’s a peaceful, easy feeling, but it’s a calm in knowing that tomorrow will come, all twenty-seven-thousand of us will go for a run, and that will be that. Granted, unlike other highly anticipated events of great magnitude like the arrival of our darling daughters, I could just turn tail and flee, but that’s highly unlikely.

Speaking of darling daughters, there’s nothing like a different perspective to turn what’s become a somewhat repetitive event into something much more fun. No dad looks forward to the day when his daughters start making goo-goo eyes at the boys, but that’s another train that can’t be stopped, and if goo-goo eyes must be made, all a dad can hope for is that they’re made in good directions.

Well, dad is happy. Darling Daughter the Younger took a bit of a fancy to the American King of Marathoners when he ran past her at Newton Lower Falls last year – and she snapped an awesome picture to boot: 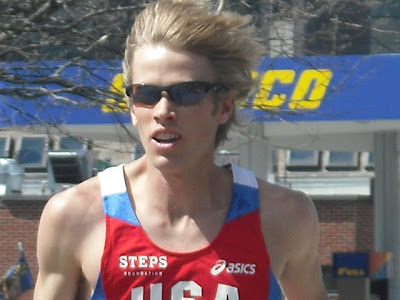 That certainly livened up this year’s Boston Marathon Expo. Admittedly, while I wouldn’t miss it, there is a lot of sameness to the event after five years, and I wasn’t expecting much different as she and I headed into the city. 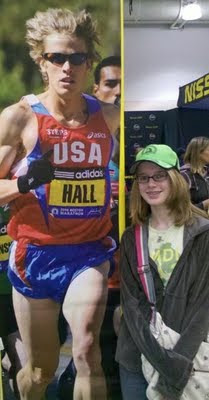 …um, where was I…right…we’d just snapped Darling Daughter’s picture with a larger-than-life yet fully cardboard Ryan Hall, and had just purchased his book – autographed copy, mind you – when over the PA came the announcement that the man himself would be appearing shortly.

C’mon, think about it, when you were a teen, you know you never got the chance to really meet your idol, right? So imagine how excited you would’ve been to get that shot?

Yes, this was fun. And really only about a twenty minute wait. And Ryan is probably about the best role model you could ever hope for: grounded in faith, dedicated to excellence, and yes, for my daughter, a decent looking guy even sporting this year’s cropped hairdo. If Darling Daughter were running the marathon on Monday, she wouldn’t’ need to worry about impact fatigue or injuries, she’d float the whole way. 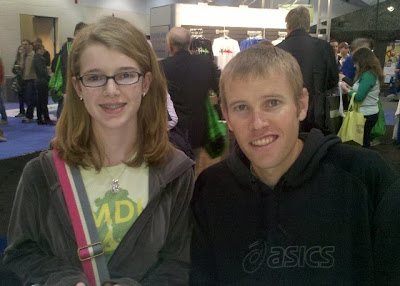 And let’s face it, I didn’t mind meeting, and getting my mug, with a runner of Ryan’s caliber. Who, by the way, was considerate enough – in the midst of a thousand people bearing down to see him – to ask me how I thought my race would go. And how will it go? As usual, I have no idea. On the plus side, my training has been pretty solid this time, and my average training pace has come down nicely in recent weeks, indicating a better level of fitness than I’ve enjoyed 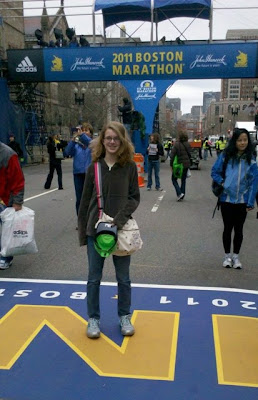 in some time. On the minus side, none of my long runs were particularly strong, and a small health incident a few days ago has my head a bit worried, though I know I’m prone to that head thing. On the external factor side, the wind that just caused my writer’s interruption a few minutes back is forecast to be at our backs tomorrow, at least until we top the Newton hills where it’s always notoriously in your face.

All I can say is that the train pulls out tomorrow morning. No stopping it now.
Posted by Gary Cattarin at 1:43 PM