It’s oh-so-difficult to fire up the motivation to write about running when you’re not running.

In the seemingly unending story of, “What I didn’t do on summer vacation”, despite the fact that it’s no longer summer, add to the list that I did not, as planned, go to New York City two weekends back, and I did not, as planned, run the New York City Marathon, and let the record be known that I am not, as is to be expected, happy about those facts. So stop spreading the news, I didn’t leave on that day, and I wasn’t a part of it nor did I even start it. No York, No York.

Call this Strike Two, but unlike the unlikely Cubbies, I may not have three strikes to work with here. Four years ago, my first attempt at checking the “You’ve Gotta’ Do It Once” experience box that is the New York City Marathon was cancelled by a highly unpleasant female named Sandy. This time the enemy lay within; the body betrayed, the cancellation replayed. And of course, as it would turn out, the weather on marathon morning was…utterly delightful. Figures.

Dearest Spouse was enduring a marathon of her own with my constant vacillations on whether to make the trip; vacillations which endured for months and reached a fever pitch in the weeks leading up to the big event. On one hand, the entry fee, and New York’s is considerable, was paid, and was gone no matter what I did, so why not use it? On the other hand, travel wasn’t cheap, and by the time I opted to go if I could find someone to split the hotel cost, everyone had their plans set. But on the third hand, while I knew I couldn’t race it, a Boston Qualifier for 2018, when I will have the benefit of a new age group offering up a forty-minute cushion over my last marathon, seemed fairly easily within reach, even if the day devolved to race-course tourism, so why not spend a few bucks and go for a tour? But on the forth hand (I think I’m into feet at this point), even that relaxed (for me) time goal wasn’t at all a certainty. 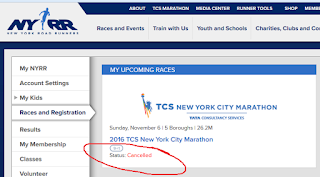 About ten days before, it was time to excrete or get off the cooking utensil. I headed out the door with the intent of loping an easy twenty (yes, ten days before marathon day, because at the pace I was targeting for both that run and the race, tapering wasn’t a big worry). It was decision time, do or die, and… the answer clearly was die. Yeah, it might have just been that day, and the next day I might have been fine, but for the sanity of Dearest Spouse, that day had to be the deciding day, and that day’s run was utterly horrible. By five miles my body was in revolt. The next four, returning on a short-circuited course, wouldn’t have even made my relaxed qualifier pace. Yeah, it was that bad. Come home, don’t reconsider, save yourself for another day, click the button.

And it was over, as was my fall racing season, which consisted of exactly one outing (though to be fair, I will slog through a turkey run next week). That one outing, the John Tanner Memorial, was a decent but not terribly encouraging outing, though the point of it wasn’t so much the race as to honor our dearly missed John and do some good in his name.

So long has passed – it’s that writing motivation thing again – that the details of that race have faded, which isn’t terribly fair to the organizers of a fine event. Unlike last year, when in retrospect I felt a tad embarrassed, having showed up to be competitive against a field that was mostly out for a pleasant outing, I came at this year’s race a little more casually, partly because I had to. Coming in on utterly terrible training over the summer; poor mileage, no quality, big gaps, and body parts that were still not healed or healing, my expectations were pretty low. When one of the two kids who put up a bit of a fight last year showed up on the starting line, I was ready to hand it to him right then and there.

Lesson to self: Don’t be so harsh. No, this ramble wasn’t anything stellar, but it wasn’t a horror show, either. The first mile clocked in close to six, far quicker than I expected from achy, tired, out-of-shape legs. A downright duel was on by a mile-and-a-half, not with last year’s kid but with a different collection of unknowns. I snagged a half-stride lead for a brief while until a twenty-something opened up a gap that wouldn’t close. By the turnaround, I’d settled into a solid third and spent the next ten minutes weighing the old racing instinct against the newly aggressive self-preservation instinct. My head was wrapped more around trying to remember how many jugs of maple syrup I’d seen on the awards table – a truly sweet award if there ever was one – and how they’d be allocated – top three? – age groups? – rather than contemplating dropping a hammer (if indeed one even existed, which it probably didn’t) to go after the two guys ahead of me. Opting for the amber bottled proverbial carrot on the stick, I did a little on-course math, reset expectations, and gave myself a modest goal of clicking in within a minute of last year’s time. 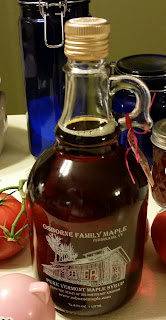 The nice thing about modest goals is that they’re easier to hit. Fifty-nine seconds over last year wasn’t a thrill in the record books, but it checked the box on the artificial goal, still meant being the top old fart in a race that didn’t distinguish between young’uns and old farts, and did, in fact, ring the bell at the syrup table. The ending score was quicker than expected, but not quick. This, it seems, may be a hint that I need to act a bit closer to my age.

But alas, that mildly brightish spot back in early October did not translate to readiness a month later. Hopes that shaking out the cobwebs would put me on a path for New York not only didn’t pan out; rather I’m now two weeks into another full stop – Dearest Spouse is putting in more miles than I! – and hoping for healing that to date continues to be elusive. The left knee alternates between fine and pain, but worse, it feels a bit like a dangling pendulum post-run. The right heel jumped into the fray just to be irksome, as if it knew that this was an optimal time to gain maximum annoyance. It’s disappointing to be sure, not just for me, but knowing that it’s tough to put out my usual upbeat positive message in these screes. And that’s the real reason for the motivation gap. I’ve no desire to be a doggie downer for you. 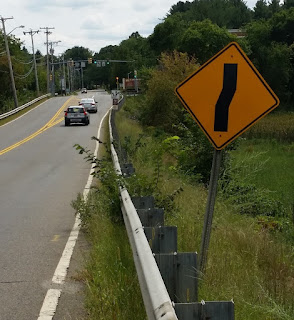 So, No York. But to pull out some badly needed positivism, I’m not dead yet. There are detours and curves in every road, some extreme, and some, like the one warned of in this, one of my favorite signs located just a town over, not so serious. Only time will tell which kind I’m dealing with. There have been comebacks before. The game’s not over. Let’s see what happens in the next inning. After all, even the Cubs can win it all.
Posted by Gary Cattarin at 11:16 PM No comments: