[ Ed Note: The first of several planned bits on Boston. How many? No idea… ]

Boston Number Five is in the can. For the world, the results were spectacular. For me, they were not in that class by any means, but satisfying nonetheless.

The Exalted Governing Bodies of the World won’t call it a world record due to Boston being point-to-point course, which certainly was a factor with Monday’s tailwind, and net downhill as well. But nobody will deny the brilliance of the fastest marathon ever run – indeed, the two fastest marathons every run, as even second place blew away the world’s previous best, and the four fastest Bostons to boot.

The Exalted Governing Bodies of the World could care less about me, which is just fine as I’ve had more than my share of publicity this year. And while the tailwind undoubtedly made it just a little easier to maintain pace at times, I needn’t worry about whether that or the net downhill course will affect my record, since I set no records, world, Boston, personal, or even personal Boston. Nor did I even break three hours. Spectacular? Not by a long shot. Yet I am entirely satisfied with the race.

About that three hour thing though? Darn close. Amusingly close.

In a race of even numbers – the day pegged my month-to-date at exactly 125.0 miles and my trailing 7-day count at exactly 50.0 (trailing 7-day is a method I use to gauge training intensity, since defining a week as, say, Sunday to Saturday assumes a normal schedule which doesn’t exist in the real world), …on such a day of coincidentally even numbers it would been just plain poetic to nail three hours exactly. And I almost did. After the dust swirled, the official net time recorded three hours and seven seconds.

You know how you look at the results of a large race like this and see the guy who finished at 2:59:59, and say, “Look at him, he broke three!” and the poor bloke who ran 3:00:00, and say, “Ahh, pity, he must be kicking himself!” that is, in many cases, perhaps appropriate, but for me, it really didn’t ring up any disappointment. Would two-colon-anything have been nice? Sure. But I elected to take three-colon-something and survive with a smile.

Just prior to mile twenty-five, where Boston slaps you with the evil little hill to climb the bridge over the Mass Pike – the evil little hill that most Boston veterans will tell you is far more insidious than Heartbreak or even the climb out of Newton Lower Falls – my body said to take a walk break, my second of the race. Having taken sixty seconds prior to Heartbreak and having reaped the refreshing benefit it provided for the next five miles, I knew that one more break would allow me to finish relatively strong, rather than dangerously woozy. (One word: Wineglass.) I also knew that one more break would probably give away the day’s potential sub-three. Wineglass avoidance or sub-three? I’m completely comfortable with the rational decision, and my nose isn’t broken to prove it.

Not to say there wasn’t still a chance of cracking the barrier again. I cut the planned sixty-second walk break down to fifty and revved up the engines for the final push. For the last one-point-two I gave it what I had, and coming down Boylston, for a time thought I might pull it out. Not to be. But not to worry, either. I knew my fitness level wasn’t at last year’s level and I didn’t expect sub-three. I hoped for three-oh-anything. Three-oh-oh certainly fit the bill. Satisfaction.

Especially considering that I never hit the groove in this race. As an event, it was as fabulous and exciting as any – perhaps better, as the crowds seemed larger and louder than ever – but as a race, it was grueling. You’d like a marathon to be a cruise through as many miles as possible before the real hard work begins. Twenty would be great, more even better. Eighteen? Better than fourteen. You get the picture. Monday? I had that feeling for maybe three miles, if I exaggerate a bit. From that point on, I felt like I could have cut the engines at any point and join the ranks of the tourists. My senses said I’d have to back off, call it a day, joined the jog-fest. But mental inertia kept me clicking them off at pace, eight, ten, halfway, a dozen to go, ten left, shrinking it down. 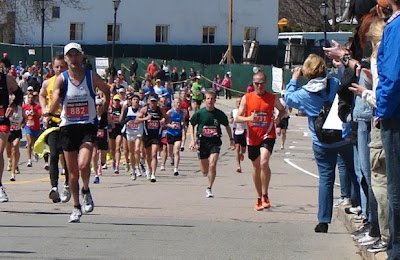 When I passed my family at Newton Lower Falls at sixteen (photo), it was obvious to me at least, even if not to them, that a mighty struggle didn’t just loom ahead, it was already well down the path to miniseries status. But somehow, outside of the two common-sense walk breaks, my pace didn’t suffer too badly, and the death shuffle never materialized. Somehow that marathoning mind just kept telling the legs to keep the pace.

Adding all of that up and coming out at three flat? I’d be a fool to be anything other than happy.

More Boston to come – tales from the course, analysis, and what not!
Posted by Gary Cattarin at 10:57 PM