Scene of the Crime

I’ve told the story hundreds of times, maybe more. I’ve referred so many people to the famed blog posting, “Paying the Price at Wineglass” that the bits on the disks where it is stored on that anonymous blog server in the sky are worn out. But I’ve always wondered, what really happened? So given the opportunity, I went back to check it out.

I am, of course, referring to the great Wineglass marathon tragedy of last fall, that fateful day when the foot went snap and the face went plant and life became utterly more complicated within a span of just under three hours. 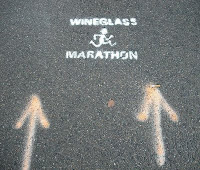 My standard story is this: The finish line was on a downgrade, at the line where the asphalt of the pedestrian bridge met the brick walkway of the park. I tripped over that junction – the spot sis had pointed out the day before as a hazard that someone would fall over – and had nothing left to catch myself. Not knowing that one big toe was out of commission from what I didn’t yet know was the snapped tendon from 50 feet into the race, my brain didn’t process why I wasn’t able to catch myself. It’s like stomping on your brakes when you haven’t seen any warning lights and not comprehending that they’re not working. Splat. Faceplant.

What haunts me to this day is the word “collapse”. Was it a trip? Or did I simply crumple at the line, utterly spent, pushed well past the point of prudence, yet 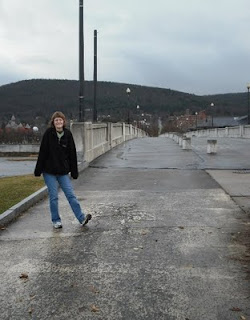 somehow maintaining myself mentally until that point? That latter option is frightening indeed. It speaks to the horrors of what might have been, the headline that could have happened, but thankfully didn’t. I know there’s an element in me that’s probably capable of such an excessive push. Did I bring it on myself? Or, did I simply trip, as I’ve always hoped was the case.

The day of the race, I really couldn’t get a close enough look. Even after being patched in the med tent, runners continued to stream through the finish for hours. I really couldn’t interfere with finish line operations to the extent needed to really examine the scene of the crime.

And since then, I’ve wanted to do just that.

The Thanksgiving Pie & Glove race came within 3 blocks of the crime scene, but that was mid-race, and afterward we had a big dinner to get home to. The next day, however, we took the kids down to the Corning Museum of Glass, which I hadn’t visited in probably 15-plus years – and well worth a visit if you’re in the area. The museum is exactly one block north of the north end of the famed bridge.

By the time we’d finished doing the museum thing, the weather was windy, gray, and spitting, but I would not be denied. We slogged across the bridge (nice shot of it, by the way, in the January 2010 issue of Runners’ World). For my wife and nephew, this was a silly adventure. For me, I was trying to get back into my head that day last October as I trod this same approach and almost stumbled across the bridge. Across the flat mid-section we went, and down the other side, not seriously down, but still down.

And there it was. The end of the asphalt, the start of the bricks. I half expected to see a 2-inch lip,

something obvious, something that said, “Of course you fell over this, you idiot.” But that really wasn’t the case. The lip was pretty much flush, indeed, more of a depression than a lip in many 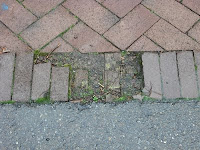 places. There was, however, a pretty significant hole where a few bricks had long since gone AWOL. Not quite on center, not in a likely spot for crossing the line, but possible. Was that it? Did I cross the line a little right of center – quite feasible – and more or less fall into the hole, lose my balance and go down? Quite plausible. Or perhaps I just…crumbled.

I’ll never really know. I looked at it from every angle. We took twenty seven 8x10 color photographs and added circles and arrows and a paragraph on the back of each one to be used as evidence (this was, after all, Thanksgiving weekend, and we had played Arlo’s classic as we travelled through Stockbridge, Massachusetts a couple days prior). Including the imaginative shot of how steep the downgrade seemed in retrospect… 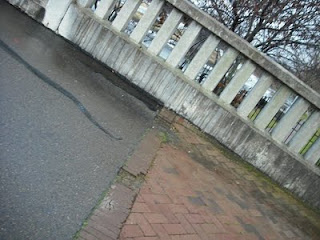 …but of course wasn’t: 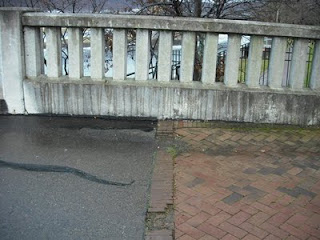 I analyzed and reanalyzed in my head, even re-enacted if for the prime time crime shows... 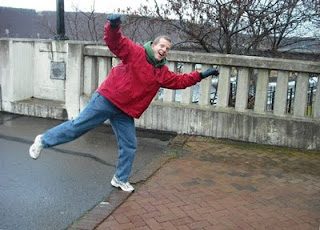 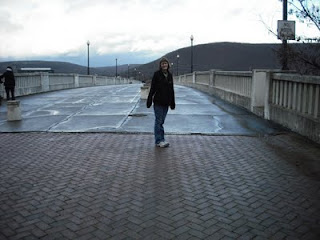 I just want to make damn sure I never do it again.
Posted by Gary Cattarin at 11:36 PM No comments:

What will any of us leave behind, beside a trail of debris and greenhouse gasses? Can we each put a little positive nudge into the world? Thanksgiving morning made it seem that way. It would appear I’ve contributed to the infection my family, and happily, not with H1N1.

Ah, Thanksgiving, that uniquely American tradition where families battle traffic to gather around a meal that, as sis put it, takes a day to prepare and twenty minutes to destroy. Never mind that it’s made up almost entirely of things that weren’t at the legendary (and some would say mythical) first Thanksgiving feast. Just another excuse to fatten America.

Unless you’re a runner, in which case it means that if you can’t find a race that morning, you’re downright depressed. The Thanksgiving Day race is another uniquely American tradition designed to alleviate the guilt of what you’re about to do to yourself at the table in a few hours. It’s the next best thing to going to confession, and you don’t have to remember the script. Bless me Father, for I am about to eat too much, I will therefore insert 5 miles between me and that upcoming meal.

We’ve developed a culture of haves and have nots. The haves can’t live without their caloric pre-burn, the have nots wouldn’t think of such a ridiculous thing to do on a holiday, especially when the weather is usually pretty rough. Or perhaps I’ve got it backwards. The haves eat it and keep it and have it, the have nots burn it off. Whatever.

When you’re the runner in the family of non-runners, you try to find a way to sneak out on this family-centric day to get to your race. You’re leaving all that family behind on that day when you’re all supposed to be together. It’s a perpetual guilt game. Did I mention guilt again? And confession? Yes, I’m Catholic, I can’t help it, it’s genetic.

There is another way. Infect your family. Give them the bug. Make them itch.

Now, I don’t claim full credit for what happened last week, but I can’t deny some influence. I’ve already mentioned that niece Kris has taken up our mental illness. We ran the Boilermaker this summer, and she’s rumbling about doing a half marathon. Her siblings have stepped out for a few here and there. My daughters have put in a few miles on the school cross country team. My wife even admits to jogging a few miles when few were looking. Finally, sis has been walking, and has hinted at picking up the pace if her knee would behave. And in fact, out Thanksgiving outing was in fact her suggestion. The ultimate test of infection! I wasn’t the pusher, she was!

What a formula! Rather than wallow in calories all day, eight of us piled into two cars and headed for downtown Corning, 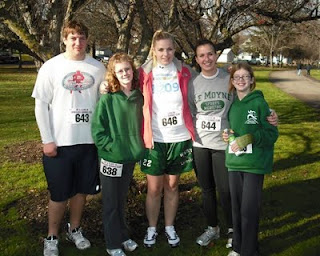 New York on Thanksgiving day for the annual Pie & Glove 5K, a very casual race where everyone gets a pair of the finest gloves – you know, the kind that it doesn’t matter if they’re left or right, they’re all the same – and the prizes are, well, as the name implies, more calories. At five bucks a head, it’s easy to bring the whole family. As we pulled away from sis’s house in the chase car, it struck me how utterly cool this was. Almost our entire family was off to the race, and not just to watch. Infection accomplished. Healthy obsession planted. Seeing everyone with numbers pinned to their shirts was simply way cool.

The race? Plenty of fun. Iffy weather turned into fine weather. Once again, I overdressed. Seems taking last winter off for the surgery completely trashed my ability to accurately dress for these things (me, overdressed, in blue and tights on the left in this picture). I’ve got to work on that. The turnout of 800 somewhat overwhelmed the organizers. It appears we’re not the only family shifting to a healthy outing on T-Day. It’s all good.

My race was mediocre, a couple seconds over 19 minutes, but after taking the equivalent of a few weeks off for that pesky leg injury, I had no complaints, and that injury was nowhere to be felt. Sometimes a good race is what you need to shake the bolts loose and move on. The rest of the clan? Well, performance-wise we would have taken no team trophies, not that there were any. Nor did we win any pies, not that we needed any with three waiting for us back home. Nephew Brian ran a respectable race. The rest, moving in clumps, did a little walking, a little jogging, a little more walking, a little more walking. Since one niece was working on about three hours of sleep, the clumps tended to slow – hey, it’s Thanksgiving, you’re home from college, you’ve got limited time to see your friends, so you don’t sleep much, and you don’t exactly feel your best the next day. OK, I was young once too. But she covered the distance. And even sis with the bum knee gutted it out.

After then we all went back to Alice’s and had a Thanksgiving dinner that couldn’t be beat and we didn’t even have to pick up the garbage. (No, sis isn’t named Alice, that just seemed to be the right thing to say.) And we only put on four pounds that day, rather than the usual five.
Posted by Gary Cattarin at 11:30 PM No comments: