Boston Analyzed By An Engineer

[ Ed Note: The second of several planned bits on Boston. ]

It’s a week since Boston, and about three days since I intended to publish the second in the Boston story series. So it goes. But while writing schedule may have suffered, recovery and training have not. I looked at the log and realized I’d gone ten days straight – yes, I ran, albeit short, slow, and flat (did I say slow?) the days after Boston – and so today was to have been a designated rest. A real rest, as in no running, no nothing, not what I often convince myself is a rest when I’m just out slow with the gang, having fun, not working, virtual rest, but let’s face it, not real rest.

But love knows no bounds – in this case Darling Daughter the Younger’s love for her Marathon Hero Idol Ryan Hall – and she found herself inspired while reading his book late this afternoon ( the autographed copy from the expo) and announced she wanted to go for a run. My kid wants to run? How can I refuse that? Of course, a couple miles slowly with her is well and good, but then I’m warmed up, so why not tack on a couple of ‘homey eight-hundreds’? It’s a bit over half a mile around the block, with a good hill, and a couple of those at 5K pace made it into a workout. So much for the rest day.

But it’s all good. Other than a slightly noticeable hamstring – really nothing more than a ‘slightly aware that the ham exists’, not a worrisome issue – Boston recovery has been a breeze. The two-day burn came and went with relatively minor intensity. The blisters – more than usual to be sure, but none torn – shrank away, and I found myself on a twelve miler yesterday, trying to penetrate some roads in the city that had seemed impenetrable, but on a tip I’d heard might in fact be otherwise. Well, turned out they weren’t, but the adventure that ensued, which included a rock scramble, a treacherous canal crossing on a dam-like structure, and an escape through a construction zone and over a fence, made for an interesting outing.

And the point of this is? Feeling good, I’m going to Buffalo, using that comp entry from last year’s injury deferral, looking at Boston as a training run for the real race through the flatness of Western New York. The app went in the mail today. So it’s worth analyzing what really happened at Boston to assess where I stand for the next one, now slightly under five weeks away.

It’s tough to compare marathon A to marathon B. There are just too many variables, and any statistician will tell you that you don’t have enough data points. The old rule of thumb that says if good ol’ N is less than thirty then no meaningful analysis can be made, is really tough to overcome. Thirty marathons? By the time you reach that, you have changed. So just give it up. You get the idea. But Boston 2010 and Boston 2011, it turns out, are worth comparing. I did so almost accidentally, and a few good lessons seem to have emerged. 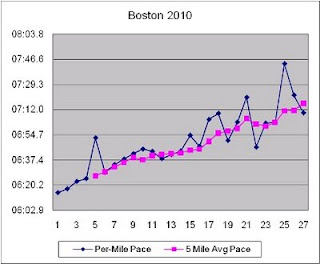 The perfect dream is a relatively flat line, holding pace, with strong (even if not negative) splits, all the way to the end of the rainbow. That rarely happens to begin with, and with the back-end-hill-loaded course, it’s pretty darn improbable at Boston. The best I typically hope for at Boston is a steady line through sixteen to where the hills start, then a slow, controlled rise in the average pace through Newton.

At Boston 2010, the chart was about as bad as I could imagine. The crucial pink 5-mile-average line resembled the Mount Washington Auto Road; uphill the entire way. Though the result was a pleasing 2:58:47, I never even considered it to be anything approaching a smart race.

Over a copy of 2010’s spreadsheet I began to punch in my 2011 splits. To my surprise, they weren’t only pretty darn close to identical, they were in many cases faster by a few seconds. But there were subtle differences (and amusing similarities): 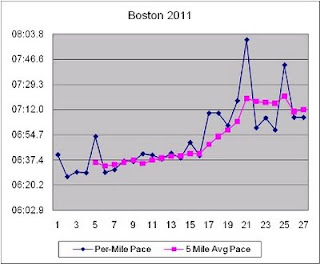 So, an extra walk break and a slower start, which at Boston is a smart move even if accidental, and the result was a minute and twenty seconds slower in 2011. Which begs the question, why the extra break?

Training logs answer that pretty easily. Last year, four months of solid base, versus three this year. Last year’s average training pace a bit quicker than this year’s. Last year, both twenty-miler training runs were at a strong sub-7:10 pace, versus this year, both were challenging for various reasons. The result is therefore not unexpected.

But after Boston last year, things went south. Injuries arose. Looking at my log, I can reel them off: Achilles, ankle, calf, hamstring. Things got ugly. Training suffered.

This year, knock on wood, Boston recovery has been easy. Things feel good. Average training pace is down in recent weeks. Should all hold up, I’ll have that fourth solid month of base on the books by Buffalo, along with the equivalent of four twenties leading into that next round.

Why not milk it? Let’s go to Buffalo.

More Boston to come – tales from the course and what not!
Posted by Gary Cattarin at 11:16 PM