It’s a fair cop. One of my club-mates chided me via social media after this weekend’s local Police Chase (did you notice that pun?…fair cop…Police Chase…oh, never mind). “It's hard to pity a runner that came in second today, only bested by a runner almost half his age,” wrote he in response to my last blog posting. Yeah, less than twenty-four hours after publishing my previous penning on the frustrations of the past few weeks, I did pull into the back lot of the local Moose club about ten seconds behind the winning youngster. Nolo contendere on that one. But while pleading no contest to the charge, let me also plead no pity to the intent.

Part of the problem here is thematic, part is timing, part is my tendency to under-predict (or call it an abhorrence of trash talk), and part is, I’d like to hope, plain old healing, though certainly if I’m right on that last part, it’s not a problem at all.

Thematically, this space, this periodic request to burn ten minutes of your day, is here to journal the ups and downs of hacking away toward fun, fitness, and tiny feats of accomplishment all while time incessantly hacks back. So when I bemoan aches and pains, it’s not to goad you into sending messages of solace, but to inspire you to battle through your own challenges.

As for timing, rarely are there hours in the day to allow publishing on an as-it-happens basis, and sometimes, since fun photos that might add to your perusing adventure have yet to surface, that’s not a great idea anyway. Stories back up, and while it’s enough to ask you to actually read this stuff, it’s clearly too much to ask you to read it more often than once a week or so, thus I sometimes feed these tales of adventures out over time. But occasionally that doesn’t work either. Case in point: when the topic is a lousy couple of weeks of training, it makes sense to get it out there before the plot spoiler of the next race. This time, I made it with about twelve hours to spare. And let’s remember, that next plot twist could have gone either way.

Add it up, and yes, guilty as charged. I published my tale of latest challenges, and twelve hours later cruised home in second place. So my club-mate’s chiding is at least on the surface warranted, but, your honor, I fall upon the court to recognize the justification for my actions.

And yes, the kid who won it was a mere babe, twenty-nine years my junior. And I’d run a warm-up with him to give him pointers on the course. And told him flat-out that I was doing it so when he beat me, I could humorously say it was because I’d shown him how. And then I called him back from a wrong turn he took mid-race. And none of that matters, because he ran a fine race and was well deserving of his victory, and I’m pleased for him.

On another day, I’d have tried to give him a run for his money. But on a day when I hadn’t had a solid run in weeks, when I was nursing a healing hamstring, and when I was questioning whether I should abandon my fall marathon a mere three weeks out (having still not notched a twenty-plus of adequate quality to convince me it’s worth spending the money on the hotel), I had a rational choice to make: put down the hammer and try to catch the youngster, knowing that he wouldn’t go down without a hell of a fight (sprinting against a youngster at my age is not wise or easy), and risk re-injuring the hammy, or keep a clear head and balance the importance of this local race against the bigger looming goal. There’d still be just as many burgers and beers and friends to enjoy them with after finishing in second place, and just as many medals as well, just that mine would read, “Winner of the Old Fart Division” rather than simply “Winner”. It was an easy decision.

From the rather disorganized start, my rival quickly slipped by and surged to put about forty yards between us before settling in for the long outbound climb. By the top of the main rise, I’d shaved off about ten of those yards, and then another ten climbing the last significant bump on the course, and was grinding that hamstring-and-coming-marathon versus local-five-k math, tending toward the former, when despite my earlier pointers, the Bounding Bundle of Youthful Energy ahead of me hit a crossroads and a wall of confusion. Despite my several shouts of, “Straight up!” he elected to go wrongly left and down – go figure. By the time he heard me and figured it out, I’d pulled even.

With a mile and a quarter to go, almost all of it downhill, at this exact point on the course last year I was also neck and neck with my competition for the local crown. But that day I wasn’t in hurtin’ shape, and my competition was a forty-something. This day, sprinting against a twenty-three-year-old while operating on questionable parts, well, just didn’t seem to be all that worth it. As the Bounding Bundle surged out twenty yards again, I wished him well and followed him home, crossing a good twenty seconds slower than what I’d clocked last year on the course, and nearly a minute off the five-thousand I’d run on the track back in July.

Unremarkable was the best word to attach in terms of comparison to past performances, but in contrast to the weeks before – and indeed the very day before when I couldn’t even muster eights on a short outing – it was more than pleasing. So maybe part of this whole pity-prediction-performance problem was indeed some welcome healing, helped along post-race by the burgers, the beers, and the buds (the running buds, mind you, they had good beer). And if so, that’s not a problem at all. 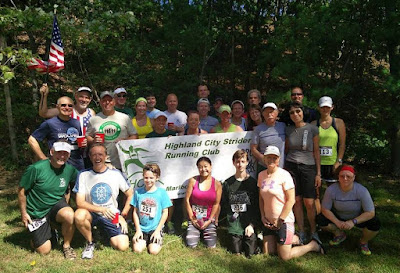 Posted by Gary Cattarin at 11:46 PM No comments:

Out of the Water!


I’d been swimming in the river, and the call came to get out of the water. That famous river, De Nile, and yes, the water was fine, but let’s face it, most everyone looks better soaking wet – that sheen hides oh-so-many flaws. Eventually, though, it’s time to face the music.

This is supposedly a column not just about running, but running through aging, running through the challenges that life and a slowly declining body inevitably line up in one’s path. The life challenges are the fun parts, calling for creating creative ways to notch your runs while exiled to the swamps of South Florida, for example. The aging and declining body parts aren’t always as much fun. It’s a trick to balance those mounting limitations against the motivation to defeat or minimize them as long as possible. So we push and we push and generally carry on, until there comes a point where perhaps we really shouldn’t.

And therein lays a quandary. I often advise that it’s more important to be running in ten years than it is to be running next week. I’m just not very good at following that advice. It’s inconvenient. It gets in the way of preparation for races. It interrupts consecutive day running streaks. It torpedoes mileage goals. And yes, I know that two out of three of those are meaningless OCD-style drivers, but they’re drivers just the same, and drivers deliver motivation, and motivation keeps getting us out there, and getting out there keeps us alive just a little bit longer. We hope.

All of which is how I found myself once again dog-paddling in that famous quasi-Egyptian waterway. With my current streak pushing toward the two-hundred-day mark, having not missed a day since February, and being on track for a personal highest and nicely rounded number annual mileage accomplishment, it was drive, drive, drive toward my fast approaching fall marathon. But I really couldn’t ignore the signs of overtraining – leg fatigue, slowing pace, and worse, I just couldn’t shake the chronic trouble in that left knee – trouble that typically didn’t rise up during my runs (though of late had started to), but that made stairs far more of a chore than they should be.

August closed up, two thirds through the year, two thirds of the way to that nice round number on the odometer, but only just two thirds – no buffer for tapers, time off, or anything. Any training interruption would mean falling behind. But I began to question whether I’d hold out even till the fall marathon, let alone till New Year’s Eve. I really had no choice but to follow my own best advice. Out of the water, son, you need a break.

One would think a week off, coupled with a hit of my favorite anti-inflammatory, would set things right in the world and let me return rested and ready to rock. Sadly, it hasn’t worked out that way. To my dismay, the time since that week off has been ugly, hindered by quads that feel like I just started running, legs that are celebrating the hundredth anniversary of Einstein’s publishing his theory of general relativity by sucking up energy and converting it into leaden mass, and worst, a hamstring that pulled itself for no reason (if you pull a ham, does that make it pulled pork?). Since these woes came on from not running, I’ve taken the approach of trying to cure them by running, and slowly, oh-so-slowly (which has included lots of miles taken oh-so-slowly), I’m starting to move a bit toward normalcy, with big jumps backward like today’s seriously tortoise-like wind-suck-fest. Once again I ask, is this the beginning of the big slide downward?

Saturday’s local five kilometer jaunt, a race that I won last year, might not even get off the starting line. Game-day decision, as they say. And if it does, it will only be through the luck of the no-shows that any respectable placing shows up next to my name. Then again, there’ll be burgers and beers, and even amidst self-doubt and angst, you’ve got to keep your priorities straight, right?
Posted by Gary Cattarin at 10:46 PM No comments: