If you’re going to jump off a cliff, you might as well make it a high one and make the leap effective. After all, what’s the point of simply breaking a leg or something? Do it right, do it big. And so two months after my first win at the Forrest 5K, I crossed the line (almost) dead last at the Thanksgiving Day Pie & Glove 5K in Corning, New York. First to last in two months flat. Except this really was no cliff jump, this was a triumph.

The bad news is that I didn’t run it. Couldn’t, really. The pesky leg injury that I’d so hoped was healed in my last post in fact hasn’t healed. A few short test runs back in mid-month convinced me that yet more time is needed. They also worried me that those few short test runs may have re-injured or at least somewhat set back the healing. Maybe medical technology does need to be engaged at some point here, if for no other reason than to put a definition on the length of the break I need to be whole again.

But having running off the table didn’t have to take this new family tradition off the table. I elected to walk it instead with sis, who just a week earlier had wrapped up months of treatment – surgery, chemo, and radiation – in her battle with breast cancer. She’s kept a positive outlook through the whole fight, and while I know this will make her blush a bit, I’ll say it because it’s true: she’s set a fine example of how to take on this tough challenge. And what better way to cap off what we hope is her victorious fight than by getting out there on the roads and covering the distance. Speed didn’t matter. I was proud to walk with her. And of course I let her – and my wife – beat me across the line.

All that being said, this was a new way to do a race, and it was, quite frankly, a lot of fun. No fretting about what to wear. It was cold, windy, and snowing lightly, so just bundle up. Who cares about performance clothing? In fact, I don’t think I’ve ever had more race-specific clothing on at one time ever, not to mention in a race. Lessee, Stu’s 30K t-shirt (cotton, of course!), Reach the Beach hat, Boston Marathon jacket, Central Mass Striders gloves… I was a walking billboard. In blue jeans. Yep, race gear! 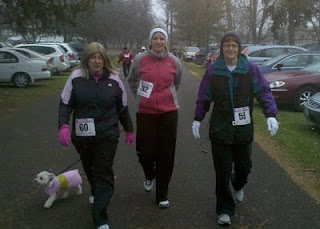 No fretting about arriving in time to warm up, hit the porta-johns, suck down a Gu, no fretting at all. We showed up about thirteen minutes before the gun, grabbed our numbers and high quality gloves (it is, after all, the Pie and Glove, and yes, you do get gloves), and wandered to the back of the pack.

The gun? Oh yeah, sure, whatever. Let’s go for a stroll. With numbers pinned on us. Kind of silly in a way, but let’s face it, the weather wasn’t so great and without those numbers sitting down on the pre-registration table with our names on them, we might well have stayed home. Instead, though it wasn’t a run, it was still a good bit of mild exercise and a fine dose of guilt alleviation for the coming feast.

And we chatted. And wandered. And watched all the people running when the course doubled on itself. And had a fine time. 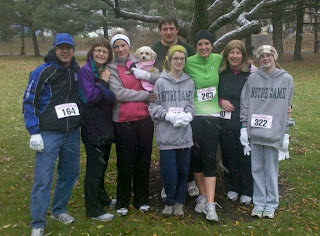 At one point sis asked what I thought of all those people struggling to finish a race at the back of the pack. That’s easy. I hold them in the highest respect. They’re not on the couch. They’re out there. Speed simply doesn’t matter. And frankly, I certainly don’t want to be on a marathon course for five or six hours – they’ve got to be respected for their determination.

But on this day I was behind all of them – about eight hundred of them – save five or so walking behind us. So what? Sis, we believe, and we pray, has beaten cancer, and walked 5K at a decent pace to prove it. Hats off to her (at least when we got back inside and it was warm enough to take our hats off).

I am, however, going to have to hold her to her promise to run it next Thanksgiving.
Posted by Gary Cattarin at 11:22 PM No comments:

Fractured, of a Sort

I’ve let you down, I know. All eight of you (I’m being optimistic). Never before have I put such a fracture in my writing schedule, and I hope to not do so again. But I blame this fracture on what else – ? – a fracture. Of a sort, or so I think. Not that I deserve an excuse. Fracture or not, there’s been plenty to write about, even ignoring the national embarrassment of the tea party, topics which I’ll try to visit in the next few weeks. But I’ll claim an excuse anyway.

One aspect of the Walk-On Marathon I neglected to mention in my last posting long, long ago was the Magic Shoes. Ironically, while tooling down the highway earlier today, I was listening to one of Chris Russell’s podcasts where he addressed the question of whether to wear racing flats in a marathon. His answer, completely logical, was, “Not if you haven’t tried them on a long run before.”

Of course, common sense says don’t change anything on race day. I know that wisdom well, but did exactly that last month: changed something on race day, and specifically, ran it in the racing flats, or in my case, the near-racing flats, the frighteningly yellow and gloriously airy New Balance 904s. A bad idea if I’d been racing, but as I’ve said, the New Hampshire Marathon was anything but a race for me, and knowing that going in made it a fine time to test out the idea of wearing racing flats for 26 miles – racing flats I’d never worn out of the lower half of single digit mileage. But racing flats that had – perhaps – helped me win the Forrest 5K with their liberating lightness, and which might possibly help carry a hopelessly undertrained old fart through an unlikely marathon.

And they were great from the standpoint of perceptible reduced mass, though being considerably less meaty than my usual tires, I fully expected more foot fatigue than usual. I was not disappointed. Or at least I was not wrong. By twenty miles in, yes, my feet weren’t too happy. But then again, neither was the rest of me, so the experiment was inconclusive. On the other hand, my leg injury was completely silent all day. On the third hand, my knees were uncharacteristically tender. Was it the shoes? Hung jury on all counts.

What was conclusive was that while the leg didn’t hurt that day, when I hit the roads a few days later, it was unmistakably uncomfortable. Having nursed this particular wound since late August, having gotten through the marathon that really wasn’t supposed to have been, and having no big events on the schedule in the near future, I made the command decision that I was, in fact, riding a stress fracture and that it was time to heal. The fact that my knees were sore as hell made the call considerably easier. Maybe the shoes contributed to making it easier to make that decision. God works in weird ways.

It was pretty tough deciding to take a solid month off for an undiagnosed injury. I don’t like taking two days off consecutively, let alone a week, let alone – a month? A break longer than any since the surgery? Having not seen a doctor?

Truth is, if there is pain in the middle of your shin, your choices are pretty limited. Shin splints, stress fracture, or alien intervention. While I can’t rule out the latter, the remedies for the first two are pretty much the same: rest. The only difference would be the duration of said rest, and it is of course frustrating to not be certain, but the reality is that I could spend a lot of money and time to see doctors, get a bone scan, await results which would probably be inconclusive. Been there several years ago, done that, got the chance to watch radioactive atoms die on my behalf, lighting up the monitor with a cool image of my bones, but still didn’t really know in the end… And the answer will be? Rest. And by the time all of this medical wonder was done, I would have already spent a lot of time at… Rest. So why be American? Why throw money and medical technology at something that will, if rested, heal; something that there’s really nothing else to do about anyway?

Penning my name on the Injured Reserve list meant giving up my publicly unspoken but very real goal of a two thousand mile year. I’d been on track through the first half of the year, and while I’d fallen a bit behind through the summer of injuries, said goal was still within reach. I’ve had my eyes on that one for a number of years, but something has always gotten in the way. And so it would be again.

I tell the kids I coach that you can’t worry about running tomorrow or next week; you need to worry about being able to run next year and through the next decade. It’s good advice, but like most good advice easier to give than to live by. This has been a good exercise in chugging a bottle of my own medicine.

Four weeks. Uncharacteristic guilt in eating. Crabbiness, just ask my wife. Fear that every little jog – casually across the field while coaching my middle school cross country team, across the parking lot in a hurry, and so on – would cause re-injury. And the irony and insult of traveling to my company’s annual sales meeting in Hell (er, I mean, Las Vegas) and in the first hour upon arrival running into three colleagues telling me that this year they’d brought their running gear to run with me…and I can’t. Just about killed me.

And then the angst, is four weeks enough? At t-plus four weeks, I hit the roads for a test jaunt, and still felt a twang in the shin. Harmless test? Or would that reset the clock? Another four weeks? Please, no!

Another week, another road test, this time no pain. Hope. And a few days later, a trail run with one of those colleagues I’d had to deny in Vegas, trails being ostensibly gentler than roads but in truth, this being New England where we grow rocks for fun and profit, not. And in the last quarter mile, a twang. Oh miserable angst. Say it ain’t so.

Tomorrow I’ll give it another roll and see how the dice land. It’s just going to be dicey for a while. I just keep telling myself that a fracture in my training is a blip. While I’d like to be running next week, I’d rather be running next year and next decade.
Posted by Gary Cattarin at 11:49 PM No comments: