It’s a good thing I don’t have many readers. When I go two weeks without a posting, I get no complaints. My excuse? I’ve been absorbed with race planning, which seems simple, except that it’s not.

It’s payback time. For all those races I’ve attended, for all those bits I’ve praised and all those items I’ve groused about, now it’s my turn. And knowing how persnickety I can be makes me want to get it right only that much more. The basics are obvious, but the details perplex, and it’s the execution that counts. You just can’t predict what’s going to happen on race day, and you won’t have much time to fix it.

Let’s back up a bit. My club holds a couple of races each year, but they’re extremely casual. Our Laborious Labor Day Ten Miler and Thanksgiving Tough Turkey Ten Miler (or whatever we call it?) are no-fee races. We collect food for the local food pantries as our entry fee. Along with no fee comes no expectations. No awards other than the honor of victory. Any refreshments are whatever club members decide to bring. It’s all casual. Nobody complains. What, they want their can of corn back?

But now that we’re a real live incorporated oo-fish-ee-al club, well, we want to do some of those oo-fish-ee-al club things. Like expand our outreach – after all, we do have a mission to promote health and fitness through running. Like build up a collection of equipment, like timing gear, to run a little higher-brow events. And so on. Stuff that requires coin.

At the same time, we clubbies have been lamenting the passing of the other-than-5K race. Along with the expansion of the sport from the midpack back – which isn’t a bad thing, mind you – has come a proliferation of 5K races. Several per weekend around here. All for some great cause, some so much for their great cause that I’m sometimes amazed to see what you can pay to run a 5K. Call it the dumbing down of the sport. Don’t get me wrong, I’m thrilled that more people are running, and though the 5K isn’t my favorite – way too short and fast for my tastes – it’s a fine event. But variety is the spice of life, and outside of the major races, variety is fast becoming an endangered species.

Such was born our new race. The First Annual Running With the Wolves 10K, on a weekday to avoid conflicts with other races, in the evening under the full moon – thus the name. A real-live oo-fish-ee-al event with a real live entry fee for a real-live great cause. Us. That sounds kind of self-serving, but it’s not. We’re a tax-exempt charitable organization. None of us profit. All of us want to spread the word and make our world healthier. We’re not fighting one disease. We’re beating back all of them, more or less. You can fight heart disease when it happens, or you can fight to stave it off through fitness. Our charity is the latter.

That being settled, it quickly becomes amazing how much needs to be done to assure a quality event; quality being a requirement in my mind when people are paying money to run, and we want to be sure there’s a Second Annual Running With the Wolves 10K. It takes a lot of people, and we’re a small club. We quickly laid down the law: club members won’t run in this event, they will run this event. Good thing, because it’s taking most of the club to cover all the bases.

I’m not the race director. And I won’t call myself the assistant race director, because that’s not fair to the core members of the race committee. But the amount of involvement makes it feel that way. Some of it is my own fault. As I said, I’m persnickety. They don’t call me “Slightly Obsessed” for nothing.

My number one pet peeve? Poorly measured courses. When I run a race, I want an accurate measurement, so I can compare today to my previous races. My past inquiries about course accuracy have ruffled a few feathers. So it’s only right 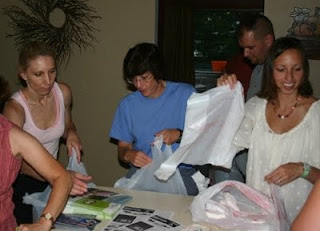 that if we’re to get any complaints on that score, it should be my problem. Solution: measure it myself (with help, of course). Several times. Which takes quite a lot of time – measuring and re-measuring and marking out 10 kilometers, getting access to the stadium for our finish, and all that. If you, the racer, don’t like it, complain to me. I deserve it.

Somehow I landed the t-shirt design and acquisition task. Again, sounds simple. Not. Twenty seven phone calls and one hundred eight two emails later, piles of shirts arrive. Then there’s the scoring. We don’t own timing equipment and scoring software, so we’ve borrowed gear from our friends at a neighboring club and I’ve written the scoring spreadsheet from scratch. Designing and ordering banners. Handling the funds, of course, as I’m the green-shade guy of the club. And more…

It’s been a lot of time on my part, but it’s worth it – it’s cool to give this back to the running community. And no matter how much it seems, there’s so much more beyond me. Our race committee and general membership have been fantastic, beating the bushes for sponsorships, planning food, water, medical, traffic, marketing, registration, cleanup, awards, the kickin’ post-race party, you name it. Mine is but a fraction of the whole task. This club is awesome.

But it all comes down to a few hours Wednesday evening, and once that time arrives, our ability to fix any oversights is constrained by time. Very, very, short time. I think I’ll be sweating as much as if I ran the race. And there’s that forecast of thunderstorms to deal with, too…

Tonight our crew assembled – about 25 of our 35 or so volunteers – to go over all the plans, stuff goodie bags, and of course, stuff ourselves. We tried to think of everything we haven’t already thought of, and we rehashed everything we have thought of. And we know we’ve probably missed something – something that will appear at the most inopportune time.

I’ve got great confidence in this team, but I’m still sweating.
Posted by Gary Cattarin at 12:20 AM