The Boilermaker is big. Twelve thousand runners is a lot of people even when you’re used to 27,000-plus at the start of Boston – and that’s just the 15K main event, not to mention a few thousand more in the 5K. I find it hard to comprehend where they all came from and where they all go.

The scale starts to sink in when you stop at the Thruway rest stop 10 miles before Utica and it looks like the starting area itself with so many runners lined up outside the restrooms. Woe to those non-runner travelers who happened to stop in, wondering what hit them. But Marge, where did they all come from? Why are they here? And why do they all look so underfed?

The scale really sinks in until you watch them coming at the finish line. And coming. And coming. And those are just the ones a half-hour behind me, after I finished, after I wound my way through the labyrinth of Utica streets to get the other side of the line to find Sis. There were thousands I missed. And thousands more after I left for the party – the party of planetary proportions.

But, back to the race. After being dropped near the start by Ace Support Team Sis & Phil, niece Kris quickly found a friend (how this happens amongst 12,000 runners is beyond me, but it happens) and she headed off to her “Gray Corral”, not really a corral at all, but the area for the 8,000 or so unseeded runners. I was seeded in the “Blue Corral”, the 500 runners behind the 300 “White Corral” elites. I’d felt a tad guilty since I’d turned in a seed time of 59 minutes based on last year’s pre-surgery performances, not knowing where I’d be by race day, but I quickly found that even my race-day target of 62-64 minutes would have gained me the same corral. Guilt alleviated.

Despite the scale, starting coral organization was excellent, though traffic control a bit draconian with a few over-zealous marshals. Once I found my corral, I headed off for a warm-up, only to be told on return that I couldn’t get back in without circling an extra three blocks and re-entering from the rear. I figured out this was so they could open the white elite corral to an adjoining parking lot for their warm-ups. Nice, but a little frustrating for the rest of us. To be fair, we’d been warned via the map of the starting area, though the map was a little incomprehensible, as was their map of the finish & party area – a simple arrow pointing north would be nice! Whatever, minor gripe.

What a morning! Perfect weather, among the coolest in Boilermaker history, sunny, gorgeous, a bit breezier than expected. Ready to roll on my first real long race since the surgery, Boston having been a purely recreational outing. And speaking of Boston, there in my corral, a few bodies away was none other than Boston Billy himself, Bill Rodgers, the guy largely responsible for my love of the sport. My hero from First Lap days. I’ve seen him at expos, but always behind a line of well-wishers longer than I cared to endure. Here, it was easy. I sidled over, greeted him – nicest guy in the world – and of course invited him to the 10K my club is putting on next month. Yeah, right, I know, but might as well, you never know. Even at my age, it’s still a thrill to have started the race with him. Way cool.

The ropes dropped, we did the surge-forward thing, the gun, we’re off. Uphill. Now, I’m one of these inertial runners who takes a long time to warm up – usually about 5K in a typical 5K race – so I’m not real keen on any start, but the Boilermaker is all uphill for the first few miles as you head south out of the river valley – not big, but noticeable grades. And I noticed it. I felt pretty much awful, like I was running in the high 7’s as opposed to the 6:50 pace I’d stated as my goal or the 6:40 I had in my head as my real goal. Ugh. But mile one clocked in a 6:28, surprise, surprise. I should know better, happens all the time. Well, at least I knew why it felt like an effort!

I forced myself to back off a bit, and dropped the pace for miles two and three to the high 6’s, knowing the golf course – the big hill – loomed at three, but it didn’t help much; it was a struggle, the body just wasn’t happy. And then, our reconnaissance mission paid off. The golf course climb was… nothing. Its most memorable moment? The band hammering Zeppelin as we entered the course. Just one of the seeming bazillions of bands on the course, but later Kris would recall these guys too – serious rockism. Utica pulls out all the stops and does it up in style.

Just like that, we were over the top and screaming down the other side, going sub-6 for mile five, clicking 33 minutes flat through five, 6:36 pace, and suddenly the morning had turned around like I never expected. Sure, I was working hard, but I was ahead of my private target with more downhill than up remaining.

And then, since this was becoming a roller-coaster day, along came mile seven in roller-coaster style. I’d warned Kris about seven the day before. At its start, the city boulevard turns briefly into a freeway. I’d warned Kris that car-scaled roads play games with your mind. You lose the perspective of houses passing by. The crowds thin. The same distance that would fly by on a city street stretches mercilessly. And it did. She later agreed completely with my prediction. But worse, having checked out this part of the course in the car in a thunderstorm, we’d both missed the insidious upgrade that followed the freeway stretch and continued into mile eight. It caught me off guard. My cruise mentality took instant hit points, and minor agony ensued till the summit.

But the eight was another screaming downhill, even screamier than I’d expected. I’m not a strong downhiller; I have to force myself to stride out and take advantage of the hill – more speed, but more work, too. Which made nine, tough already, that much tougher. Nine hands out a slow rise late in the game, a lung-burner, a test of will. I had a good one going, better than 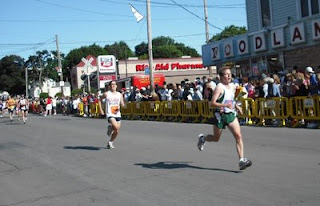 I’d hoped for the day, and here was where I’d keep it or lose it.

Over the last top at nine miles. All downhill to the end. The sun was brilliant, blinding, making any hopes of locating Sis & Phil pointless. Lungs screaming, sporting my usual death-warmed-over look (that’s me in green at 9.2). Yet it’s funny, no matter how we’re hurting, snippets of our surroundings stand out. 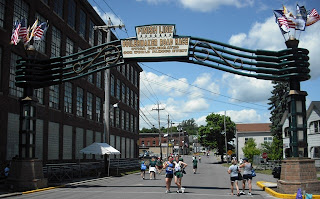 I suddenly noticed the fresh tar over the previously exposed trolley tracks just before the finish. That one was for me, Mr. Faceplant of Wineglass. I’d promised Sis I wouldn’t do it again, and the Gods of the Boilermaker heard me and helped assure no repeats. Cool.

It’s easy to see that this is the biggest event to hit Utica all year. Other races construct 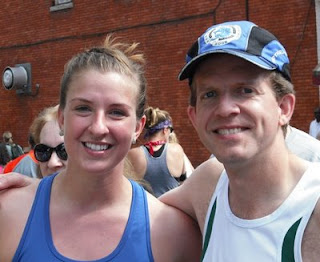 elaborate finish chutes, and pull them down by the end of the day. In Utica, the Boilermaker finish is permanent; a glorious cast iron arch that stays all year, reminding the locals that once a year, the world really does come to them. I passed under that sign in 60:37, well ahead of my 62-64 minute target, having turned in an average 6:30 pace and gotten elation in return. It still didn’t feel like last fall, it didn’t feel like a cool easy comfortable stride, but most likely my recollection of what it felt like last fall, before the injury, before the surgery, is unrealistic. Memories can be rosy. I’ll bet it hurt back then, too. Bottom line, I was a happy guy.

And Kris was a happy girl. She made it home right on her target. She’d wanted an hour and a half, 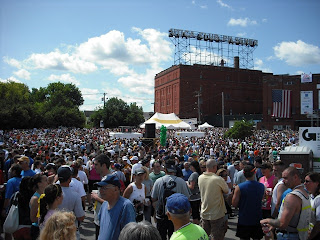 and she pulled in at 1:29 and change. Best of all, before we left town, I heard her say she wants to do a half-marathon. Yes, this disease is infectious! Of course, the biggest party you can possibly imagine, complete with more Saranac on tap than you’ve ever seen and a killer flyover, afterburners and all, by the guys out of Rome Air Force Base, didn’t hurt. Nor did knowing that half her classmates ran it as well – and yes, she somehow managed to find them in the sea of humanity – which made an even better event for her. You couldn’t script a promo for running any better.
Posted by Gary Cattarin at 6:00 PM