Yes, I know that races are held every day, twice on Saturday, and it’s no big deal. But when it’s your own race, when it’s your first full-scale event, it is a big deal. And it was. The First Annual Running With the Wolves 10K went off with a howl, and came off like, well, clockwork Wednesday night, and there was great rejoicing. 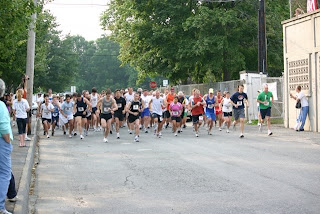 Wednesday was an exercise in panic avoidance and bullet dodging. A few items short of a million could have gone wrong, but they didn’t. The Gods smiled upon us. My club-mates and I breathed a huge sigh of relief and a shout of joy when it was over.

First, it didn’t pour. Just not raining at all would be a tall order, the way our weather has been this summer. Wednesday was not only forecast to be the hottest day to date this summer – the first targeted to hit 90, which is pretty unusual for that not to have happened by now – but was, of course, also expected to be punctured by thunderstorms. Some severe. A real Weather Channel kind of day. Live by it, baby. 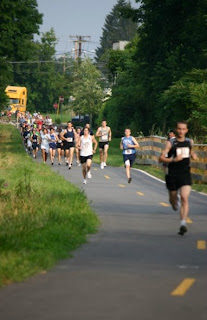 As of the night before, those storms were forecast to last until…? You guessed it, 6 PM of course, right up to the starting gun. Make me sweat. But no worries, the revised forecast Wednesday morning cleared up any concern over whether they’d wrap up in time. Instead they were forecast to last into the night. Gee, uh, thanks. Yet, as the afternoon rolled along, those menacing green, yellow, and red blotches on the radar formed to our west, approached, and then magically parted and avoided us.

Second, and probably most important, we built it and they came. Between sponsorships and pre-registered runners, we were financially whole no matter what. But if they didn’t come, it wouldn’t be much of an event, now, would it? And that wouldn’t do much for next year. But they came, oh glorious runners, they came! To paraphrase Jackson Browne, “People you've got the power over what we do, you can sit there and wait, or you can come run our race!” They didn’t stay-yay-yay home, they came. And I thank each one of them. 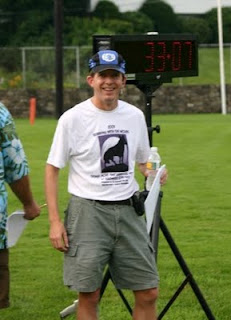 And third, everybody, and I mean everybody, pulled through. Our club is small, but it’s tight-knit, and it’s fantastic. Everyone covered their appointed tasks and anything else they could find that needed to be done. Sure, there were a few comical glitches, like me holding up the start for two minutes trying to get our one-mile splits person back on the phone. But all in all, it was smooth city. The traffic was marshaled. The runners were processed, hydrated, guided, cheered, and awarded. The refreshments refreshed. Even our medical tech volunteers had a customer, who happily was A-OK in the end, but gave us the satisfaction that we’d covered that piece of the plan. The newspaper sent a photographer, as did Jim Rhoades. The city opened up the field for our stadium finish, and even painted us a finish line. Our friends at CMS lent us gear that made our event safer, and look slicker, too. Our on-site sponsor The Karate School 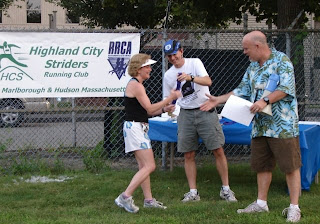 opened her business for our headquarters. And our post-race party? Well, not a lot of the runners showed, but at least for us, dinner for $3, cheap (yet good) beer, and two live bands. Can’t beat it.

Our course turned out better than planned. Since it hooked back on both the outbound and inbound, spectators could get from the start/finish onto the course in time to cheer the field. Traffic control at our first rail trail to road crossing was easy – we filled the road with fans! When the smoke cleared, the women’s race was ruled by the seniors who took the top three spots, with Carol Allain 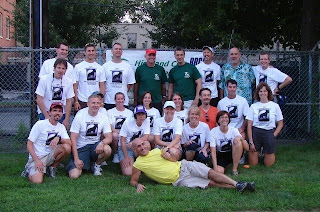 of the North Medford Club leading the way, while Julien Dimaria took the men’s race in a smokin’ thirty four minutes flat. We knew it would be a fast course, but yee-haa! We’ve got a mark to target next year!

These individual attributes read like a laundry list, which could go on. But they miss the point. It was a real race. Walking around, it felt like a real event. Small, but real. Falmouth must have started this way. Or the Boilermaker. Happy people enjoying themselves, at least once they caught their breath. We gave one back. We pulled it off. And that felt fantastic.

Change of topic…On an unrelated note, today, August 7th is always a special day in my calendar. It marks the day back in 1981 when I didn’t die, but came darn close (see posting from last year). Twenty eight years later and I have the joy of my wife and daughters and am healthy enough to pursue this obsession we call running. If I hadn’t been running and fit then, I wouldn’t have made it. Nor would I have stood a chance save for my sharp-eyed doctor who had a hunch as to what was going on, was right, and moved fast enough to save my life. Thanks, doc.
Posted by Gary Cattarin at 11:00 PM