If you’d asked me before I started my Second Lap about some of the iconic far-away races I’ve since run – take the Charlottesville 10-Miler and the Stowe 8-Miler for example – I would have stared at you with a blank face. But the Utica Boilermaker? That’s one that’s always been on the wish list since those high school First Lap days. 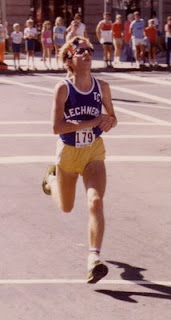 I feel like I’ve shared a connection to this race. Back in the spring of ’78 I was a high school freshman in Upstate New York, I had just started running, and the Utica Boilermaker was born as an instant hit. I recall my friend and running mentor Cliff extolling it in its early years. It quickly became a big destination for runners in my local crowd. It was one of those talked-about races. And I’d forgotten until I read the race program that I’d had the privilege of having both of its second year champions in my circle. I shared high school track and cross country miles and colors with women’s winner Cindy Girard, and ran with as well as wore the decidedly low-tech jersey of men’s champ Tom Carter’s Lechner’s track club (that’s me in 1980 in the hot yellow shorts and geeky socks running for Lechner’s). Tom was an awesome runner back then, and as of the last time I saw him last year, he still is. Oh, and there was that little bit about dating his sister, too, a truly nice young lady. The Boilermaker. It was cool back then, and who knew it would become world-famous?

But I never ran it. We had our own 15K in town, the Forks XV, site of my fastest long race ever, and still being run today, so hauling off to Utica for a 15K didn’t offer any real uniqueness to me. Being in high school, I wasn’t really in the mode of traveling to far-flung races, though there were a few notable exceptions, stories for another day. It never happened, the First Lap ended, and the long drought descended for that 25-year vacation.

Until one of my running club-mates suggested we organize a club trip to…the Boilermaker! That nascent idea was suddenly thrust into reality. Of course, I’m in!

Well, not unlike last year’s “club” expedition to the Stowe race, which turned into a massive team of, uh, two of us, this year’s “club” expedition turned into a massive team of, uh, three. OK, that was a 50% boost, I’ll take it for what it is. But since the other two had their own family and friend agendas, it turned out not to be a club expedition at all. Call it a club catalyst effect, instead. Ahh, so what, I’m in, and free to pursue my own family agenda.

That family agenda centered on my niece, a recent convert to the mental deviance of running. I’d mentioned in my last post that this was her first race, but forgive me, I lied. She’d run a 5K last fall; this was to be her first long race, at this point for her a challenge purely for the distance involved. Knowing that I share at least a bit of the blame for her new affliction, it was pretty exciting to me to see her bite this one off. We worked out some pretty elaborate logistics to join up, plans made far easier by the interest and help of my sister and her companion Phil, who’d been my Ace Support Team for Wineglass last fall. I had to promise to them I wouldn’t fall on my face again.

I love small local races for their simplicity, ease of logistics, and, I admit it, the chance to score an age group spot or a good raffle prize. But I love the big races because of the magic of assembling so much talent in one place, and the fact that most of that talent is packaged in the most unassuming people you’ll meet anywhere. Unlike typical overpaid sports superstars, elite runners blend into the scenery as normal people, because they are, other than their extraordinary abilities. Kris got a quick taste of this defining aspect of our sport quickly, over lunch at the Subway (after, I note, we’d arrived in Utica 10 minutes apart, having converged from 350 miles distant, not bad timing, eh?). We struck up a conversation with a runner type and her family, only to discover she was in fact an elite master, one who’d shared the vaunted church basement with Kara Goucher & Company at the starting line in Hopkinton, one who rubbed elbows with the fabulously talented top women of America. Yet she was more than interested to chat as any other runner. It’s just that kind of sport, and that’s one of the reasons I love it.

After hitting the expo – somewhat of a disappointment for a race the size of the Boilermaker – Kris and I set off to reconnoiter the course, partly on wheels, partly on foot. We popped in a four miler, looping over the biggest hill on the course where it climbs above the valley through the city golf course. The course profile on the web made this one look like a killer even to me, the “seasoned runner”. Facing the challenge of the distance, let along the hills, it had given Kris considerable apprehension. “Know your enemy,” I told her, and it was a lesson worth learning. We came, we ran it, we laughed. Piece of cake.

The skies poured forth their fury as we scoured the rest of the course (comfortably behind the windshield) and made our way back to Base Camp Syracuse – Kris’s apartment when she’s in school – for dinner with Ace Support Team Sis & Phil. Forces of nature – more storms, and a foolish neighbor loudly unloading lumber late on a Saturday night – staged a conspiracy to ruin our early sleep, but failed to hamper us. Four AM would come too bleeping early…

Next posting: Race day
Posted by Gary Cattarin at 11:59 PM