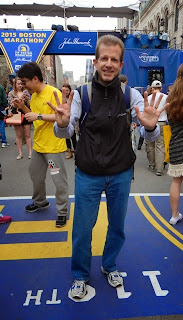 Twenty-two marathons including nine Bostons (even if it is a little hard to see those nine fingers in the pre-race photo…). But this one was like no other.

Yes, the expo was filled with Cardboard Mebs rather than Cardboard Ryans, but those details change with the wind (of which we had plenty). Coming off the year of Meb’s American victory gave the race a slightly different feel, but that has nothing to do with why this one was like no other.

In a flashback to Boston Number One, the forecast was big-time ugly. That day, back in oh-seven, the Nor’easter faded and conditions weren’t so bad. But this day, the storm strengthened and conditions grew steadily worse. But that has nothing to do with why this one was like no other. 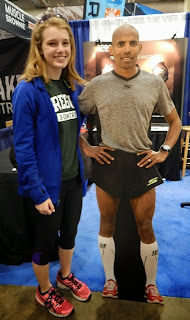 In another flashback to Boston Number One, I started well back in the pack. That day, my number in the six-thousands, earned with a three-fourteen qualifier, put me in the sixth corral. Since then, I’d moved up and grown accustomed to the rocket-like starts of the first and second corral neighborhoods. But this year, my injury-weakened three-oh-seven qualifier brought me back, earning me a number back in the six thousands, though with the current system that was good for only a Personal Worst seventh corral. But that has only a little to do with why this one was like no other.

In a more recent flashback, two years back in Boston Number Seven, I smoked my fastest ever. That day, the finish arrived at two-fifty-two and change, bringing two hours of elation before the bombs blew. This year, I snuck back into the sub-three range for the first time since that date, but made no serious threat on that personal best, so clearly that’s not why this one was like no other.

And to confess a lie, I’ve repeated to many that I’ve never run a marathon in negative splits, that meaning running the second half faster than the first. In truth, I went back in the logs and found my memory to be faulty. I’d done it once, at Bay State, in ‘oh seven, and while that race was a watershed, being the day I figured out that a marathon can be raced rather than simply run, it was a rather up-and-down affair pace-wise on a fairly flat course. That’s quite different from the difficult Boston course with its early downhills and late climbs, and besides, I didn’t manage to run this one in negative splits anyway. But I came darn close. And I ran the most consistent, controlled marathon in any of my twenty-two tries. And that’s what made this one like no other. 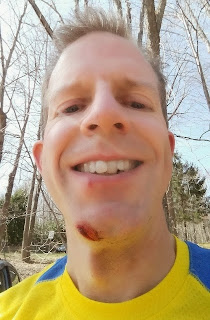 I came into this race as a Designated Badass, looking my best following a face-plant on an easy taper-down trail run a mere four days before the big dance. A half-dozen miles into an easy saunter, one quick distracting glare of sun blew out my focus, turning my toe into a grappling hook trying to extract a root that obviously wouldn’t budge. Physics won. Fortunately there was no one in the forest to hear either the tree falling or the subsequent oaths emitted. This gash probably qualified for medical attention, but I settled for quietly oozing my way home and knowing that I could probably scare off anyone I couldn’t outrun on Monday.

I also came into this race knowing I had three fairly solid months of training, despite Snowmageddon, capped off with Hard Core March and that terrific final long run with The Brit a few weeks back. I felt more prepared for this one than I’d been since the ‘thirteen race, but at the same time, still figured that sub-three was a stretch, especially with the forecast headwind. With conditions as they were, I moderated my goal and set about solely to improve my existing ‘sixteen qualifier, which at three-thirteen would get me in for next year’s race but almost certainly relegate me to the second wave of starters. I figured the lower half of the three-ohs would be adequate to do the job, and I’d save the heroics for a day more attuned to speed. So rather than lurching aggressively down the early descents from Hopkinton, I didn’t fight the Corral Six traffic, and clocked the slowest first four miles of my seven competitive Bostons.

Despite the leisurely start, it wasn’t a stroll in the park. While the crowds lessened the impact of the headwind, it was omnipresent, and worse, it led to the less-than-savory choice of constantly adjusting stride to draft off endlessly changing running windscreens, or enjoying the freedom of space, only to be instantly reminded by a blast against the body of why space was not a good thing. Unlike that last long training run, there was no easy breezy fluidity to my stride, other than the fluidity that began precipitating around Framingham Center. A half dozen miles in, as the rain started to add wet to the duo of cold and windy, my usual mental math games started to register concern as I wasn’t putting much time in the bank. But on the other hand, I was measuring that banked time against the three hour mark, and while I knew I’d love to get back under that barrier – a two-fifty-nine-fifty-nine is light years from three-oh-oh-oh-oh (said the guy who ran three-oh-oh-oh-seven a few years back) – the cooler part of my head (weather-related pun intended) kept up the mantra that low-three-ohs was all I truly needed. 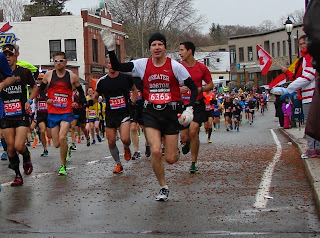 I’d hear later that some succumbed to hypothermia induced by the on-again, off-again forty-five-degree rain and wind. My recollection of when it rained and when it waned is at best damp and musty, but I don’t recall becoming truly soaked till the hills of Newton. Dearest Spouse’s and Dearest Daughter the Younger’s photos at the Lower Falls bridge reveal only moderate wetness, though I retained both the hat and gloves I’d figured on chucking. When the rain truly came, those gloves would become sodden leaden bombs, on one hand sucking heat, but on the other offering at least a tiny modicum of shelter from what, by Beacon Street, had become a truly unpleasant day at the office, rescued only by the fact that the race was going, er, swimmingly (sorry about that one). Images shot by the Very Expensive Race Photographers (which, respecting their copyright, I cannot reproduce here) could be mistaken for sea otters.

Any lingering doubts about splits versus perceived effort vanished in the hills. This trip wasn’t quite the spring-stepping romp of three weeks earlier – this time I did at least notice the second hill – but it was obvious that compared to days when I’d turned to chopped liver in this stretch, on this day I was the chopper, picking off fading runners constantly (I’d finish about four thousand places ahead of my bib number seeding). Heartbreak came and I was over the top feeling fully under control with only a mild decrease in pace. Mental rocket-fuel poured into the system. Mile twenty-two, coming down the backside, was the fastest of the race – a trick never before seen in my Boston experience. Past the graveyard, through Cleveland Circle, onto Beacon, in control. At twenty-four, a whoop and a high-five – so strong it almost knocked me for a loop – from Greater Boston Tom convinced me that it must’ve been visible that I had this one in the bag – another shot of adrenaline. Twenty-six wasn’t easy – it never is – but when the post-race hypothermia cleared, I’d see that I clocked the fastest last four miles of any of my nine Bostons.

It was like no other. The combination of moderated goals, early race traffic, and a conservative approach to retain strength to battle the elements resulted in the most evenly paced marathon of my career. I’ve got to get a bit nerdy here to make the point, but it’s worth making. Self-recorded mile-by-mile splits begin to tell the tale, deviating only for the hills of Newton, and then not much: 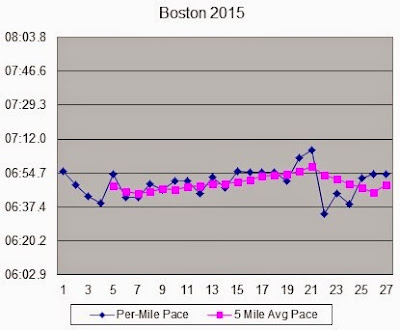 Five kilometer splits from the timing mats paint an even more pothole-free picture, courtesy of the fact that the thirty-five kilometer split includes both the up and the down over Heartbreak. Max variation was a mere four seconds per mile: 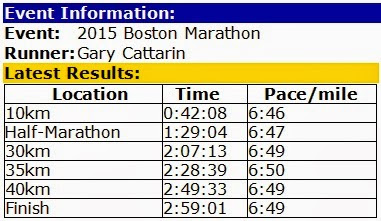 And for one final bit of nerdism, charting my seven competitive Bostons (eliminating my first, not in the same league, and the year of recovery from foot surgery, a recreational meander) makes the start and finish of this year’s race stand out. Other than a slow first mile in ‘oh-eight, quickly averaged out, this year’s edition was the slowest start, followed by the fastest finish: 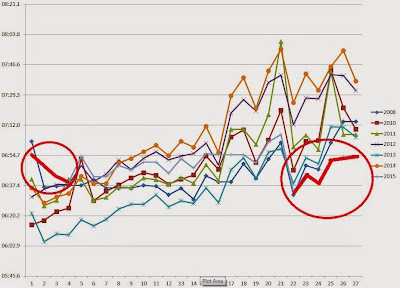