[Ed Note: This post was written for Level Renner's Boston Legion series, but of course finds a home here at home as well!]

Serial marathoners know the game. Our mileage rises in the spring and fall leading to our typically biannual races, and falls off in recovery. It’s a cycle occasionally interrupted by the inanity of stuffing in an extra outing, perhaps to make up for a bad day at the office, or just to hit a different venue without skipping a beloved favorite, but it’s a cycle just the same, sometimes so cyclic that it might seem you’ve fallen into a rut. And then, if you’re lucky, along comes the breakthrough.

The breakthrough doesn’t happen on every marathon cycle. My last significant one was a full two years back, leading up to Boston 2013. That day, my training partners and I set off for an easy twenty-four, and instead hammered the fastest non-race twenty-plus I’ve ever logged. Three weeks later, I sliced two minutes off my personal best and spent two hours of elation until the bombs blew. But since then, a series of injuries have made subsequent marathon cycles a struggle, and the build up to this year’s Boston hasn’t really been inspiring.

Until Sunday, when I hit the breakthrough.

It wasn’t as fast as the epic breakthrough of 2013, but I’m one surgery, one brush with mortality, several injuries, and two years older. It’s not that I’m resigned to never regaining that peak of 2013, but I certainly don’t see that return, if possible at all, coming in the near term. Nevertheless, Sunday’s breakthrough achieved everything one could hope for in that Last Long Run, and it came as a very pleasant surprise at that. Breakthrough.

I’m sure there’s plenty of hard-core science surrounding the training value of the long run. Frankly, I’m too old at this point to really care. Gaining an extra two-percent advantage from some highly technical advancement in technique is still not going to win me an age group crown at Boston. It’s not that I don’t have the drive to push to my maximum, it’s simply that running, and running marathons, is a lifestyle that I enjoy, and a lifestyle that needs to fit into the rest of my life with only moderate adjustments. So I don’t adhere to training plans that direct specific workouts for specific days. I know in my head what I need to accomplish, and I know how much time remains before race day. Given work schedules, weather, and how the body feels, I’ll get it in.

The Last Long One should be about three weeks prior, given the cooperation of all factors, but there have been times that I’ve had to push out a couple days, go out at an ungodly hour, and slip it in before work. Happily, this time the Gods smiled on us. Only one of my small gang of go-to long-run training partners was available, but I knew I could count on The Brit for a solid outing and that I would likely be the one challenged to keep up – the ideal way to push yourself just a little bit harder. With a clear forecast for Sunday, I eased off my pace for Friday’s ten-miler, and took a VDO – Virtual Day Off – on Saturday, cruising five on autopilot with my local club, my only goal being our Dunkin’s outing afterward.

While my “prep” – if you could call it that – for the long run was that mere two-day micro-taper, the lead-up was a bit more intense. Following Baystate last fall, I was forced into a two month break to heal an Achilles injury, restarting the engine only in mid-December. About the time the cylinders started firing, we all know what happened next, all nine feet of it. I managed to log decent mileage through the whiteout we called February, but little of it consistent. March became make-or-break, so I poured it on. My theory was simple: make my body completely impervious to the first ten or twelve (or more) miles. Hard Core March kicked off with a twenty-two miler, decent but not terribly strong, added another twenty-three two weeks later, again not a confidence-building outing, packed in over a dozen ten-plus-milers, and had me on a pace for an all-time monthly mileage high.

With the last long one slated, the good news was that my fifty-two-year-old body was withstanding the onslaught well, but the bad news was that my training pace, while improving, wasn’t where I’d like it to be, nor had the feeling of flying that we all crave truly come back since the injury break. And my outlook was not cheered when The Brit and I emerged from the car in Hopkinton at noon on Sunday to find the forecast mild tailwind instead transformed to a rather brisk headwind.

Whatever. Damn the torpedoes. 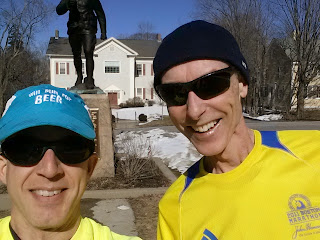 I’m somewhat of a Luddite, wearing only a classic split-taking stopwatch. I run by feel, take splits now and then with mental location notes, map it later, and analyze the data against my recollection of the experience. But I’m not above using extra data when it’s available, and I had two sources: The Brit’s GPS, and the convenient fact that we embarked from the starting line, giving us the convenience of Boston’s painted mileposts. Still, I refused to look for the first few miles. Enjoying the early downhill yet fighting that surprising wind, the Luddite me didn’t want to know. All I knew was that at the moment, I was feeling good, so I figured we mustn’t have really kicked it in yet.

A few miles in, The Brit’s first readout changed that view quickly. To my surprise, we were cutting close to seven flats. I held out till mile six, took a reading the old fashioned way, and confirmed. Now, while that pace won’t win any races, consider that my previous twenty-milers clocked in the mid seven-thirties, and I hadn’t logged a road training run of any distance under about seven and a quarter pace since…well, at the time I knew it’d been at least since the injury comeback, but a later scan of the log hinted it might well have been since last summer. And I wasn’t feeling the effort.

Our banter made the miles melt away, click, click, click. The Brit later compared our pace to a metronome, so consistent we were. He’d spit out an instantaneous GPS reading from time to time confirming such, but I again held off another six miles, where my device reinforced the message that we had a good one going. Clicking off sevens, click, click, click, not quite what I’d need to pop a sub-three in three weeks, but also not drawing on race adrenaline, and still not feeling the effort. Elvis Costello banging in my brain through seventeen, into the Newton hills, I had to ask The Brit if I’d missed the second one; I hadn’t noticed it. An old-fashioned split at nineteen revealed at most a couple of seconds lag on the pace through the first two. That lag vanished as we hit twenty, then over Heartbreak to twenty-one, at the quickest pace of the day. Still feeling strong.

At that clip, we’d land twenty-six in the mid-three-ohs (and it sure felt like no wall was in sight) but this wasn’t a race, and we weren’t pushing it. The confidence that hit when we clicked the split topping Heartbreak was priceless. Mission accomplished, we needed no more to prove our readiness. We dialed it back about twenty seconds per mile at twenty-one and effectively ran a three-mile warm-down, leaving The Brit with his longest training run – at twenty-four – and me with my biggest monthly mileage total – at three hundred ten, (with two days left in the month), and both of us feeling like, given a smile from the Weather Gods, this could be a pretty good Boston.