Not every day is an A-Day, and that’s not a bad thing. No, I didn’t tank at the races today. In fact, I walked away with an absurdly large trophy, the largest I’ve ever received. Large enough that it won’t fit in any of the usual trophy-stowage spots in my already overcrowded basement lair. It’s simply that having what’s clearly an A-race slated for next weekend, followed by yet another the weekend after that, I couldn’t look at this weekend’s event as an all-out, everything you’ve got kind of race. Even my level of obsession knows some bounds. 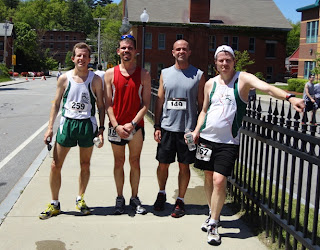 In the balancing act between my local club and friends – the Highland City Striders – and my racing club and friends – Greater Boston – this was a Striders weekend, a Striders race series race, and therefore a weekend to keep the home fires alive. As a local race that I’m only aware of due to my local club, and really only running due to my local club, it made sense to wear green and join our Striders contingent for this weekend’s event. I was sure my red friends would understand – or at least they would so long as I didn’t go and do something silly like win it while not wearing GBTC red.

No worries, that didn’t happen. It was a B-Race day, and a B-Race outing. In the end I landed in third place with the aforementioned massive SUV-scale hunk’o’hardware for – gosh – only second place in the masters – not even winning that! (No, sadly, the wine wasn’t included in the prize, that’s just for perspective.) We’ll call it a hard day’s work and a decent but not remarkable outing, and be happy with it. 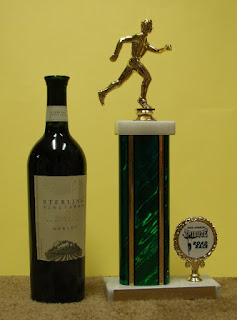 How is it that after Boston’s oven-baked wonder, we’ve endured four weeks of almost universally chilly, often wet, frequently windy, even downright uncomfortable training weather, then suddenly, along comes my first return-to-racing day and… of course, it soars up to about eighty. Go figger’ And like Boston, again it was mercifully non-humid, but oddly so non-humid that I’ve rarely felt so dry-mouthed in any race, let alone a brief five-miler. Sigh, suboptimal weather again. Whatever, it’s a B-Race day.

Now, none of this B-Race talk is in any way intended to demean the fine event known as the Clinton Tribute Road Race, a thirty-four-year tradition with tremendous town-wide volunteer and fan support. Few local races get people out of their houses along the course to cheer, but this one does. The race honors local heroes, and the town stands up and takes note. And the local newspaper in Clinton provides more coverage their local events than anywhere else I’ve seen. No, no belittling at all, they did a fine job. It was simply a B-Race day.

And a wicked hilly one to boot. Right up my hills-in-my-blood alley. I’d been warned, and so I’d scoped the course in response to those warnings. Four notable hills in a mere five mile race., the third being clearly the worst, the last also tough but seemingly manageable, since it’s the second-to-last hill in Stu’s 30K, and knowing that I wouldn’t have to climb the killer final hill of Stu’s made it seem that this one would be a breeze. Well, relatively, at least. Well, not, it would turn out.

For starters, this race starts uphill. Significantly uphill. That alone is pretty unusual. I also note that this one had more than its share of the usual hoo-ha’s who sprint off the line and more or less fall to the ground panting by the first tenth of a mile, and this was even more fun to watch when that first tenth was uphill. We’d cleared them out by the first turn at the third of a mile mark, and by the mile, the field of three hundred had winnowed to a mini-field of three. I’d already long ago heard the last of any footsteps or crowd support for anyone close behind, and just plugged myself into a slot about fifty yards back as John & Brad duked it out up front. I was holding their pace, and not at my limit, but I just couldn’t find it to press harder to catch them. Not that they would have necessarily just let me do so, but… It was a B-Race. 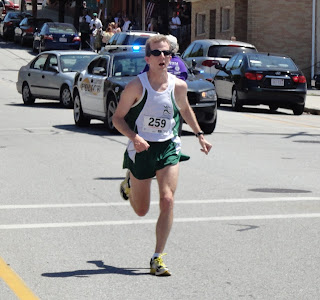 Brad, running second as we worked hill number two, proved to be outstanding at striding out the downhills but not so strong on the climbs – or in short exactly opposite of my strengths and weaknesses. On the flats around the two-mile mark, he briefly took the lead from John, whom I’d last faced – and lost to (and didn’t care because he’s a youngster and a nice guy) at the Tri-Valley 15K. Not only did John repay the favor as we hit the third and biggest hill at mile three, but I piled it on, also eclipsing Brad and moving into second on the climb. This positional jockeying was kind of fun, but it didn’t last. Following that biggest climb came the biggest downhill screamer, and by the four-mile mark, cramping and uncomfortable, and feeling like it was a B-Race day, I just smiled and waved as Brad grunted by and I realized that yes, he qualified for the Old Farts Club, and I wouldn’t be taking the masters’ top prize. C’est la vie.

Given that, the final climb back into town, which I’d earlier mentally called a gimme’, was anything but, transformed into a fatigued slog. Being ninety-five-percent certain there was nobody within reach (though never entirely certain) it pretty much just didn’t matter. Between the heat, the hills, and the cramp, my time was nothing to write home about. So just wrap it up, call it a hard workout, a decent day, unremarkable, a B-Race. A fine day, to be sure, but a B-Day, with no regrets.

With an absurdly big trophy.

Tidbits of Note: Entering that killer hill at mile three, my odometer clicked over mile one thousand miles on the year. I’d known it would happen that day but had forgotten about it in the heat (pun intended) of the competition. It was an appropriate spot for the event. And post-race, I had the pleasure of bumping into a former co-worker I hadn’t seen in years. Truth be told, he spotted me. Jim played football when he attended my alma mater, Rensselaer, and I was tickled to see he’s keeping himself in fine shape during those years when most people focus on their careers and neglect their fitness. Way to go, Jim!

Posted by Gary Cattarin at 9:30 PM