We recall wistfully those college days when time blurred, especially time after about three in the morning when you were cramming for that final, taking bad pictures of the sunrise out your dorm window to document the experience, hoping to nail it 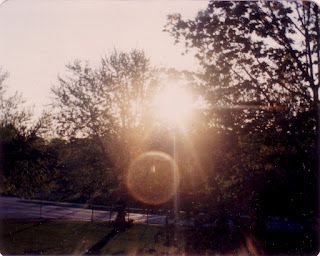 (yes, that is actually the Troy sunrise on the morning of my freshman physics final). Then the memories of reality flood back in, and you recall how utterly rotten you felt when you walked in the next morning, how the professor thought you looked so fried that he offered to let you defer, but you motored on anyway, and somehow, at least in the case of the exam following this photo, you nailed the sucker.

Thirty years later we know darn well that all-nighters have a dashing and heroic aura to them, even in the post-collegiate professional world (nothing like that email time-stamped four-twenty-three AM), but in reality they are to be avoided precisely because of how utterly rotten you feel the next morning, how you are in fact so fried that you should defer any meaningful activity not related to sleep. Yes, I still need to pull them occasionally in my line of work, but not by choice, and certainly they’re incompatible with race performance. Marathon prep consists of months of training, weeks of taper, days of rest, and critically, a good night’s sleep before the big event, the word critically indicating that it’s a real problem when that last step of the process fails.

Fortunately, rare is the case where I’m not out in ten minutes flat. And “race nerves” is not a term known to me; heck, it’s just a race. No, I’m generally losing focus long before the end of the chapter I’m trying to slog through. Attaining a semi-coma is just not a problem.

But it was on Saturday night in a suburb of Buffalo on my uncle’s couch. And I have no idea why. Perhaps they served double-caffeine cola at the pasta dinner that night. Perhaps the KGB drugged the air in uncle’s living room. But for whatever reason, it just didn’t happen. Lights out by ten-thirty for that four-thirty-oh-my-God-it’s-early jangle became midnight, became one, two, a haze. Turning and tossing and wondering if there’s a dog (you know, the old dyslexic agnostic insomniac thing), a few brief interludes of fading out, but probably no more than one, two hours total, and already in a semi-wakened fog when that dreaded alarm came. Oh, no, this is not good. It’s typical for me to be dazed when roused, but dazed and fried, wiped, already fatigued, with a starting gun in two and a half hours, no, this is not good.

Such began the first marathon I’ve ever run on an all-nighter. Having shuffled off to Buffalo once again, fourth time for this race, seventeenth marathon, seeking redemption and a fast time, perhaps the Personal Best I figured I’m trained for, after the Boston Bake Fest ruined the previous attempt, focusing my worries entirely on the Buffalo forecast which appeared to be headed into the too-warm zone as well, I never saw this one coming. No sleep? Seriously?

My warm-up only confirmed my worst fears. Ugh. Slug. Might as well, the grave be dug. It was just plain ugly. Bodily functions simply not cooperating on multiple planes (which would become another issue later, but I’ll spare that detail, suffice to say that I spent about fourteen miles wishing for a five minute stop I was unwilling to give myself…). I wasn’t even focused enough to line myself up right at the start, ending up a good five or six back rather than my desired second, maybe third row. Hey, at least the geeky headband thing – it worked in Boston, might as well make it a habit – made me identifiable in the crowd.

And it was work from the start. When I’m tired, I’m clunky. Klutzy. The legs don’t flow, the feet clop harder, nothing seems to work right. Now, the beautiful thing about running is that after a long night of too much work, a morning run will start horribly but improve somewhat. I won’t get past the fatigue, but I will loosen up and feel better despite the tiredness. That works in a five-miler. Not so much in a marathon.

The clunkyness was immediate, though it did fade, even to the point of hearing a few compliments from the crowd on my stride later in the race. But the fatigue was on me rapidly and never faded, only grew. This one was simply going to be a long stretch of determination. There was no avoiding it. There was no period of cruising comfort before the grind set in. It was already in. Well, if this was going to be hard work, so be it. I didn’t get to marathon number seventeen without being intimately familiar with tough days. Let the slog-fest begin. Motor on, and nail this sucker.

From there, I can focus on the good stuff. The weather held, overcast persisting all morning to hold the air to the mid-sixties, avoiding the late-morning heat-fade which brought down the entire field last year. I settled in to the six-thirties by mile three and stuck there through the halfway point, a little slower than planned, knowing I wasn’t banking enough time to have a serious shot at a personal best, but also knowing I was holding my own on an hour’s sleep. Splits started rising just past the half, which at first I attributed to a lapse of focus through the transition from the busy half-marathon crowd to the lonely world of the full course runners, but it occurred to me later that miles fourteen and fifteen are a tad uphill. The reason mattered not; in my pre-fatigued state there was little hope of holding PR-pace into the high miles. Each ten kilometer segment sagged a little more, but I sated myself with the satisfaction of continued steady progress, as even when a couple late miles slightly topped seven, the body complained but didn’t fail. And truth is, I picked off several others in the second half and succumbed to no one. Mental victory. 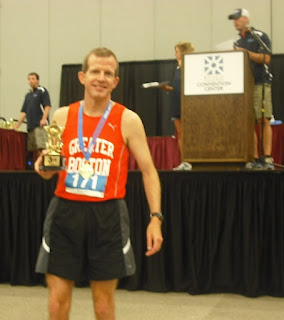 No personal best. No surprisingly high placing amidst the masters or age group. No race-career-defining moment. But at two-fifty-five and change, a solid sub-three and a mere minute and a half off my PR, on an hour of sleep, well, I’ll take it. Ironically, being a year older than when I set that PR last fall, on an age-graded basis, this one in fact equaled that one, on an hour of sleep. And since some serious masters talent showed up, only third in my age group (complete with a star-themed trophy we decided looks kind of like it came from a dance or cheerleading competition, but hey, no complaints), compared to second last year. On an hour of sleep. Yeah, I’ll take it.

I’ve no intention of running another marathon after an all-nighter. Those nights are made for blog posts.

Random Bits: Sunday’s Buffalo Marathon marked Day 375 of my streak, tying my record from age 17 in 1980, and Monday’s recovery run broke that longstanding mark. I’ll expound on that in the next post. And the research is in: running Boston in a Greater Boston jersey really IS special. In Buffalo, a surprising number of people shouted, “Go number one-seventy-one!” despite the unavoidably large “GREATER BOSTON” splayed across my chest. Sure, there were a few bits of Boston recognition, but their tone was more of curiosity, not home team pride like I heard in Boston.