Remember last week’s news fad? Linsanity! If you’re living under a rock, or have just chosen to vacation there for a while, it’s all about Jeremy Lin who managed to make people actually care that the NBA (you remember them, the basketball dudes?) still exists. Against this backdrop, I offer my own groaning pun. Yes, this past weekend it was… Vinsanity!

In truly American, impulsive, we can do whatever we want fashion, I ventured offshore on a lark-like moment’s notice to President Obama’s vacation spot of choice for the Martha’s Vineyard 20-Miler. To the Vineyard! For a twenty-mile race! On a spur-of-the-moment!

Now, there’s nothing really odd about jumping into a race on the spur of a moment. But somehow the need to take a boat to get there transforms it from a casual weekend jaunt into an Epic Journey. 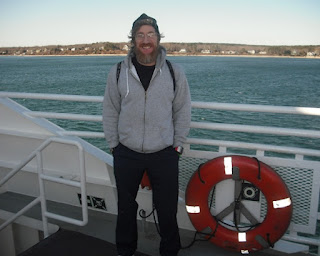 Yes, I know, it’s only a forty-minute ferry ride, and people do this every day of the week, but hey, for me, this was rather exciting. Echoing again that there’s nothing odd about jumping into a race, even for a long-distance guy like me, jumping into a twenty-miler on a day’s whimsical notice was clearly an outlier event. But that’s exactly what we did. On the Vineyard Rather insane. Result: Vinsanity!

And yes, I said we. After all, what are friends for? A good friend will prevent you from doing foolish things. A really good friend will join you for the fun. (Bueller?) So whereas I got the idea about a day ahead of time, I offered up this lark to Rocket John just a few hours before the registration deadline. With only ten minutes to spare before the four o-clock deadline, we signed up for the next morning’s race. Barely fourteen hours later, Rocket John, sporting what he likes to call his “winter growth”, found himself out to sea with me, sharing the boat not just with people in tights, but also, as a surprise side-event, a gaggle of mostly young and frequently lovely Brazilian ladies heading to a church conference on the island. Sporting tambourines and other 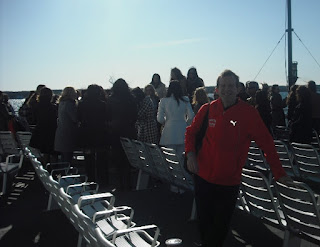 musical instruments of destruction, they didn’t wait for arrival to begin their revival, and we were treated to great rejoicing on the windy bow (behind me in the photo). But I digress…

Yes, Rocket John is a fine example of one of the reasons I love this sport: adventurous people willing to pursue healthy fun. And this race is a fine example of an amassing of that breed. While I appreciate the presence of anyone willing to come out for a local five kilometer slog rather than going to the mall or slugging a six-pack while zoning to some über- unimportant yet oddly nationally televised clash of non-titans like Bemidji State versus the University of Yuma, nothing can beat the crowd at an event like this. A twenty-miler. On an island. In February. You get the idea. It takes a special breed. These are the hard-cores, the die-hards, the people who could probably benefit from a good twelve-step program. I love these people.

To be fully honest about the level of our depravity however, I must admit that even this crowd thought we might have fallen overboard from the ferry. This was, after all, a twenty-miler, and most had planned for this one for quite a while, even if they insisted, as many did, that it was just a training run for Boston. We met plenty who planned this as a destination event, including a crowd from my old hometown in Upstate New York, easily revealed by their Wineglass shirts. So, let’s get this straight, you jumped into a twenty-miler yesterday? Why, that’s, uhh, Vinsanity!

It’s sort of worse than that, but at least I had a plan. After my stint of five races in twenty-three days had pretty thoroughly wiped me out, I’d backed off, swore off racing for a bit, and just piled up some miles. The effect was rather surprising. In the week leading to this lark I felt like flying, culminating in a nine-miler on Thursday at the quickest pace I’ve cut in a non-track workout in quite a while. Heck, I figured, feeling like that, I should race this weekend! And look what popped up on the web! Such it is that I found myself racing twenty, not just with no taper, but merely two days after that hard effort. So the plan was to hammer the Vineyard aggressively at a pace notably quicker than marathon PR, knowing that I could test it out without worrying about those pesky final six miles, and also knowing that if I could hold it without any preparatory rest, it had to be a good sign. And if I couldn’t, well, it’s always good to know.

Many location names in Massachusetts, including that name itself, derive from native American names. There’s a legend that Martha’s Vineyard is Abenaki for “Windy Place”. Yeah, OK, I just made that up, but I’ve made my point. For this race, that meant ten miles mostly downwind, then ten more, mostly back up. So after the first typically stupid fast six-flat mile, and a few more reasonably paced ones wandering through Oak Bluffs, past the hotel where my lovely soon-to-be-bride and I enjoyed a bike outing the last time I was on this island, could it be, twenty years ago?, when the field thinned I didn’t really care that I found myself alone by mile four, since the wind was prodding me along the ocean-side causeway bound for Edgartown.

It came as no surprise that that opinion changed on making the big turn about halfway in and heading east. Yes, I knew it would be windy. Yes, I wished I wasn’t alone at that point as sharing the load with a draft partner would have been so welcome. I could handle all that. What irked me was the big windmill, whump whump whumping out its kilowatts. Don’t get me wrong. This Prius driver loves those things. But it was such a reminder of how tough this lonely upwind stretch was. The course designer’s version of psychological warfare.

Still, by mile eleven I had over a hundred seconds in the bank to hit my six-and-a-half-minute goal pace – over eleven to burn every mile – and I only used up about five per over the next few miles. By seventeen I popped one in under goal pace, and entered the final two with over a minute to burn. But fate, she is unpredictable, and fate tried to trip me, sending an agonizing abdominal cramp a half-mile later. A brief walk, beat the bugger back a bit, soldier on, a very long and highly uncomfortable final mile, and though I’d toasted most of my cushion and fallen just out of the top ten, still eleven seconds to spare within my goal.

A couple of my Greater Boston teammates joined me to take a bunch of the men’s age groups as well as the women’s overall, four notches in the ‘W’ column being a nice added touch to the day. And while the ending wasn’t pretty, I’ll take an aggressive goal met on no preparation. Boston’s less than two months out. Hey, you never know, it could be a good sign. 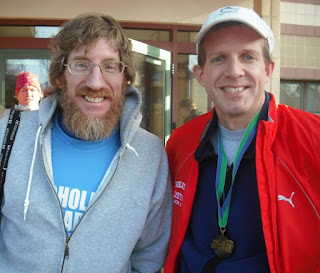