Another weekend, another sunny and beautiful yet windy February day on the Cape & Islands, and another notch in the win column. While these wins aren’t exactly world-class, I could still get used to this. And this one was on a return engagement, number three, our very own Three-Peat. Now, it’s not quite the award you get just for showing up, but admittedly it wasn’t far from it. Nevertheless, our team performance gave me a big grin.

If it’s late February, it must have been Hyannis Marathon, Half-Marathon, and Marathon Relay time, that weekend when the otherwise flat-lining winter economy of Cape Cod briefly comes alive thanks to five-thousand-plus tights-clad runners. If the locals weren’t so desperate for a dollar, or at least something to stave off the boredom, they might question the collective sanity of these people. For the most part, these aren’t the hard-core types I wrote of last week. The marathoners here are largely the statistical average. The winning times don’t tend to make the news. And most of them don’t insist it’s only a training run for Boston. Indeed, most of them – about eighty percent – don’t do the marathon at all, rather the half, which is the big draw. This is not the Type A crowd, yet they’re still out in force at a time when the weather is usually just plain lousy.

This year’s edition loomed a bit ominously since race organizers expanded the field significantly and had no problem filling the slots. I feared that what had been a crowded host hotel might become unbearable. My bad. I hadn’t noticed that they killed off the ten kilometer event, simplifying things, and the crowds weighed in pretty much at the same level as before. Fear averted. 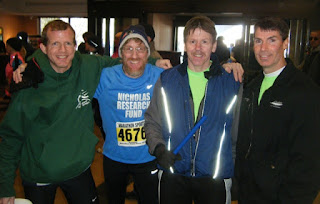 This year’s also loomed a bit ominously because that field expansion added over half again as many relay teams, adding to Our Fearful Leader’s angst over our ability to recapture our little bit ‘o glory. Three-quarters of our twice-champion masters team were returning, our newest addition Pat seemed promising, and I knew I was in good shape to improve on previous years’ performances, but with over forty additional teams, well, our team captain reveled in his worries no matter how much we tried to calm his jitters.

Bring on Alfred E. Newman. What, me worry? This was, after all, a fun event. Nothing more than our winter outing & bash for my local club (I have to be clear now that there’s two, so last weekend was a “Red” weekend, racing for Greater Boston, while this weekend was “Green”, racing for Highland City, life gets so confusing!). Captain Dan didn’t see it that way. To him, this was the big prize. To me? Well, if we win? Super! If we don’t? Whatever! It’s all good fun. In that agonizing runner way, of course, where pain equals fun.

Mr. Newman ruled the day. No worries. A walk off, more or less. Much to our surprise, last year’s count of merely five men’s masters teams shrunk to a paltry three. So winning that category wasn’t exactly a Red Badge of Courage. But the field did grow to one hundred and ten finishing teams, mostly in the open divisions – them thar young’uns – and while such a statistic wasn’t published, the truth is that four old guys from Marlborough and Hudson finished fourth amongst all the teams, and only two seconds out of third. Not bad for budding geezers. 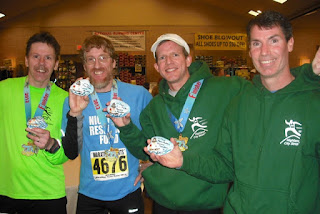 I can truly say I was proud of this team. Rocket John led off with a solid seven mile segment, cranking sub-six-thirties into the windy half of the course. Pat, who I nicknamed our “X Factor”, surprised all of us, mostly himself, dropping his expected low-sevens pace below six-forty. Wind at his back or not, that was a fine piece of running! Frankly, I wasn’t even really looking yet when he showed up with the tape-encrusted lead pipe they call a baton for this extravaganza. After my roll back into the wind (being a double-loop marathon course, the first and third legs are the same, as are the second and fourth), Dan brought home the victory, fast enough for us to slice – hello? – nearly seventeen minutes off last year’s winning time. Indeed, it was the first time my relay team ran the marathon faster than I’d covered the distance alone.

My leg was a different world compared to last year. By the time I set out last year, the course was littered with relay teams and full marathoners on their second lap. This year, with Pat stepping in for what had been our slowest leg, I was launched into loneliness. With the wind propelling my first two sub-six-minute miles, I passed two full marathoners and was passed by one young relay runner, who put fifty yards on me but never opened it beyond that. And that was it. Five more miles, mostly into the wind – and brutally into the wind for the final push down the beach road. Completely lonely, making it a tough mental battle to hold the pace, though I managed to equal my ten-kilometer personal best pace set out in Seattle, averaging not too far above flat sixes. That loneliness seemed like a good omen for a hoped-for win, but I’d failed to pay attention to which teams had come through the exchange before Pat’s arrival, so I just didn’t know, couldn’t back off, no slacking allowed. 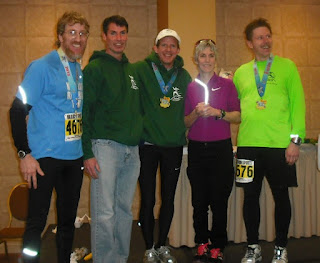 Like last year, after a quick recovery, Rocket John and I ran out the second half of the course for a training warm down, once again amusingly ignoring the cheers from fans and volunteers. It just wasn’t worth explaining. Besides, our true mission was to watch for Anchor Dan flagging, in which case we’d already decided to mug him, take the baton and timing chip, and dash for the finish. Gladly, we didn’t catch him.

The most important part of this event, once the win was secured, is undoubtedly the treasured hand-painted quahogs, among the cooler trophies on the New England circuit. This year I came armed, Sharpie ready to hand over to the event’s honored guest, Joan Benoit Samuelson, to christen our prizes. And then there were three… 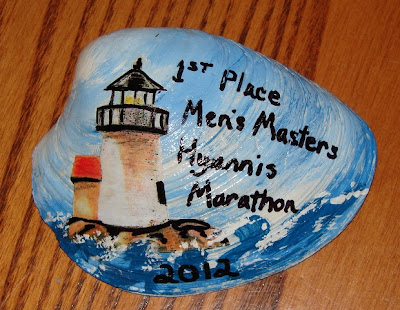 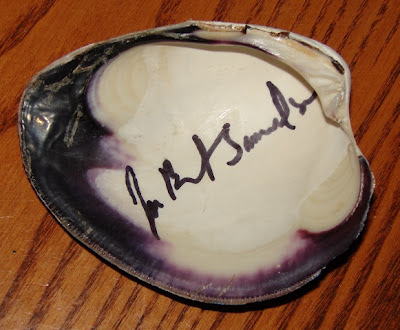 Posted by Gary Cattarin at 9:43 PM