What’s in a name? Or, what’s in a road? Or more precisely, what is a road? In pursuing my Run Marlborough 2011 quest, that’s the key question. It might seem obvious, but believe me, it not.

From a distance, the world is a smooth, pleasant, easy to define place. Just look at those clean lines of the roads of Marlborough. It should be easy to trace out the roads to be covered, right? 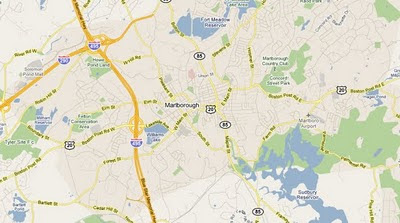 Silly you. Come closer. Everything starts to get fuzzy.

Take, for example, the snippet below. Circled in the upper right is Royal Crest Drive. It’s an apartment complex. But it’s got a street name. Is it a road? Is it a parking lot? Some parts look like roads. Some look like parking lots. It’s private, yes, but many roads in New England are private, never deeded to the city. For that matter, in other parts of the country, entire neighborhoods are private. But they’re still roads.

Or look at the circle in the upper left. Maplewood cemetery. Dead folk. Lined up. Accessed by roads. Small ones, to be sure, but roads. Or driveways? Who can tell? 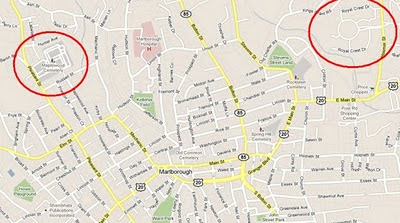 Now, kids, draw even closer, and look at the grainier underbelly of our world in the snapshot below. Within a half mile radius we can pick out a gaggle of Google geo giggles. The circle on the left? No road on the map. But guess what? There’s a road there. If your browser resolution allows it, check out the property lines on the Google map. You can see it if you look closely. And you can really see it – and run it – if you go there. But unless you live there, you won’t see it until you get there. Surprise!

The next circle to the right? Our beloved rail trail. Is it a road? Well, no. But is it one of the best running routes in the city? You bet.

And the next one to the right. Unnamed spur. Another famed cul-de-sac? A driveway? No, none of the above. It doesn’t exist. Who knew? And this isn’t even an obscure spot. The road it spurs off of (or doesn’t, as the case may be) is well travelled. I pass that way often, in car and on foot. Did I ever think to look for said spur? Not until recently, because I never looked closely at the map there before. You don’t tend to look for something that you didn’t know was supposed to be there because it’s not. (Disclaimer: Come spring, I might find things that don’t exist…).

And finally, the circle on the right, Hollis Street. Pretty obviously a street from looking at the map. Wrong again, friends, it’s absolutely a parking lot. Though I’ll probably run it anyway, if for no other reason than in honor of Dr. Foot Doctor, who’s offices it serves. 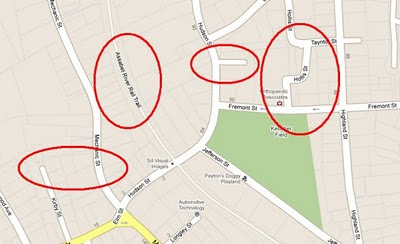 And we won’t even get into the industrial section that covers most of the western part of the city. The vagaries there defy classification.

Every part of the country has its geographical oddities, so it’s not like these questions are unique to New England. Bottom line is, I just have to make a call. I err on the side of running it if I can, but I reserve the right to eyeball it and choose to ignore it. I won’t claim every call is right. I’m still getting my tour, and I’m not seeking entry into the Guinness Book of World Records or even a column of Runners’ World, so who cares?

With that backdrop comes the story of So Busted.

Like the unnamed spur shown above, I’d identified a curious spur on the western end of town. Satellite photos showed two houses situated about a tenth of a mile down something that might be a road, or might simply be their driveway. A visual was in order, so I made a pass one day only to find the result inconclusive. Wooded, snowy, vague. No street sign, but no mailboxes at the end either. In short, impossible to determine.

When in doubt, if there’s no armed guard or gatehouse, go for it. It’s easy to apologize later. “Oops, wrong turn!” goes a long way. A quick shout of “Every street in Marlborough in 2011” wins instant smiles. Just run it, nobody will notice or care anyway. Right?

And so last Saturday on a winding trip to the gym, I turned down said snowy lane. Not a soul in sight, just the crunching of my shoes in the snow and my huffing steam breath to keep me company through the tree-lined way. And at the end…

Of course. One of the residents of one of the two houses was sitting in his idling car right where the lane split into two obvious driveways. I’d planned to turn around at that spot anyway, but hoped to do it anonymously. Busted. Wave, turn, and run. So much for anonymity. Well, nobody shouted at me. Or shot at me. I’m home free.

Thirty yards from the main road, oh come on, you’ve got to be kidding me. Someone turns into the lane. With the snow banks, it’s only a car wide, I can’t exactly hide. They slow to let me pass, I scurry by. I do the preemptive friendly wave, the woman waves back. I can’t make out the other person in the car, but something rings a bell, but then again, the cold air in the contact lenses makes things fuzzy sometimes, who can tell, and I’m not stopping to check. I’m so double busted, I’m outa’ there.

Finish the run at the gym, put in my upper body work (yeah, like after a month, I’m huge, right? Another big NOT). Dearest wife picks me up as planned. On the drive home I tell her my story of double busted and she laughs at my ignorance of the world. I know geography, she knows people.

Of course the woman in the car was familiar. Those weren’t just people we know. Those were people we know very well. That ring-a-bell woman was the mother of my greatest coaching success (mostly his talent and drive, not so much my coaching) and of course the other person in the car was, well, how dim could I be to have not caught on to that? And yes, that was their house. And no, I had no idea. Hey, it was out of context. Never saw that one coming.

On the flip side, she later related to me that it’s not unusual for people to wander down their driveway – yes, it is a driveway – precisely because it’s hard to tell it’s a driveway. As it was, she didn’t really give it a second thought that someone was running down it. As it was, she couldn’t tell who was under the winter togs, but somehow figured out that if that someone was crazy enough to be out running through the winter snow, it must have been Coach. That, to me, was a real tickler.

Busted indeed. But a little wiser to the fabric of my community, and armed with one more fun tale.
Posted by Gary Cattarin at 9:52 PM