An idea has been brewing in my head for a few months ago, and yesterday I launched it. It’s pretty simple, nothing Earth-shattering, unworthy of much note, but should provide for some interesting times. I’m calling it Run Marlborough 2011, my goal of running every street in my city this year.

We goal-driven Type A’s need something in our sights to egg us on. For the past few years I’ve set performance-based goals, and by and large I’ve done rather well by them, save for one which has frustratingly eluded. Ran the first marathon, check, ran enough of them to feel like a real marathoner, check, went sub-three, check, even had the fun of breaking the tape in a local race this past fall, check. More importantly, got in shape, check, lost weight, check, dropped the cholesterol meds significantly, check, regained a lifestyle missing since youth that’s just plain good for my head, check. By and large, it’s all good.

The one that’s eluded is purely esoteric: the two-thousand mile year. Since hitting nineteen hundred in 2007, which spurred me to aim for two grand, something’s gotten in the way each year to prevent cracking that psychological barrier: the snapped tendon in 2008, the time off after surgery in 2009, and this year’s parade of small yet annoying injuries, leaving me at a bit shy of sixteen hundred for the year. I could take another stab at it, but reality says it won’t happen this year, and worse, it’d be foolish to try. I’m still not whole. The leg is still hurting, even to the point that I might have to break down and pay a doctor to tell me what I pretty much already know. So another course is in order.

Thus was born the idea of quality, or at least variety, rather than quantity. Call it the poor-man’s fifty-state-marathon circuit. Face it: day in, day out, we all do it, we run the same roads over and over. Where I live, on the edge of a small city, I’ve got some really nice courses for those repeats, and I really don’t mind seeing them again and again. But it’s always interesting to see new places.

My adopted home of Marlborough, chosen courtesy of meeting my wife, a native, twenty years ago this year (and we still laugh at how on the night I met her I expressed my dislike of the place which I’ve now grown to love), is not a terribly small place. It’s a city of a bit under forty thousand which encompasses twenty-two square miles, but is twice as wide as it is long, making for a longer reach to the farthest extents. I’m lucky for this endeavor to live relatively close to the center, yet from my home, it’s 6.1 miles by road to the most distant road point, a fact that I hadn’t researched ahead of time, indeed hadn’t checked until a moment ago while writing this article. What I also haven’t researched is how many miles of roads my fair city holds. That’s right, I have no idea. Nary a clue. I suppose one of these days I should call up the fine folks at the DPW and ask, but I’m not sure I want to know. This is not about quantity. It’s an odyssey.

Of course, I have to impart some methodologies to define the challenge. No map is entirely accurate, but I’ve got to have some sort of standard. I spent a few minutes (OK, I admit, a few more than a few) assembling a montage of Google maps into a single bitmap covering the entire city with enough resolution to identify and mark every road. Much to my chagrin, it topped out at eighty six megabytes. Two days into the challenge, I’ve started to color in routes traversed: 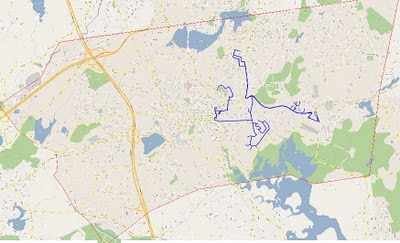 In a version reduced enough to post here, you can’t possibly see the detail, but you can get an idea of the plan from the first two day’s tracings. The red lines outline my city. Home base is the end of the blue line furthest north on this map.

If the road is on Google Maps, I’ll try to run it. If I get there and it’s not really there, c’est la vie. If I find something that’s not on the map, I’ll run it as well. Parking lots don’t count, but if the map shows a road into a parking lot, I’ll try to cover it. If it’s gated, well, I have no plans to get arrested. And I doubt I’ll get a police escort to do the Interstates. But hey, by the end of the year, you never know, right?

It’s also my intent that every run will either start or finish at home, preferably both, but since I joined a gym on the west side of town for that cross training I’ve so needed (and yes, my arms hurt right now, thank you), and since I intend to run to or from the gym when I can, I’ll allow the one-anchored variety. But driving to some far extent of the city and doing a small loop is right out.

This isn’t a publicity thing or a fund raiser, but if I inspire you to give money to some good cause, so be it. What I’d rather see is a few others taking up the challenge as well. Adventure loves company.

And so on that note the challenge started with a very pleasant bang. New Year’s Day was an unseasonable fifty eight degrees and I so wanted to run, but I also so wanted to join my lovely wife for a New Year’s kickoff stroll. As a compromise, I told her I’d walk the first mile and a half with her, then depart on my run while she finished up. As we approached the spot of my departure, as if on cue – I couldn’t have planned this if I’d tried – around the corner came Bill, my runner friend of Reach the Beach and New Hampshire Marathon fame. Perfect!

Bill and I wandered the city for an hour, and on Day One already covered roads I’d never seen. There’s nothing quite like the look on the face of a resident of a dead end as you run past them with obviously no place to go. Most non-runners just don’t get it when we run by, but a quick shout of, “I’m running every road in town this year!” on New Year’s Day simply lights up faces. As for Bill, I may have my first convert.

Right now that map looks very, very big. But I’ve got three hundred and sixty three days ahead of me, and plenty to see. Oughta’ be fun.
Posted by Gary Cattarin at 11:29 PM