There was a moment that defined it for me. Not the kind of moment you’d expect, but for me, it was the moment. Months of planning, many hours of sleep forever foregone, the entire club pulling together to pull off our biggest event of the year, and then there was this moment that made it all, well, unbelievably cool.

It wasn’t in the hour leading up to the race as I watched in disbelief as they kept coming and coming and coming until we’d more than doubled our field from last year. It wasn’t the thirty seconds of fame, or maybe shame, we’ll have to see, when they air that interview of Yours Truly, Race Director, on local cable access TV. It wasn’t even when I had the honor of shouting, “GO!” It was about 30 seconds later. After high-fiving the bogglingly large departing field. As they headed off down Jefferson Street. Right as they hit the rise at the south end of Jefferson Street.

An image flashed in my mind, the image of that spot about three-quarters of a mile into the Boston Marathon that I’ve written about most every year, that spot where you can see a good quarter-plus mile ahead as the road rises in front of you and you get a glimpse of the magnitude of the pack. A pack so large that even if you start up front, which I’ve had the honor to do, it still looks huge in front of you and you ponder momentarily how many tens of thousands are still behind you. Now, there’s no comparison between 27,000 at Boston and 214 at the Running With the Wolves, but just for an instant, as that pack, our pack, my pack, rose up that rise 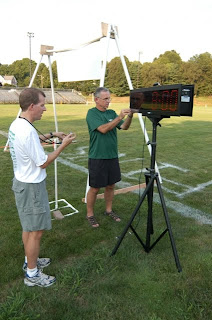 on Jefferson Street, just for an instant that image of Boston flashed, and in my mind I couldn’t help but say, “Wow!” (the actual word was a little coarser than that), “We’ve created a real race!”

And so launched the second annual Highland City Striders Running With the Wolves. Not that we didn’t create a race last year – indeed, technically, that one being the first annual, that is when we created the race. And not to say that last year’s event wasn’t simply thrilling to all of us in the club, being present at the creation. But this year if anything validated last year. Apparently someone said something to someone because the next thing you know, we were handing out bib number 227 (compared to a mere hundred last year) and coming perilously close to having to break into the spare set of numbers (fear not, behind the spare numbers we had yet another backup plan, a loaned roll of Tyvek lurking in the car ready to be made into instant numbers). Yes, the word got out, and they came. And came. And came.

And thrilled us all to the bone.

[A few of them might even be reading this, since they were all treated to a slip of paper with my blog address. Two or three new readers would again thrill me to the bone. Thanks for stopping by, visit often, comment please!]

All of the things that could go right, did. The weather worked - It didn’t rain, and it was hot, but not nearly as hot as forecast. Our fine City of Marlborough exceeded our expectations in every way. Their man didn’t just unlock the gates to our stadium for the finish, he dove in to his task like he was a club volunteer, seeking out ways to help. Cops showed up not just to help, but on bikes to ride, clear, and patrol our rail trail course for us, and save our back-sides when the one down-side incident of the day happened and we lost a runner to the heat. Thanks to them he was transported within minutes and is out there now, fully committed to never letting that happen to him again.

Every member of the club pulled their weight and then some, every member brought something extra to the party, both gear and additional hands. It was a night when if you were related to one of us, you probably chipped in, and not because anyone told you to, just because you did it. Friends of the club and total strangers jumped in to make it work. The list to thank is endless. The feeling was elation. We had a ball. 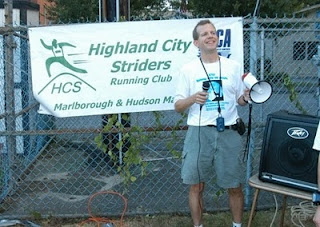 Not that it shows on my face at all.

And the best part is, it showed to our runners. Talking with them after the fact, while we slugged back beers and burgers at our favorite local point of human coagulation, the common theme was how great our people came through.

Now, I’m a big skeptic. One of my favorite quips of recent years came from an industry consultant in my business who, being reviewers of technology for a living, have had to live through hundreds if not thousands of mind-numbingly dull presentations by various firms trying to gain their favor. In a somewhat pithy response, they put out their own presentation a few years ago, providing tips to wannabe-looked-on-favorably companies. Don’t ever, they cautioned, put up that slide that says, “Our people make the difference!” Their point? Everyone says that, so unless you have some uber-genetic secret that truly makes your great people different than the last guy’s great people, well, we’ve heard it before. Yawn.

So I won’t tell you that our people were the best, the greatest, or from some super race. I will tell you they were really, really good, and they delivered with heart and passion like this was their biggest event of the year. Because it was. Because they’re all runners, and they’ve all been to races, and they know what works and what doesn’t. Which raises another topic, the rise of for-profit racing, which I have been meaning to opine on for some time. Save that for another day, and suffice to say that club racing is, in my view, the only way to fly. Running events by runners for runners and nobody else.

As race director, to those who made this event happen, I say thank you. Again as race director, to those who came to our race, I say thank you again. And as a hobbyist writer, to those who actually took a moment to check out the web site on that slip of paper (and in really small letters on the back of your new race shirt, so you can’t say you lost the paper), I say welcome, thank you for popping in, please feel free to comment, even sign on as a follower, and by all means come back soon. I post about once a week, sometimes more often, sometimes less, but always try to keep it entertaining and insightful enough to provide you some running reading pleasure.

More stories and photos from the Wolves race will follow…
Posted by Gary Cattarin at 11:30 PM