Stupid Fast: In my race story last week I talked about how stupid fast I went out. How stupid fast was it? Well, it was so stupid fast that I actually hit 30K faster – by 21 seconds – than I ran the whole 30K race at Stu’s back in March. 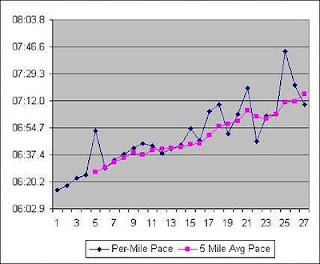 After that race I mentioned that I’d run the pace I wanted for a marathon, but knew there was seven and a half more miles to go. Guess what? I ran that pace, and had seven and a half miles to go. And they weren’t pretty. I hit the half in a smokin’ 1:26:06, only to follow that up with nearly an hour thirty three. Yep, no negative splits on this one, instead just an ugly pace chart, showing either a struggle to get my pace under control or a twenty-five mile fade – you be the judge. Not exactly a smart race strategy, but in the end, whatever.

Everybody’s Passing Me! The first corral is a scary place to start at Boston. My number just barely got me into that club, and I knew they’d go out fast, so I put myself in the back quarter of the corral. Nevertheless – and despite my stupid fast early miles – I couldn’t escape the feeling that I was being walloped by everyone around me. Not until late in the race did I feel like I was holding my ground. And pictures show all those two- and three-thousand numbered folks all around me. Yet, if you figure that there are a hundred or two up front in EliteLand, my number 1948 hinted at a seed of 1100-1200 or so, and my final place, 1170, fell right into line. Moral of the story? Don’t believe it when you think everyone is passing you.

Old Friends, New Friends: Boston has become an annual gathering of my ever-expanding clan of running friends. It’s like a class reunion, and the class keeps getting bigger. Shout-outs go to…
The Reward! The reward? A few post-race days of R & R on beautiful Cape Cod, gloriously devoid of summertime crowds, and sporting just enough fellow Boston recoverees to make for interesting conversation including the lady from Sacramento and the gent from Germany enjoying our Commonwealth’s gorgeous beaches. I’ll excuse the couple who, while soaking in the hot tub, asked the classic, “and how long is THAT marathon?” question. Muggles.

Barefoot beach walking is perfect therapy for marathon-battered feet, like a miles-long foot massage. And the flatness of the Cape Cod Rail Trail was perfect for those rehabilitation runs. No hills this week, thank you. Perfect time to jog a few with my beloved, who yes, on her own accord has taken up the cause and is putting in a few miles.

By week’s end the quads were back in business enough to somewhat foolishly pop in a ten-miler. A ten-miler four days later? Well, you know how it goes… Out onto the rail trail behind the hotel, I wanted to run into the next town to check it off my list like any nerdy engineer type would. Then, once there, it was only another mile and a half to the end of the trail, so, might as well… Suddenly, I’m five miles out and only one way to get back, so what’s a runner to do? Some speed, of course, culminated by chasing down a local runner who we’ll call Amy (since that was her name), and her version of the Wonder Dog (border collie), Echo. 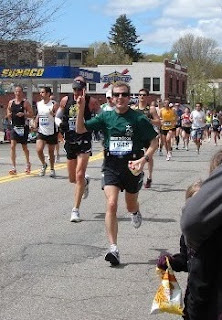 A little banter made the trip back more interesting, as did Echo’s joyful sauntering. Echo seemed a fine companion until he (she? It?) decided to flush a squirrel out of a tree, which promptly flew a foot in front of Amy’s face, giving her quite the start, and landed on the trail immediately in front of me, not at all right-side up and therefore doing one of those hysterical righting dances that only squirrels can do, while trying to run away, of course in the same direction I was moving, well, just try to envision it. Four days post Boston, muscles still a little tender, and it was either dance or kill the little bugger. Yeah, you had to be there, but trust me, it was a real hoot.

Parting Shot: My wife captured a classic shot as I came through Newton Lower Falls at mile sixteen. Really I was telling my ladies that I wanted one bottle of Rocket Fuel, yes one, see that finger, one! Clearly it looks like something else entirely. I’m not showing off. Just trust me on this one.