If you tried to package up everything that happens on Marathon Monday, you’d end up with something that UPS probably won’t ship in one piece. So now that I’ve dispensed with the excitement of the race itself in last week’s posting, let’s move on to some of the more interesting tidbits to emerge from that intimate little gathering in Hopkinton. Here’s Part 1 of two entries to this post.

It’s an Cozy Little Event, Really! With 27.000 registered runners, countless bandits, and hundreds of thousands of fans (estimated at over a half-million), how will we ever find each other? Yet somehow we do, and it keeps happening enough to convince us it’s karma. Dude, let me count the ways.

One: Rocket John and I drove together to Hopkinton State Park and boarded one of many BAA buses to downtown Hopkinton. Granted, this arrival route serves many local runners, but it also carries many out-of-towners who are staying in the western ‘burbs – probably a couple thousand in total. So it’s still pretty remarkable when the two ladies sitting behind us are from the next town over, and even better when one says, “Hey, I saw your picture in the paper!” Even better because, frankly, very few actually read that paper.

Two: Walking into the Athlete’s Village, tens of thousands of runners, you couldn’t find someone if you tried, and of course we almost walk into our friends from the Squannacook River Runners, including Chris, who provided the impetus for my writing this blog in the first place. Even better, having first seen Mark, clueless me didn’t even recognize Chris behind his funky hat and shades. Hey, it was a whole week since I ran with the guy, cut me a break. They made fine camp-mates at the village as we basked in rare golden sun for a change rather than the usual Hopkinton Shivers. 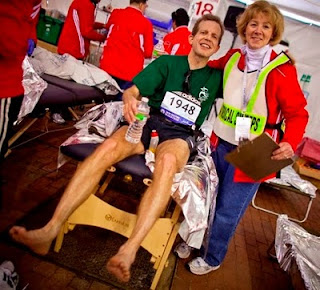 Crossing the finish line, I had a social call to make. Michelle, the lady who directs the vaunted medical tent is a friend from my church and insisted I stop in to say hello. Conveniently, I had a wicked blister on the ball of my left foot that had been working up since mile fifteen, and miraculously hadn’t burst, but wasn’t at all comfortable, so getting a patch was a great excuse to stop in and say hello. Now, just having a friend at the end was nice enough, but – yes, that phrase again – even better, when I walked out of the tent ten minutes later, there was Rocket John walking by, fresh over the finish line (probably not the best choice of words to describe him at that moment, but you get it). Had I not stopped short I would have walked right into him. Out of 27,000, just like that. I swear you can’t choreograph this stuff. (Thanks to med tent photographer Justin Ide for the shots of me, Michelle, and that fine inch-and-a-half blister!) 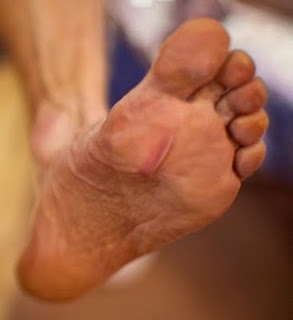 Four: Hours after my finish, after the baggage bus, after the reunion with Rocket John’s family, after hitting the Squannacook post-race party, after a fabulous rub-down, after all this I am walking back to catch the BAA bus back to Hopkinton, and amidst the still swirling crowds I hear my name called not once, not twice, but three times in a half-block span. First by a co-worker out to watch the race (my bad, I didn’t recognize him, we’re relatively new colleagues), second by someone I’ve never met but knew me well enough through someone else to recognize me (a bit scary, really), and third by a club-mate. Hundreds of thousands of people, and you can’t blend into the crowd.

Five and More: And there were other such encounters, edited for brevity, not to mention the numerous shouts from the crowd during the race I already mentioned last week. It’s intimate and cozy, I tell you. And somehow, there’s always someone around that you know.

I’ve Got His DNA Right Here! I completely missed the opportunity last year. Being in the first corral, I had wormed my way to the front to see the elite men, but they weren’t out yet, and knowing I’d be slow, I didn’t want to get caught up front when the rush went off, so I faded to the back of the corral and never saw those vaunted heroes.

What I didn’t realize last year is that there is a fenced corridor along the north side of the corral which the elites use to come from their secret church basement lair to the front of the pack. All you have to do is sidle over to the left, and you not only get to see them all, there’s a lot of high-fiving going on as well. I started the race with a little Ryan Hall, a little Meb, and a lot of Kenyan and Ethiopian DNA smeared across my right hand. I’d tell you I haven’t washed it since, but that would be a lie. Perhaps some of it might have soaked in and melded with mine? 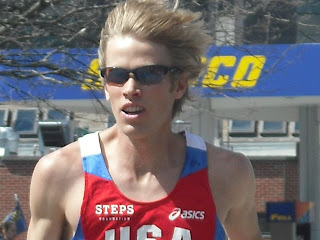 I’ll have to let my hair grow and see what happens.

And on that topic of the legendary Ryan Hall hair, my daughter, standing at mile sixteen, got one of those one-in-a-thousand lucky shots as Mr. Hall of the Hair flew by. Check out her picture – this is unedited, uncropped, uncompromised in any way. Way to go, Emily!

Media Star? Notwithstanding the obscure pre-race newspaper photo publication referenced via the link above, it was a banner year for media face time. Usually I time it just wrong. They’re always talking to someone at the times I pass the TV cameras, or if I make the shot, it’s during a commercial when they’ve picture-in-pictured the coverage to a miniscule size. Not this year. My timing was perfect: a full shot climbing Heartbreak, a long shot laboring up Hereford Street, and a final shot coming down Boylston, ironically ending with me checking my watch only three blocks from the finish but still not convinced I’d make it in three hours. If I was truly in the high-tech media age I’d have screen shots, but I’m not, so I don’t. Come on over and I’ll pop in the real live antique VHS tape!

The Honor of Addressing the Troops: I’d mentioned that the head of the medical tent is a friend. I was honored that she broadcast my kind words to her staff out to all of them. They’re saints, they deserve to know it, and I’m oh-so-pleased to have had the opportunity to tell them so.

To be continued…
Posted by Gary Cattarin at 11:12 PM