In Honor of Floppy Bob

Pity poor Bob. Bob is the skeleton in my daughter’s 5th grade class. He’s got great bone structure, but alas, he’s a complete quadriplegic as he has no tendons. He just hangs around all day, listless, clearly depressed, and reminiscent of the residents of Gary Larson’s famous boneless chicken ranch, though with a different affliction. But today I had the opportunity to honor Bob’s role in my daughter’s education and use my recent experiences to pay one forward.

News of my surgical adventure not surprisingly reached my daughter’s teacher, who thought a little first-hand experience would liven up her class’s study of the skeletal system. And so I gleefully put aside my usual breadwinning slideware of networking technology and became, for a half hour, 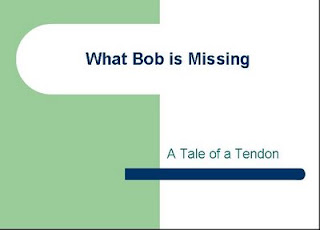 I’m used to speaking to CIOs, network directors, and other techno-types. I’m used to the usual range of adult responses, the in-your-camp types, the antagonists, the close-minded techno-bigots, and yes, even with my constant stream of bad puns and gags, the snoozers. Fifth graders present a whole different challenge. It’s a challenge to figure out what they do and don’t know at that age, and hit their level. But they’re a great audience, they show their satisfaction and glee like no adult crowd, and they’re a lot of fun.

To bring the topic home to them, I started off from their classroom companion whom they know and love, and entitled my talk, “What Bob is Missing, A Tale of a Tendon”. And since Bob has no tendons, I brought Bob’s long lost cousin, a skeletal foot kindly lent to me by none other than Dr. Foot Doctor (actually, his partner Dr. Partner Foot Doctor, are these guys great or what?) on which I’d rigged up a tendon system with strings and rubber bands. Dr. Partner’s foot was a big hit as he waved his toe to the class on command (with a little tug on the string). 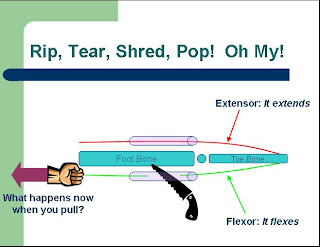 Now granted, I’m known in professional circles for being on the goofy side even when speaking on dry technology topics. I figure if they’re not asleep, you’ve got a better chance they might actually hear what you say. But still, waving the toe at the audience? You just can’t have this kind of fun in a briefing on voice over IP technology. No way.

Then, of course, it was on to the meat of the lecture. The human meat. Mrs. Teacher insisted that I tell my whole story, yes, including the juicy bits from the operating table. The coincidence that O.R. nurse who took those infamous pictures was the mom of one of the students in her class was simply too much to resist. Nevertheless, I expected that not every 5th-grader would agree this was cool, and gave a huge SQUEAMISH ALERT to avert eyes.

The boys, as a rule, loved it, and I’d like to think 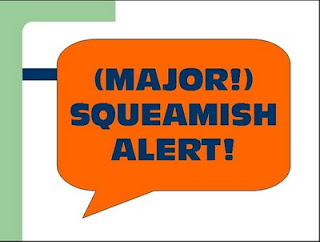 that at least one was inspired to pursue medical school a decade down the road. The girls were a mixed bag, with a few taking my hint to look away. Fair enough, I expected that. Mrs. Teacher was tickled, not least by some of my bad puns that could only be appreciated by someone over 40, and even suggested I come back next year – even when she’s no longer my daughter’s teacher.

As for me, well, what a grand opportunity to turn misfortune into a fun learning experience and pay one forward to the next generation. And what fun, to boot, even if there was no technology salesman buying all of us lunch afterward.

(Oh, and did I mention, yes, I ran again today, a bit farther, a bit faster, plenty winded, legs like jelly, it was rough, it was grand…ahhhhh.)
Posted by Gary Cattarin at 11:09 PM