A Foot of Spring

It’s March, it’s Spring (see The 60-Day Challenge). To prove it, a foot of fresh white Spring fell today. I told my physical therapist that when that foot of Spring melts off the local track, I want to be running on it. Meanwhile, we had a grand time at the Bev & Ed Whitney Memorial 5K on Saturday. 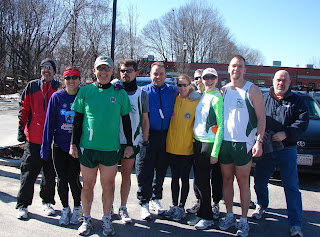 I don’t really know who Bev & Ed Whitney were, other than that they were the recipient of the North Medford Club’s Fred Brown Cup in 1993, which tells me that they were truly dedicated to the sport of running. Twice a year the NMC shows up in Hudson MA to host a race in their honor. It’s a small event, about 30-40 in the winter and perhaps 60 in the summer, but it’s at one of our favorite local watering holes, so who can resist? And being as it is right smack in the heart of our hometown Highland City Striders territory, it’s our noble duty to show up in force to support their race. And we do. 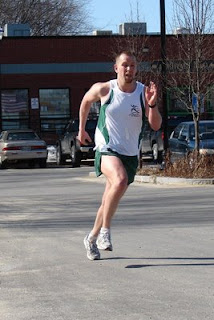 My Striders turned out in force, fielding 10 of the 36 runners, including 4th-place finisher Greg (photo) who elected to damn the torpedoes and fly in summer duds on a cold, blustery February day. I suspect he ran fast just to get back to his warm clothes.

I had looked forward to the Whitney for weeks, intending that it would be my symbolic return to the world of the living runners. But alas, my PT, Lady Healer, mandated otherwise. So I relegated myself to the role of Unofficial Official Photographer, and sobbed silently and invisibly as the race was won in a time over a minute slower than what I’ve done on the course. Not that I would have run anywhere near that speed had I run, in my current shape, nor that had I been in shape for speed, would the race have fallen that way, since I know the winner has also smoked the course a lot faster. Still, one can lament.

Another half-dozen Striders arrived to liven up the after-race festivities. I can’t say enough for this crowd. They’ve kept my spirits up through the 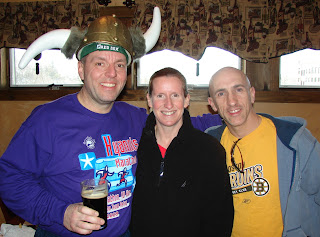 long desert of my injury, and they’re pretty good runners, too. Heck, for the second straight year they took the Clydesdale Relay crown at the Hyannis Marathon. Of course, for the second straight year they were the only Clydesdale Relay team at the Hyannis Marathon. But I love ‘em just the same. Thanks, ladies and gents, for the moral support this winter. I’ll be back on the roads with you soon.

As soon as Lady Healer works a little more magic, that is. She’s the master (mistress?) of deep massage, and can loosen my joints till they pop. Good pain, I tell you. Today she pulled out the big guns and hit me with the laser and the electro-shock. Yes, I know, the possibilities for jokes are endless. No, she didn’t attach the electrodes to my head.

So no running yet, but hey, at least I got some cardio out there shoveling that Spring off my driveway today.
Posted by Gary Cattarin at 11:00 PM