Hard corners feel good. Take that exit ramp a few MPH faster than the recommended speed and feel the rubber bite (even on my rusty old rice-burner). Yeah… Make that final course turn in a hot sprint and put the finish line in sight. Sweet… And of course, roller coasters. Yes, hard corners feel good. And I took one this weekend. Very sweet, indeed.

Again, my body surprised me in what it can do and how it does it. Saturday morning, it was different. Just like that. Suddenly, my foot felt strong. Not like totally healed, but for the first time since The Big Slice five weeks ago, strong. And it hadn’t felt that way Friday night. Clearly, I turned a corner. And it was hard getting there. Call it a hard corner. And yes, it felt good.

I’ve been back in the leg armor, a.k.a. the air cast, for two weeks. Dr. Foot Doctor’s orders were to put progressively more weight on my beloved foot, starting at about 20%, and leading up to about 80%. OK, now, is that 20%

of one leg’s worth, or two? And how does one measure said percentages? I made my best guestimate and went at it. And generally, it hurt. The air cast hurt. My toe hurt. The suture hurt. And it wasn’t pretty, either. A month later, still oozing (yum!). Since I’ve already shocked you with pictures of the surgery, pictures at this point are tame, so why not include them? It looked ugly enough to spur an email to Dr. Foot Doctor.

Side note: I love this guy. If your doctor doesn’t reply to email, find a new one. Many doctors don’t, and I can understand why, knowing the percentage of my day that is sucked up in reading, answering, and discarding the incoming barrage. But there’s nothing better to clarify instructions than to get them in writing, and there’s no easier way to get your doctor’s instructions in writing than with a quick email, written when it works for his schedule.

And so Dr. Foot Doctor replied with a very detailed email assuring me that no, it didn’t look infected, and no, those sharp pains weren’t a bad omen, just a sign that my body wasn’t thrilled with having stitches inside me (which a friend later confirmed, she having had the same thing a ways back), and most importantly, 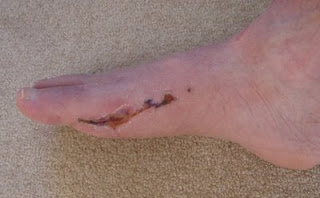 that things looked good because my toe wasn’t starting to stick up! Of course, since it was still taped, I didn’t really believe that, but I’ve since removed the tape and – whaddaya’ know? – still no Viagra toe! And while I’m still under orders not to curl my toes, I can definitely feel movement. Hey, this might actually work!

But, he cautioned, stay on the crutches till our next little get-together. And I wasn’t questioning that at the time. Until Saturday came, and I screeched around that corner. Woke up. Felt strong. Found that while I’m still supposed to use the crutches, (and by and large still do, doctor’s orders, after all), I really don’t need them for the first time in five weeks. Later that day I found myself downtown and felt like sprinting (on crutches and in the air cast, of course) down the street. Sunday I found myself standing up while playing in the church band, for the first time since November. It still hurts, and it’s still swollen, but less so. And it feels like a foot again.

The amazing thing is, it all seems so sudden. One day I really couldn’t. The next day I could. I feel like I’m around the corner. The home stretch is in sight. It’s still a long way off, but it’s in sight. Way cool. 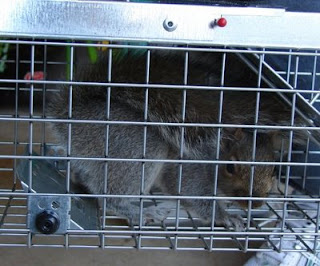 Cute and Amusing Postscript: Life has continued to throw curve balls at me while debilitated. I think there’s a law against this, but nobody’s enforcing it. As if a massive historical-scale ice-storm coupled and a day-and-a-half power outage a mere week after surgery wasn’t enough, Mother Nature sent me a friend last week who took up residence in the ceiling over my office. I’d really rather deal with these things when mobile! Building a barricade to keep him out of the rest of the house, and subsequently climbing over it to reach the outside was not pretty while confined to leg armor and crutches. But I’m happy to say we captured little Theodore (so named by my daughter) and he is now living happily at one of my club’s favorite off-road running spots, a couple of towns away, safely distant from any memories of that warm dry spot over the furnace. Every time I run there, I promise I’ll look for you, buddy!
Posted by Gary Cattarin at 2:00 AM