It’s easy to be down right now. I’m not running. Indeed, I’m still on crutches. I still don’t know if my toe will work again. The economy is in the dumps. My own employer is teetering on quarter-a-share stock (down from, uh, you don’t want to know…). It’s ugly everywhere. But it’s time to celebrate, and not just because W is history and I don’t have a sub-prime mortgage.

In a couple of days I’ll celebrate a month since the Big Slice. Celebrate seems an odd word, but every day brings me closer to normalcy. You have to celebrate all that’s good in life, even the little bits among the bad, like one fewer day on crutches. But despite the horror show of my face-crushing, nose-cracking, tooth-bending, tendon-ripping, with a surgically induced cherry on top fourth quarter of 2008, this has really been an incredible year.

Sure, I’m still tethered to my aluminum props, but I’m making progress, out of the bandages and splint, back in the leg armor of the air cast, and putting a little more weight on my foot every day. Sure, I’m now getting ugly sharp intense sudden grimacing maddening pains from that four-inch suture, now that it’s getting stressed with some weight, but hey, it’s new and different pain, so I must be closer every day. (Yes, the logic is twisted: hit me on the head with a hammer, we must be getting closer. Hey, work with me on this.) Sure, my foot is still swollen and ugly (of course, you see, it was truly beautiful before, unlike your feet), but at least now I can unwrap it, appreciate the ugly, and shower.

I’m not denying reality. I can’t deny that I’m feeling psychologically tortured because I still don’t know if this little repair job will do any good. My aching wish to curl my toes – just to see what happens – is up there on the scale of desire alongside nicotine fit and heroin withdrawal. Adding to the torture is the memory of a misstep on Christmas day, landing on – yes – THAT foot, not really hard, but hard enough to worry. I’d like to know I’ll be celebrating the return of Mr. Big Toe in all his glory, but I don’t, so I 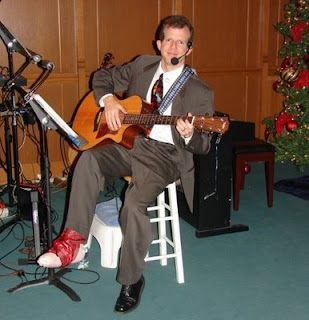 celebrate the fact that I’ll run with or without him. In the latter case, running will be harder, but after all, I did run my second-best marathon without him, so running won’t be impossible. I’ll just have to learn not to fall down. 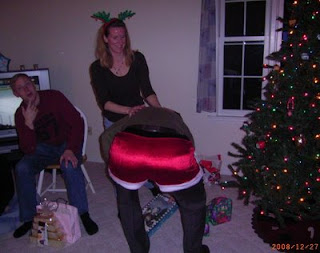 the digital variant thereof, available on request – what exactly was Jim doing in those Santa running shorts?). Joy goes both ways, religious and secular.

OK, so my foot hurts, get over it. Celebrate that it’s been a tremendous year running. At this time last year I was coming off the shock of turning in a 3:03 at the Baystate Marathon in the fall of 2007. In my dreams I wondered if I could break three hours by the end of the year. I never imagined it would happen a mere 4 months later at Boston. I couldn’t conceive that it would happen twice more before the year was out, and that I’d be sitting on a pair of 2:54s from Buffalo and Wineglass. Sub-three only three years after starting to run again? Celebrate? The word barely scratches the surface.

And celebrate the fun of getting there. The mystic odysseys of eight 20-plus-milers in prep for the big races, running joy that lingers as a state of mind. The shorter races, where 2008 brought me PRs at 5K and 5 & 10 miles. The tremendous camaraderie of my Highland City Striders club-mates, the fun runs, the track workouts, the relays, the bagels, the beers. The opportunity to serve them by helping to bring our club into legal existence. The fun of being interviewed by Chris Russell for his podcast, and the shocking honor of even being listed on the same web page as some of the legends he’s interviewed. And, at his suggestion, the fun of starting this blog

That’s a tiny bit of what’s been my year. 2009 will be very different. Easing back after this surgery, I might do some really strange things. Like run a marathon slowly. Stop in the middle and kiss my wife. Smell the roses, pick the daisies, that kind of stuff. Not set mileage goals. Not push for PRs. At least for a while, until it’s the right thing to do again. Celebrate the difference. Celebrate the adventure.

Now stop complaining, find a glass that’s half full, and celebrate.
Posted by Gary Cattarin at 12:57 AM