There are races that you target, key races that mean something in the great scheme of a life of running. Then there are races that you jump into in the hopes of lifting your established team, your clan so to speak, to some level of perceived greatness, like the Grand Prix series. And there are races that are simply local fluff or fun. But every now and then come the days when you’re really just a hired gun. Not that you’re really hired, of course; real money doesn’t change hands, but hired in the sense that you’re brought in to do your job, to load the dice. I guess I’m quick enough – not in any big pond, mind you, but perhaps in some small to moderate sized ponds – that I get that call now and then. Jump on our team, we need you, we need to kick someone’s butt. Yup, just call me One-Eight-Hundred Runner.

Thus it was I found myself riding to the unlikely destination of Canton, Massachusetts, to run on a team supporting the Pappas Rehab Hospital for Children in an event to support the same institution. All I knew about this team was that it had apparently been snubbed the previous year by, of all people – horror! – the caterers! While this event was certainly a fundraiser for the hospital, it wasn’t a fundraiser in the as in hit up your friends, but rather a fundraiser as in big supporters anteing up the sponsorships because little supporters – like us – will show up and because it’s a great thing to do. For me it was simply a chance to jump into a grudge match and help settle a score. My clubmate and his friend who works for the hospital – a fine institution recently renamed in honor of Arthur Pappas, most popularly known as the Red Sox’ doctor but in truth someone who accomplished oh so much more – needed to be sure they didn’t get beat up by a bunch of burgermeisters again.

Those burgermeisters, by the way, deserve great kudos, even if they were our targets for the day, as they were one of those big supporters. Foley’s Backstreet Grille in Stoughton annually dedicates their support to this kids’ haven to the extent that they close their restaurant for the day to send their staff to support the race. That’s pretty much unheard of in the restaurant biz. On top of that, every category winner walked away with a gift certificate from their fine establishment. You can be jaded and say that’s just a way to drum up business, but in total, it was a lotta’ dough, or wings, skins, burgers, or whatever.

Whatever, indeed, because for the moment, they were to be vanquished. And I was brought in to help with the cause.

One of the aspects of being a true mercenary is that you don’t really know the rules and you don’t really care; you just do your job. Admittedly, once I learned about the hospital, I did indeed care, but I never did learn the rules; we just did our job, we being myself and a few others from my local club. We vanquished those chefs. But we didn’t know then and I still don’t know now how the scoring was done, nor do I know whether I made a difference in that score. That’s when we pull out that word again, whatever, because, well, yea, there were burgers, dogs, and beers to be had ex-post-race-oh. Mission accomplished, good enough for me.

Our recruiter Paul led us to believe that nobody competitive showed up and that it was an easy, flat course. After all, said he, look at last year’s winning time! Mercenary Matt and I loosely pondered the idea of a one-two walk-off; and though he politely avoided anything remotely approaching trash talk, I knew clearly who’d be the one and who’d be the two in that scenario (hint: I’m old, he’s not).

Never believe the marketing. It wasn’t flat. Not brutal, but not flat, either. And it was a tad long, which explained at least a bit of last year’s winning time. While the course was certified, a certified course is only guaranteed not to be short. It can be a bit long (or sometimes crazy long, recall the nine-point-four mile Boston Tune-Up 15K). On top of that, the marshals sent us off course – avoiding a cut-through on the certification map – within the first tenth of a mile. Ah, the joys of small races. Courses aren’t perfect, mileposts aren’t either (by their postings, my second mile clocked in under four minutes, um…), and even the flag got stuck when the veteran color guard tried to hoist Old Glory pre-race. Again, whatever. As Belichick would say, do your job.

It was obvious by the time we’d circumambulated the hospital grounds that a few real players had, as we’d suspected while reconnoitering the pre-race gaggle, shown up. One-two certainly wasn’t in the cards. Heck, coming up on the mile mark I had a dog – yes, a dog – breathing down my back side. Between the idea that a dog might overtake me (dog owners, don’t be insulted, I know they can be fast) and the adjoining idea that his owner could be on my tail while repeatedly shouting, “Heel!” while I was gasping for enough oxygen to hold the pace, well, it wasn’t comforting.

Fido faded, I took out a few folks on the first significant rise and shortly thereafter, and spent the rest of the brief adventure (five-k’s are just too short and too fast for my liking) staring at Mercenary Matt from thirty seconds back. No chance of catching him, nobody threatening from behind, just grind it out. 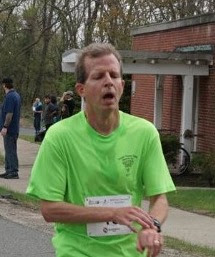 About this time I recalled that my fellow mercenary and I had made a pact a couple weeks back to join motivational forces over the summer and hammer out enough track work to shave our respective five-k times down. About this time I realized that the target time I’d agreed to was more than a bit unreasonable. About this time it occurred to me that on an age-graded basis, I’d have to run the race of my life by summer’s end to pull it off. But at this moment, I decided I’d be happy just being within a minute of that irrational goal, so even with no threat, I swung what little hammer I had and came across the line looking so God-awful, as the finish line picture would reveal, that I made a mental note to try and smile at next week’s race (spoiler: I did, sort of, but that’s the next story). 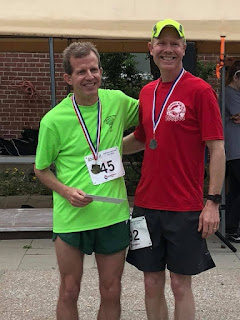 That imagined one-two walk-off became a four-five placing as we were roundly thrashed by those fast guys who weren’t supposed to come to this race. But still, fifth out of a few hundred, even if a bunch of them were just there for a walk, well, it’s respectable for an aged goat (and yes, I took what I’ve come to call the Somewhat Fossilized Division). And that idea of being within a minute of my miniature Impossible Dream even sort of materialized, if you took the long course into consideration. But considering that my age-grade rating on this one bordered on what I think of as my ‘gold standard’, the thought of knocking off a whole minute from a short race by summer’s end... Well, let’s not think too hard about that for the moment.

Burgers, beers, and the accumulation of enough awards among our carpetbagging crew made for a fine outing, and forced us to start planning a return trip to the area just to eat our winnings (after a run, of course). It even allowed me to forgive Paul for his sins of marketing, since he too walked off with a certificate to add to our edible prize pot. And there will be next year, since I suspect the caterers will be seeking their revenge. 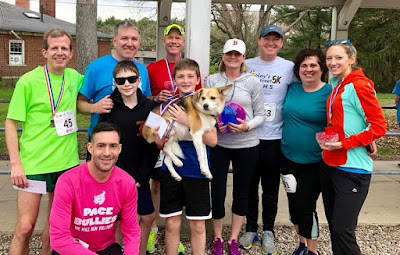 Happy Mercenaries
Meanwhile… Boston Follow-Up: Check out this seriously excellent video on the Boston Monsoon Monday Marathon experience from my buddy Chris Russell’s friend Eric (Eric made the video, Chris narrates and stars, so to speak). It’s fifteen minutes of your life well spent. Enjoy it here.
Posted by Gary Cattarin at 10:15 PM