Stu’s is a Rite of Spring?


Mother Nature is cackling uncontrollably. That is, of course, when she is not weeping.

A current theory – just a theory at this point to my understanding, though one that makes good sense to my fairly scientific mind – is that the rapid melting of the north polar ice cap and the significant warming of the Arctic (which is much more significant than changes at the mid-latitudes) is contributing to increasing instabilities in the temperature differential that maintains the location and flow of the jet stream. This weakening of the control mechanism results in wild fluctuations of the stream, leading to extreme weather patterns including the now-famed Polar Vortex and its cousin, our ten-day deep freeze around the turn of the year (remember the one-degree Groton Marathon?), and yes, these late season whopper storms.

So yes, as you read in our last episode, I declared Spring! a couple weeks ago. And yes, I (more accurately we, Dearest Spouse is an awesome teammate) shoveled two feet of white-tinged Spring! this week. And yes, this was the third whopper in twelve Spring! days, the first landing my neighbor’s spruce in my side yard, the second so heavy and wet that had I not gone out at midnight with a twelve-foot aluminum pole (in a lightning storm, mind you) to knock down snow, half our trees would now be nude (and in that one, an hour later, the lights went out on Broadway, allowing us to finally test that generator we bought years ago), and the third storm? Yeah, two feet, at least. And we had it easy. Oh, those poor blokes on the sea-level-rising coast…oh my. Spring! 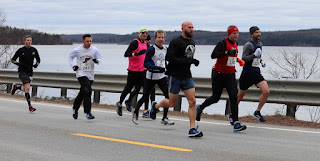 Somehow, the seas parted in the middle of all of this, and a gaggle of brave souls embarked on the famed lap of the Wachusett Reservoir known as Stu’s 30K. Eighteen-point-six miles of pure joy, interrupted by what one might euphemistically describe as a smattering of hills. That is, if one were as utterly blind to reality as…well, I won’t go political here. 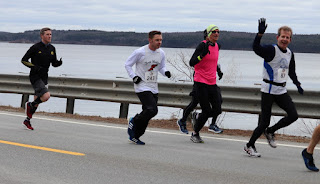 Stu’s is basically an Old Home Day, tough enough to only draw out the die-hards, not fashionable enough to generate the hordes of a marathon, and strategically placed to serve as an ideal training race for Boston and, as a bonus, usually catch the crappiest of weather – a distinction it shares with Hyannis and New Bedford (which is forecast to kick off tomorrow after a thirteen-degree overnight low). Three hundred and nineteen people finished, plus the (fairly small) relay, plus those unfortunates who didn’t reach the end, so let’s call it four hundred, and it seemed like a solid two hundred of them were Best Buds. Look at it as a grand reunion and the outcome almost doesn’t matter. But the outcome was positive.

Karma strikes conveniently. Trundling toward the start, a fair amble from the warm confines of the host school, Old Home Day produced a chance encounter with youngster who recalled that we’d passed more than a few miles together two springs ago at the Sugarloaf marathon. And wouldn’t you know, he had that same arbitrary number planted in his mind. Uncertainty loves company. Moral support. Or a shared journey into hell, if our arbitrary number turned out to be absurd. We quickly sealed a mutual support pact and I unleashed my usual stream of gallows humor while we huddled from the wind on the line awaiting the signal.

Stu’s first mile is flat as a board – probably the only mile in the race anywhere close to level (save a brief stretch along the lake at mile eight) – so early Irrational exuberance was almost a given. Our starting pace made a mockery of our plan; the God of Adrenalin can easily put a half minute in the bank early on, but sanity set in a mile later, and that arbitrary pace seemed achievable even as we worked the first big climb. My partner in crime drifted ahead; I let him go. I’d reel him back in around eleven when I was feeling surprisingly strong and his fortunes were flagging somewhat. 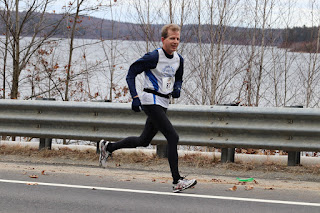 And that really is the tale of this tape. Cutting to the car crash, since locals and long-time sufferers of these diatribes all know about this one – plenty of hills going up, downhills that are steeper and shorter than you’d like and therefore don’t give you nearly the payback you’d like for the work you put in up front, and of course, the Dam Hills at the end, screaming down alongside the Wachusett Dam, climbing back into Clinton, then at eighteen miles in, climbing back to lake level to close the circuit – well, yes, we know this course borders on sadistic, the tale here was that I poked the graph at that target pace, and it worked. I beat that target pace, and while it wasn’t easy, and those late hills hurt like they always do, I wondered if there might have even been a bit more in the tank. Photos from the race lack that usual Death Warmed Over look; indeed, I look like I’m having fun – not just early on while still in a chatty pack, but even alone mid-race. To be honest, except for those last hills, I was. Even the finish shot lacks that certain post-race devastation. So as a Boston preview, it was a good omen, knowing of course that an extra seven and a half miles to reach Boylston Street will be no trivial difference. 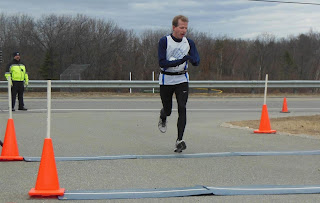 One of the bright notes that led to this bright assessment was the relative oddity of the rather robust north wind. For the second time in as many weeks, the previous being Hyannis with its odd reversal, this day brought the leftover from Nor’Easter Numero Dos, who’s precipitation had departed days earlier but who’s winds persisted. Common sense tells you that you start this race on the east end of the Wachusett Reservoir and make a counter-clockwise lap to the west, but common sense is a bit misguided. The first half is really southwesterly, shifting to nearly due south. I had this in the back of my mind as we cruised those early miles, knowing we could be living the false dream of the invisible hand of the tailwind, only to be crushed at the hairpin turn to the north at the top of the big climb just past mile nine. The rest, save the last mile, would be into the wind.

And it was. Not terrible, certainly not New Bedford style, and even moderated a bit as we traversed tree-sheltered neighborhoods, but certainly a factor, especially late along the lake, presenting a stiff in-your-face obstruction. That screaming downhill along the dam, which should have put another half minute in the bank, just plain didn’t. 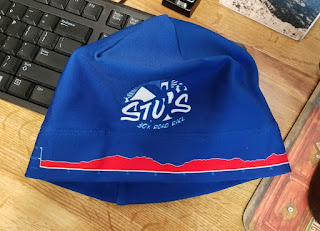 But by and large, the body held up, the pace held down, and even at Old Home Days where all of my fast buds showed up, I still managed third in the Semi-Fossilized division; third which, in my view, provided a sweeter prize than those over-achieving first- and second-placers won. Their wine and gift cards will be gone in a month, but my sweet Stu’s hat, killer cozy, seriously built for running, and sporting the crazy Stu’s course profile around it’s lip, well, that’s swag worth the pain.

Two down, two to go, halfway up the mountain. Mother Nature is clearly playing with her food, but Spring! will show up sometime, and hopefully stick around long enough to give us a non-eighty-degree Boston.

[ Ed. Note: Today marks five years since we lost John Tanner. Take a few minutes to re-read my post on this giant of a man, and keep him in your thoughts. ]
Posted by Gary Cattarin at 1:19 PM