An old adage reminds us that if it sounds too good to be true, it probably is. That conflicts with a different old adage (or perhaps it’s an idiom?) that suggests we should take things at face value. And while seemingly unrelated, I’ll toss in yet another old adage that says that ninety percent (or some similar made-up percentage) of the battle is simply showing up. Actually, there are a lot of old adages. With the number of them I’m spewing here, I’m sounding rather adagio, a punny bit of irony since that means slow, and this is a column about racing which one would hope to be fast.

Where on Earth is he going with this?

Through a quirk of fate, I’m holding a medal that says I finished second in the USA Track & Field New England Championships men’s masters’ five-thousand meters. Wow, lil’ ol’ me, the second fastest master on the track in New England? That’s quite a title. Impressive even. Sounds great.

Ah, but remember, if it sounds too good to be true, it probably is.

So here’s the dirty little secret. Seventeen people showed up for the race. Seventeen. Nine were fast young guys who unsurprisingly finished first through ninth overall. One was a woman. Yeah, one. And she won the women’s race. Funny that. That left the other seven of us to comprise the entirety of the masters race. I didn’t quite grasp these numbers at the time, but later analysis, as they say, eked out these truths.

It’s worth noting that the entire New England Championships meet had been slated for two weeks prior but was postponed due to ugly weather. It’s a near certainty that plenty of people who’d planned to compete found their dance card unexpectedly shuffled. The starting line probably lost two or three competitors for every one of us last-minute hey-why-not-jump-into-this entries.

Second out of seven isn’t as impressive as second out of a hundred and seven, but to be fair, the seven that did show up were solid athletes, competitive enough to follow USATF events, confident enough to consider jumping into a meet labelled “Championship”, and daring to race five thousand meters on the glaring transparency of the track rather than anonymizing crowd of a community road race. Let’s face it, the typical field of one hundred seven or even one thousand seven would fall a little differently on the bell curve.

So then it’s true: ninety percent of the battle us just showing up.

But I really had no intention of doing so. Once again, I was sucked in at the last minute through the positive peer pressure of my Greater Boston club-mates. Another spur-of-the-moment decision made on legs still recovering from the Level Renner only days earlier. And like that marathon relay a month earlier, with no time for niceties like reconditioning my legs to operate in track spikes, which sure would have been nice on that Friday night’s wet, slick surface. No, there was no real prep for this other than behaving myself the night before.

That night before had included a casual pub run with my local Striders peeps. While just a fun run, I’d previously used it as a hard tempo to gain training value from the evening’s outing before the evening’s ingestion began. This time, knowing I'd signed up for the USATF race a mere twenty-four hours hence, I vowed I'd stay with the front of the gang and go no faster. The irony is that when I looked at the comfortable pace that gang led, it occurred to me that I'd need to slice off a full six minutes to hit my goal the next night. Admittedly, that was a bit daunting. Adding to that was the mild amusement that in neither my youthful nor my aged Second Lap days had I ever run a five-thousand on an outdoor track. I’d done it indoors once, several years ago – a dizzying twenty-five laps – but never on the outdoor big oval. There’s something about the immediate feedback of lap splits that changes the race. For the better or worse, I couldn’t say.

With the small field and the fact that the rest of the meet’s events were slated to be held in the next day’s high sunshine, the race itself took on the feel of a hard workout, so without pressure that two misfires of the starting gun led only to amusement rather than any level of competitive stress. The third time being a charm (another adage?), we began our twelve and a half slippery circuits. 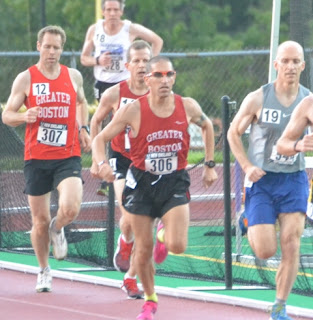 Holding no illusions of matching my best times from younger days, I targeted lap splits that would deliver an eighty-percent age-graded performance. After a quick opening lap and a half, I settled in behind teammate Kris while we clicked off four more right on target – or at least my target. He’d seeded in at thirty seconds faster, so I knew he wasn’t where he’d like to be. When the next lap sagged oh-so-slightly, we swapped spots; it was my turn to pull our train for a while.

Mentally this was an interesting game. Twelve and a half laps, and I was not racing for any position but merely for a target time, so no strategy, surging, or fighting for position. Just even laps, hold it steady, count it down, simple…and still I managed to lose count. Go figure. I could blame the young fast guys lapping us, but sadly it was nothing more than a mobile senior moment. 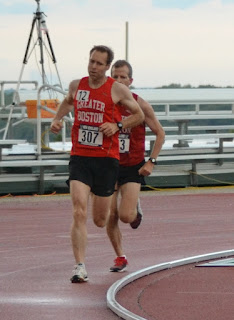 Recovering my mental position, we’d knocked off three more, each a second ahead of target, but Kris was fading and would fall back I know not how far, as I had no need check; so far as I was concerned he was an ally, not a rival, in this game. With three to go, simple wasn’t so simple any more as fatigue grew, but somehow the certainty of the track – the known exact distance as opposed to the vagaries of a road course – made the countdown more manageable as the next two barely held to plan. Last lap, any semblance of form rapidly decaying, still focusing only on time, knowing I was ahead of my target but still seeking all I could squeeze out, suddenly the guy who’d led me by a wide margin all along was coming back, that margin narrowing…and meanwhile I sensed that Kris too was coming back to me, the three of us converging as the finish drew near.

No dramatic position changes would occur, but we three tightened the gap enough to make it interesting to the end. Having arrived with a goal time, and having shaved ten seconds off it, and having not really registered the demographics of the field, I gave no consideration whatsoever to the outcome of the competitive side of the race. I was fat, dumb, and happy (or perhaps skinny, sweaty as hell, and happy). That guy in front of me, Matt, and my teammate Kris proceeded to slug out a few laps of warm-down amidst pleasant runner chatter. 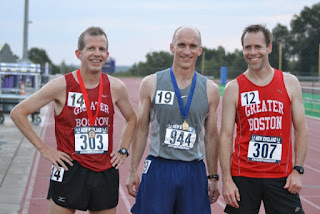 And then, a funny thing happened. Reminiscent of that moment in Arlo Guthrie’s Alice’s Restaurant, when the Sargent came in, pinned a medal on him, and told him, “You’re our boy!”, I jogged back to the finish area and found my utter oblivion interrupted when a race official handed me a medal. I can’t remember ever finishing a race and not checking my place, not knowing what hardware might be coming, and having to literally ask, “What’s this for?” It simply never occurred to me that in a race called the New England Championships that I’d win anything. “Second place,” was the official’s answer.

I know the truth. My time was satisfying for me. I hit my eight-percent age-graded goal. But it wasn’t anything spectacular. And yes, I’d finished second among the masters. Out of seven.

But hey, second in the USATF New England Championships? It sure sounds great. 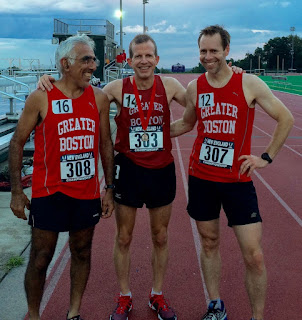