There’s a truism in the running world that you don’t try anything new on race day. In general, I ascribe to that adage, but at some point you come to the conclusion that if you never try anything new, you’ll never figure out alternate strategies that just might be of use. And you never know what might just be of use; sometimes it’s the things you might not expect – like racing on donuts. Now, I’m not saying that racing on a diet of donuts is an advisable strategy, but it happened to work out that way, and the results were good. Not that I’m going to make it a habit, mind you.

Our local club is a generally agreeable and highly gregarious gang that spans all ages, though canted toward us old farts, and represents all abilities save Kenyan (though we did have a Kenyan for a while – not a wicked fast one but a Kenyan just the same), though canted toward the pace of normal people. Admittedly, though I try not to make hay of it, I fall mildly on the freak side of the bell curve, being one of the fleeter of feet in the throng, which can be a tad off-putting when I try to invite passing runners to join our group. But it also means that many of our group runs are for me casual traipses, a pleasant way to relax and be social, hangin’ with me mates, so to speak. I look forward to Saturday mornings, even though I’m not a morning runner, for the comradery and, of course, for the post-run donut run. Short of deep-fried Oreos, that’s about as far as you can get from health food, but hey, if all those miles don’t buy the pleasure of a donut, is life worth living?

A couple of Saturdays back, it was that time of year for the annual expedition over the Hill From Hell, or as is more commonly known, the Clinton Tribute 5-Miler, a race who’s name has taken on a whole new meaning in the post-Hunger Games era. Besides sporting a course so challenging that it has, in my experience, added close to a minute compared to other five-milers I’ve run in the same time frame, it’s also local, low-key, and not so competitive as to require a Herculean effort to rank reasonably well. In other words, it’s not a bad venue to try out something new. That didn’t mean I planned to test deep-fried rocket fuel. It simply meant trying out a “pre-run” strategy.

Since my youthful first-lap days, I’ve always been a slow starter. My high school mile was respectable, but my favorite event even then was the longest the track would serve up to a schoolboy, the two mile, and even in that, the first mile was a struggle. It was usually lap eight before the jets fired and the fun started.

Now in my ripely aged state, my condition is no different except to have become more pronounced. Mile one of any run is a jerky grunt-filled slog, and track workouts demand about a day and a half of loosening the joints before I can coax anything resembling speed from dem’ bones. In that vein, shorter races just aren’t my forte. I live by the mantra that the best warm-up for a five kilometer race is five kilometers, and I’ve sometimes done just that. So the thought hit me: since Saturday morning’s club run was a five-miler, why not stretch that strategy? After all, the race wasn’t till eleven, and five easy wouldn’t take anything significant out of me. And I hate to miss my Saturday mornings with the gang, even if I’d see some of the gang at the race later on. Which is how I ended up chowing a donut at eight-thirty. But hey the race isn’t till eleven, right?

And as it turned out, right indeed. By eleven, all intestinal vestiges of donut had moved on, and the legs were indeed loose and limber when I went out for yet another two-mile pre-race warm-up with the second set of the day’s club-mates. A couple stretches and strides after that, and it was off to the races. And hey, who knows, maybe the slow-release energy of that fat pill worked in my favor? 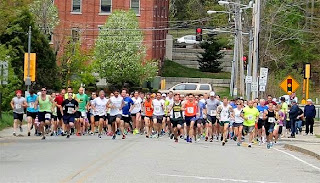 This race, which I’ve written of before, starts uphill and throws something insulting at you during each of its five miles. Just to shake things up a bit, this year the race starter tossed in a an additional comic slap at mile zero by mistakenly pressing the wrong button on his bullhorn, setting off its siren instead of turning it on for announcing. Yep, my bullhorn has that same button, been there, done that, laugh it off! Though we’d had no ‘runners set!’ warning, most of us in the first few rows instinctively took off, confusion and then humor setting in only a few seconds later as our brains engaged. A false start in a road race? Or simply more warm-up? Take two. 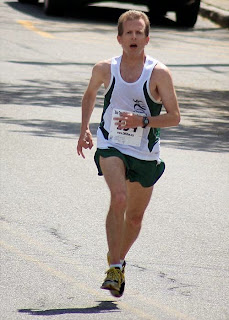 Off for real a minute later, the race itself was relatively unremarkable. Once the short-timer sprint starters sorted themselves out, I found myself in sixth at the top of the starting hill, a little better than I’m used to from my two previous outings at this roughly three-hundred-person event. A mile later, Victim One succumbed, followed by Victim Two another mile after that, leaving me in fourth at the halfway mark, where I’d stay till the end, nice from a place standpoint but by that point already a few seconds behind what I’d targeted on time. And while the top three were still in sight, I was far enough from third place to know a podium finish wasn’t likely, barring someone else’s untimely demise. The game was pretty simple from there: conquer the Hill from Hell and don’t let anyone surprise me, especially an old guy. 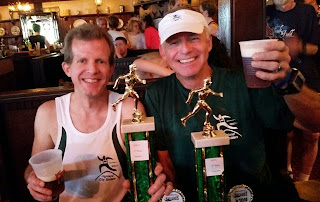 Hell came, Hell went, purgatory loomed. After HfH, the course takes a stride-killing hundred-and-sixty degree turn before screaming down the Dam Hill (which isn’t a mild curse, in fact it rockets down alongside a big dam) before yet another climb, alias Purgatory, back to downtown. So far as mental challenges go, the Dam Hill is the worse of the two. With speed not being my forte, I’m simply not a strong downhiller. And coming off HfH, it’s second nature to back off, recover, and gather your wits when the gravity assist kicks in. But that’s not racing. Racing means maintaining the intensity, staying away from the comfort zone, defying the pain. Sure, it was downhill, but it was downhill at mile four. You have no excuses. I broke my brief reverie and re-lit the engines.

Fourteen seconds separated me from an eighty-percent age-group rating, a standard I hold as my “A-List” of success, but hindsight reminded me that on any other course, I’d have likely arrived at the line a lot sooner, so I walked to the nearest beer satisfied with my race and in line for one of the oversize trophies from this land of misfit toys for my Senior class win. But more pleasing was the comment from finisher number five, who unbeknownst to me was bearing down, or perhaps bearing up, as we made that u-ey at the top of Hell. Thinking he might have some ripe picking in his sights, he told me he was surprised to see me break it open on the Dam Hill. Really? It was noticeable? On a downhill? Dam(n). How’d that happen?

I’d like to say training, mental toughness, maybe a boost from the pre-run strategy, but… Maybe it was the donut? 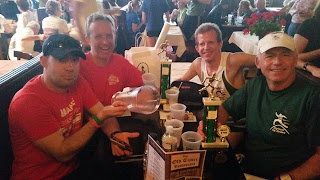