Back to Back to the Woods


Planned races mean sitting and thinking between now and then. Accidental races, like that Wickham Park adventure, involve no thought whatsoever. Somewhere between those two extremes is a middle ground. So when the email showed up the day after my all-out effort at the Level Renner 10K seeking last-minute cannon fodder for a Greater-Boston-led expedition back to the Lynn Woods Relays, a race I hadn’t done in six years, and said relays were only two days out, that was enough time to think about packing the right gear in the bag, but not so much time that I’d be thinking about the race itself. It also wasn’t enough time to think about the fact that my local club had another woods race planned for the very next night. I just jumped on it. Back to the Woods! And that meant that the very next night, I’d do it again. Back to Back! To the Woods!

Part One of this duology wasn’t high-pressure. Our Greater Boston Track Club team intended to field a top-notch men’s open team, and they did, and they were far more than top-notch, and they blew everyone out of the park, making me proud to be wearing the same uniform. Our team, in contrast, was there for a good time, a good workout, and, as it turned out, a good meal afterward with good friends. We couldn’t find four of the same gender, so we went as a mixed team. We couldn’t even find four properly aged runners, so we supplemented with the daughter of a teammate, blowing any chance of old-fart award placement and leading to our brilliantly conceived team name (I can say that because I did not make it up myself), GBTC Masters and Apprentice. 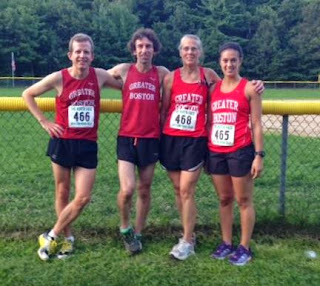 Everything I remembered about this race from six years got better except my relay leg time, but being six years older and, remember all those wounds?, I really had no complaint about that. The course had been altered to get more of it on the gravel roads and trails and less on the asphalt, and it was seemingly easier to follow. The starting and handoff logistics were vastly improved (there are no real handoffs, no batons, you just go when your teammate arrives, honor system). The parking was easier. The crowds were more amiable – probably because six years later, I know a few more folks within them. There were even fewer bugs – at least until the bitter end of the awards and chit-chat. It was simply a rosy evening at the races.

While quite a bit slower than last time, I wasn’t at all unhappy with the race itself. Part of that differential I chalk up to the course change; less asphalt and more gravel equals a slower course, and in the span of a merely two and a half mile leg, little changes can make a big difference. And on trails, who really knows (or cares?) if the distance was accurate or the same as last time? If one trusts the distance, this one was a Personal Worst, but scanning the fifty-plus teams (with no way of knowing the ages of those on open teams, so it’s unscientific), I’d say I fared pretty well against the jury of my peers. I can say scientifically that I blew out nearly forty teams on my leg without giving up a slot. It didn’t win us a thing, but hey, you take your satisfaction where you can find it. But that analysis is fairly irrelevant. We had a fine night out at the races. When all was said and done, we had a late night at the races. And suddenly it was the next night at the races.

Wednesday night saw four hundred runners on one hundred teams, coursing through the woods of Lynn; it was a big wing-ding indeed. Thursday night saw a massive crowd of twenty, yes twenty, coursing through the woods of Berlin; it was a decidedly small wing-ding, perhaps not even a wing-ding at all. But it’s become a summer tradition for our local Highland City Striders known as the “No Frills 10K”. No entry fees, no awards, and almost no goodies save some leftovers from the club’s big 10K a week ago and the case of waters I hauled in to supplement.

Wednesday in Lynn may not have been an A-race, but I’d certainly given it my all, and I was questioning the sanity of showing up at anything labeled as a race the very next day. Alongside me on my warm-up, club-mate Will (blue shirt in the picture), who’d run – and won – the club’s big 10K only two nights earlier, was asking himself the same question. Knowing ourselves to be of similar caliber (though he of considerably fewer years!), seeing no obvious threats around us, knowing the casual aspect of the evening’s festivities, and most importantly both agreeing that all-out racing was just plain silly in light of our previous evenings’ endeavors, we inked a mutual non-aggression pact: run it hard together as a workout, bring it in together. That pact had an out-clause, however. Will stubbornly promised he’d chase down any youngster who tried to upset this freshly minted New World Order. I figured if that happened, I just wouldn’t care and told him (in jest, of course) to just trip the kid.

It’s a two mile circuit around Gates Pond, so the course is simple: start a tenth of a mile off the pond, spin it thrice, zip back out that tenth, and you’ve got 10K. But it’d diabolical, too, because each lap brings a good half dozen ups and downs, a few of them rather noticeable, and all on gravel roads with plenty of poor footing. It’s ideal to wear you down. Within two minutes it was clear that our back-room plotting was for naught. Precocious Peter (center in the picture), a mere wet-eared lad of eighteen about to head for college, hit the gas and blew our plans. Will, true to his threat, tried to track him. You can say I’m old and wise with experience, or you can say I just didn’t have that much fire in my heart, but I can tell you that I just said, “Whatever”. With legs of rubber, there wasn’t a lot to be done, at least not without pushing into the damage zone, and that race wasn’t worth it. Besides, we’d barely started. Either the kid’s got it, in which case there really was nothing I could do, or he’ll fade like a kid and age will trump inexperience. I certainly didn’t slack off, but I certainly did accept my karma de jour.

The kid had it, and ran it well all the way home, though in the end, the half-minute differential between us probably happened almost entirely on that first lap around the pond. He didn’t fade, but Will came back to me at the close of the second lap, and with the overall and not-terribly-coveted crown rather certainly gone for both of us, for a few minutes it seemed that the mutual non-aggression pact was back in force. I’d have been happy for the two of us to push each other home in a solid workout. But a half-mile into that last lap, my restored partner conceded fatigue, he was baked, off you go, he commanded…

It’s an odd situation. Where does cooperation and geniality stop, and competition begin? Given that green light, knowing my partner – or rival? – had released the bond of our gentlemen’s agreement, what exactly were the rules? With ten minutes left – including the third round of those highly noticeable hills on the back-side of the circuit, the possibility of my own fade was still quite real, and while I wouldn’t have cared if he rejoined me, my worn and wounded legs didn’t want a dogfight. I took the logical out: if you don’t know the answer to the question, just don’t let it be asked. Lap three clocked in faster than lap two primarily because I didn’t want to have to answer that question, a question that, in this context of a casual twenty-person race where even if I’d rolled over and walked it in, I’d still be the quickest antique on the lot, simply didn’t need to be asked. In the end, Will rolled in about a hundred feet or so behind me, we jogged a pleasant warm-down amidst the beauty of the forest, and agreed that once again, we’d had a fine workout and a fine night at the races, which is about all one could hope for having popped in three races in five days, the last two back-to-back.
11:18 PM 9/6/2014
Posted by Gary Cattarin at 11:25 PM