[Ed Note: First things first; some housekeeping. After a stretch of wandering in the desert with little to expound upon owing to injuries, reduced training, and so on, I now find myself about a half-dozen stories in arrears. Brace yourself, prodigious prose productivity perhaps pends!]

Life deals up unexpected turns. Who’d have guessed that within a few days of each other we (yours truly and Dearest Daughter the Younger) would find ourselves first running on the edges of an abyss formed by the fires of a thousand volcanoes and a billion tons of volcanic ash, and then later running among the giants of the damp and drizzly redwoods, populated by the oddly charming if severely unappetizing western banana slugs. Experiences like these are not soon forgotten. To quote the Talking Heads, eviscerating a few irrelevant interim lines, “And you may find yourself in another part of the world, And you may ask yourself, well...how did I get here?”

In part, blame those test shoes. Certainly you remember (because I know you recall all that I write, right?) the trail shoes I was sent to test, the shoes that inspired me to trade pavement miles for trail miles, the shoes that led me like a lamb to the slaughter to a number of nasty wipe-outs, bashes, and bruises (not the shoes’ fault, mind you). Yes, it was the shoes that screamed, if you’re going to be tooling around the American West hiking on trails through expanses of great awe, why not run a few of them instead? Besides, I promised I’d put miles on their shoes, so into our elaborate expedition we slipped a few fabulous forays.

Yes, as you read last time, we went all the way to Eugene, Oregon to run a half marathon just because it finished on an oval stretch of rubber entirely identical to every other oval stretch of rubber save for the fact that a lot of famous and talented people have run on it (and even that doesn’t truly make it unique…). But you can’t go that far, run the race, and just come home. The knee bone’s connected to the thigh bone…and the next thing you know…

Once airfares dipped enough to make it somewhat less than entirely ludicrous to consider travelling to Eugene for the race, practicalities set in. There’s the expo and packet pickup, there’s the fact that you don’t want to race right off the plane, nor do you want to get back on the plane post-race sans shower (two things an airline passenger doesn’t want next to them: an Ebola patient and a sweaty runner), so it became instantly obvious that this would be a multi-day itinerary. From that point, the mysteries of airfares dictated what days thou shalt and shalt not travel.

But beyond the practical bits hung the simple fact that when you’re heading that far away, and to a place of amazing beauty and geological excess, you might as well soak it in. While DDY had never reached the Pacific, the fact that I had on many occasions didn’t make me any less interested in squeezing all the adventure I could from this excursion. You can see where this is going. Our race in Eugene quickly transformed into a ten-day extravaganza, orchestrated to cover as much ground as humanly possible. A restful vacation this was not.

I could spout for pages on the places we went, the wonders we saw, but you, dear reader, come here for running adventures, so I shall not disappoint nor stray too far. The challenge on this odyssey was to find ways to fit runs in, when our days were filled with hundreds of miles of jaw dropping scenery (it became a watchword of the trip to grunt, “WHOA!” virtually every time we turned a corner to a new vista) and miles of hiking and exploring. Somehow I managed to sneak in a half-dozen outings, even a double one day, morning and evening coming in two separate states. But those shoes egged us onto the trails…

When you think of the Pacific Northwest and Oregon, some places roll straight off the must-see list: Mt. St. Helens, Mt. Hood, Crater Lake come instantly to mind. We hit them all, but then dug down the list of obscure sights to one I’d never heard of: the John Day Fossil Beds National Monument. Borne of my desire to show DDY the ‘other’ Oregon, the deserts east of the Cascades, the part I’d never myself seen, she scoured the maps and found this gem. I’ll lay a bet that you’ve never heard of it either. Now you have. Go you must, said he Yoda-like. 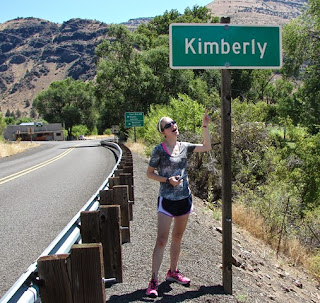 The Monument, which takes its name from the area of the John Day River, the town of John Day, and ultimately John Day himself, spans three ‘units’ spread across many miles. That inter-unit travel time isn’t lost, however, as the scenery outside of the monument land often matches that within for its ability to amaze and delight. Still, by the time you’ve reached a part of the monument to explore, you’re ready to shake off the car legs and crank up the heart rate. Our plan to fulfill this need was to trail run a circuit at a place called Blue Basin in the Sheep Rock Unit. I’d tell you what town that’s near, except there aren’t any. The nearest named place is Kimberly, which so far as we could see, consisted of two buildings and a sign worthy of photographing for DDY’s best friend of same name back home. 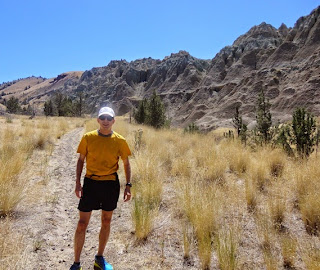 Again I could spout for pages on the geology that makes Blue Basin what it is, but I’ll summarize it in two words: volcanism and erosion. The combination is stunning, and at this spot, a short trail leads up into the belly of the basin itself, a flaming example of erosion. But the real action is the trail that circles the ranch, taking you around and above for the birds-eye view. It’s not long – just a few miles – but those few miles take you from the valley floor, where we swear we saw a sign that said the trail rose only one or two hundred feet, to the summit above the basin, which is, in fact, over seven hundred fifty feet up. 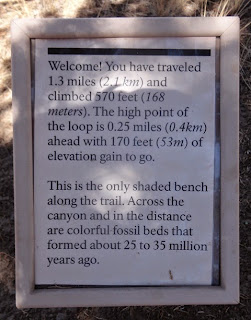 About halfway up, a sign told us just how wrong we were. The annotated photo below – look closely! – presents an idea of scale; yes, that’s DDY in the red box chugging up the mountain! From the top, the views into the basin, the views across the valley (remember, I said volcanism, and those are some of the area’s sixty layers of lava you see), the views up the valley over the painted rocks, spectacular here and even better elsewhere in the monument, simply dazzle the eyes. And then it’s time for the trip down, again eye-popping and a bit nerve-wracking, hugging hillsides, zigzagging down slick gravel switchbacks, skidding on the fine-grained dust borne of those layers of volcanic ash, and plunging into the basin where you can’t resist heading up inside for the view from another angle. You forget that you’re in the desert and that it’s ninety-plus degrees. You’re simply too awestruck to care. 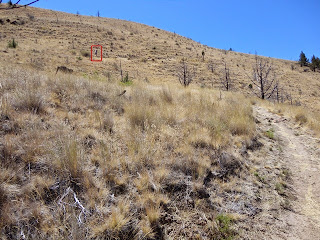 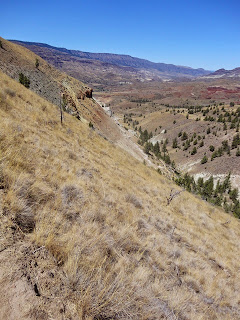 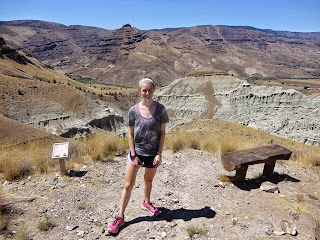 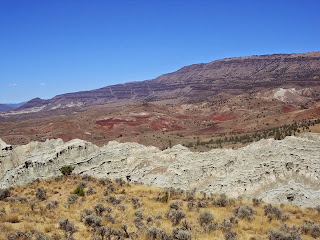 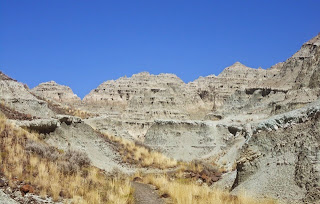 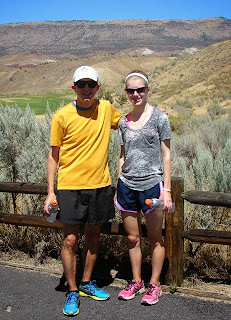 Wow. But after that, it was time to run a race. And then, it was time for a recovery run, and that time found us about five hundred travel miles down the road, in a very different place. This time, no hills. No desert. No volcanoes. And really, though it’s never truly absent, no erosion. Instead of big vistas, big trees. Really big trees. 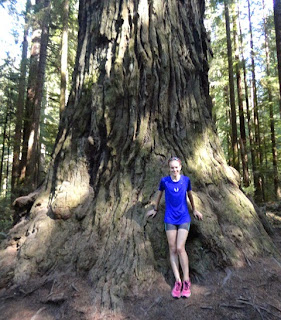 We’d scoped our recovery run from three thousand miles away, and were aimed for the northern California cost amidst the giant redwood trees. The Coastal Trail in Del Norte Coast Redwoods State Park looked like a gorgeous redwood-strewn sweep above the Pacific, leading to a trail who’s name made it simply irresistible: Damnation Creek; likely not runnable but a short hike to the ocean itself. From afar, this looked like a dramatic way for DDY to finally reach the waters of the western ocean. But from up close, an obviously very knowledgeable ranger pointed out a factor we’d missed: mountain lions! Apparently the Coastal Trail was not the place to be, especially for our planned evening jaunt. DDY would have to (and did) find those Pacific waters elsewhere. 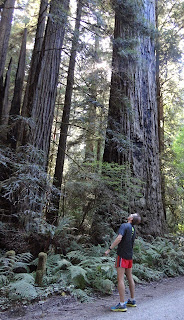 Having gained this advice while still inland, still blissfully unaware of the foggy mid-fifties gloom that would have greeted us - and eliminated our views - on the coast, we were entirely ignorant to how perfect we had it as we set forth through the filtered sunshine of the forest of giants on our replacement run up the Walker Road (irony, anyone?) in the Jedediah Smith State Park east of Crescent City. The road and its neighboring trails offered up flat, easy jogging, perfect for DDY’s post-first-half aches, surrounded by the unimaginable – until you’ve seen them – immensity of the redwoods. And if the trees weren’t enough, the giant banana slugs served DDY a slimy delight, the blackberry patch at the far end served me a feast, and best of all, the warm invitation of the Smith River at the end of the trail served both of us the perfect recovery. After all, aren’t wicking running clothes designed to get wet? 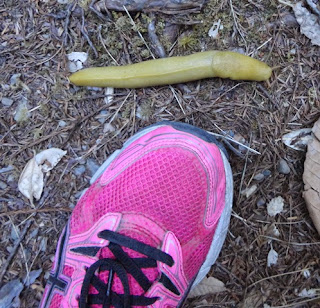 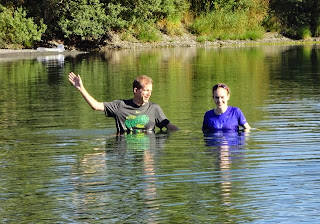 Posted by Gary Cattarin at 9:45 PM