[Ed. Note: This was written in late May. See the next column, “Soviet Revisionist History” for my lame excuse as to why it’s being published in July but dated June.]

What do economists and runners have in common? Both can truly recognize trends only in hindsight, but both claim the clairvoyance of being able to spot those trends well before they’re proven. In that respect, I’d say that meteorologists have a better track record. Despite this, I’m going to call the Florida race before the hanging chads have been plucked from their ballots. On second thought, that brings back really, really bad memories. Forget I brought that up. Please.

We’ll take a different tack: a funny thing happened on the way to the forum last week. I got there faster than expected. And the economist-runner within wants to point out what could be a good trend. Is this, or is this not, the return of at least some of that vaunted mojo?

The point of this uncompensated writing odyssey was and still is to explore the adventures of running and racing later in life. Plenty my age and older run, jog, and stay active, but being the competitive type (no, really, me?) and being blessed by my Creator, whoever or whatever he/she/it may be, with the ability to move at a decent clip relative to most of my peers means that what I try to relate in these pages is the skewed vision of someone who tries to compete like a somewhat young guy but who happens to live in the body of a somewhat old guy. 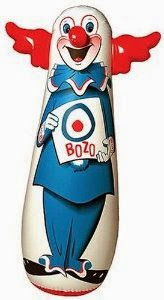 A big part of that young / old dichotomy is the overriding reality that the old part will win. I will slow down. I will grow less competitive in general, even if I hold steady among my aged peers. That’s hard to accept until it’s forced on you, and so each time I’m knocked down, it’s human nature – or at least my nature – to try to bounce right back to where I started, like those blow-up Bozo the Clown punching toys we whacked as kids. (Disclaimer: I never owned one. I don’t regret that, either.) As kids, we’d hit Bozo hard to try to make him stay down, but he always came back up (excepting that final, piercing blow, which I never witnessed). As adults, we’d like to think we can do the same, but we know it won’t last. One of these times, we won’t get all the way back up. I’m not talking about that final piercing blow, just the one that makes us come up a little… deflated. The question is, which time will it be?

Before the Achilles devolved so badly as to force surgical action last summer, I was arguably in the best shape of my adult life. I knew that electing for repair work would knock me down, and that getting back up would be hard work. I didn’t count on the bonus blow of the clots making the return path that much steeper. And now I wonder if I’ll rise back up fully, or return a little… deflated. Will it be this time? Or not?

Last week seemed to hint toward the not side. The leftover wounds from Boston were fading, the sun was finally out after a week of gloom, and something clicked. I know from experience that changes in my fitness come in chunks rather than in smooth progression. A chunk seemed to happen. My body felt better, my training pace dropped, and as noted earlier, I got there, wherever there happened to be on several successive days, faster. No, the Achilles annoyance didn’t, and probably never will go away entirely, but the rest of the machine seemed in better tune. It felt like maybe, just maybe, oh so long after last summer’s knock down, I might be finding that mojo again.

Then again, check back in six months. All those economists can probably tell us how we were really doing, and perhaps I will be able to as well.