The fact that today’s run was a shorts-and-one-shirt affair at a ludicrous fifty-six degrees in a New England January was notable enough, considering the contrast to yesterday’s thirty-five degrees. But it was entirely absurd compared to only one day prior, when there was a complete lack of degrees. Yes, zero to fifty-six in two days (which oddly is about equivalent to the typical acceleration of my Prius), and we’re going back down close to zero again tomorrow night. I was thinking of that old tune Red Rubber Ball by Cyrkle (seriously, who remembered that band’s name?), trying to come up with an image of something bouncing wildly, until I listened to it again and remembered it’s mostly about recovering from heartbreak. So let’s just stick with a yo-yo. 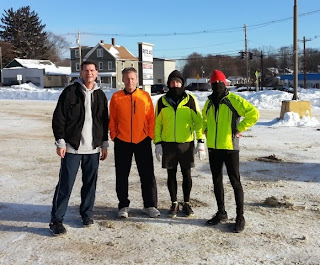 Saturday was more of a missed opportunity than a notable adventure. Yes, when a few of us looneys departed at eight in the morning, the car’s (quite accurate) thermometer read nothing, none, no degrees whatsoever. And that was, in fact, a modern record, my previous being four above, but on that day it had been windy and I’d been foolish enough to run to the ocean’s edge, whereas Saturday was sunny, still, decidedly inland, and, while extremely crunchy underfoot from the latest frozen precipitation, quite pleasant. Not to mention that it rocketed up to eight whole degrees by run’s end. No, the missed opportunity was that my running companion that day had gone out forty minutes earlier to pop in a few miles beforehand to boost his day’s total, and his caromometer (new word, just invented it, remember you saw it here first) reported that he owed the world five degrees. Should’ve joined him. Now that would have been cool, since my all-time record going back to the days of youthful yore was a youthful minus four. Ah well, next time…

All of this pales, of course, to what our friends are experiencing in Minnesota, you betcha’, but whatever… Even for them, that's different. (No, not the best interweaving of Minnesotan-speak, but I tried…) I’d say my heart goes out to them, but if it did, it would freeze solid before it reached them. I’ll concede that twenty-below is a good excuse to use the hamster cage.

The yo-yo lens of ups and downs is apt for the tale of a race that frankly has few of them (that being, it's mostly flat save one small hill at the end). For the sixth New Year’s Day of the nine New Year’s Days I’ve been running, I dropped in on my old neighborhood, or at least a mile or so up the road from my old neighborhood, for the Freezer Five. It’s notorious for its in-your-face west wind on the outbound leg that never seems to come back to help on the return trip (no exception this time), and occasionally for its wild weather (this year’s was cold but otherwise well-behaved), but it’s always good for a decent dozen-plus solid competitors among the three-hundred or so brave souls, and a great spread including – yes – donuts afterward to toast in the calendar rollover.

This being my first foray into the world of racing since Boston – yes eight and a half months! – I wasn’t expecting much. Having put in my first run with anything approaching speed only two nights earlier at the pub run, all I really hoped for was to hit that night’s three-mile pace and hold it for five. Baby steps. This was, after all, the first attempt at an up after an exceptionally long down.

Cutting to the spoiler, it was good that I didn’t have high expectations, because no magic appeared. The best assessment would be to say that my expectations were in order. It was an up, but only a slight up. I hit that target pace – ducking under by a whopping two seconds per mile – but there was no engineering involved to end up there, nor was the process pretty. The irony was that being fifty for the first time at this race, this slightly anemic run – in fact the slowest of my six Freezers and almost my slowest five-miler race ever – was still enough to snag the fifties division win as well as the fifties division club five-miler record. That too was an up, but the down was the clear message of how far I’ve got to go, with Hyannis, Boston, and some March event yet to be decided looming soon. 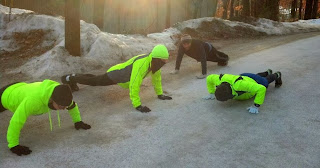 While I love this race, my usual complaint is that they (our friends who put this one on, the Central Mass Strider) aren’t very good about marking splits. This year, it wasn’t the case that they weren’t very good about marking splits; they were downright abysmal about it. Nary a one. Now, I still run without GPS, and typically I want to see those markings. But I have to admit that on Wednesday, I didn’t really care that they were missing. What they would have told me would have likely been rather depressing. I can best describe the day as a one-mile race and a four-mile fade. It wasn’t a strong performance (and it wasn’t helped by the fact that the day before, we’d stopped and dropped for push-ups so often on our New Year’s Eve Day club run that my upper half was not at all cooperative in aiding the last-mile effort). Being utterly oblivious to the splits was a blessing, and it made the fact that my resulting pace was spot on what I’d aimed for that much more amusing. Still, three minutes off last year’s time was a pretty serious down. 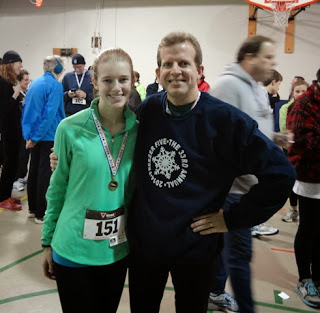 But the whole thing was a pretty serious up. I was over the hump. I’d raced again. I’d started to rip out those cobwebs. Mentally I felt I’d turned a corner, even if physically, that darned ankle hurt pretty bad as I jogged out the warm-down to reel in Darling Daughter the Younger, running this one for her first time. A couple days later, damn the torpedoes and the Achilles, with Boston only a season away, I hit the roads for fourteen at a decent clip. And today, childish joy, splashing through inches of slush in the nearly sixty-degree post-rainstorm-snow-remnant-mess, feet soaked to the gills and simply not caring about it, because things are starting to feel just a tiny bit more normal again. The darkness is starting to recede, and I’m thinking there may indeed be more up down the road.

Of course, I could never really keep that yo-yo going when I was a kid. Bad metaphor, I suppose.

Shocker Department: Those of you who know me and don’t already know this may be shocked to know that I’ve finally gone and done it. As of New Year’s Eve, yes, I’m on Facebook. Scary, I know. What’s the world coming to and all that. But it’s true. Relish it.

Posted by Gary Cattarin at 8:48 PM