John Would Have Laughed At That

There are days when you marvel over how perfectly the gears turn, how everything goes as planned without a hitch, and how you can’t believe that you navigated the rapids of random events with no surprises. And then are those other days. But the beauty of life is that while some of those not-quite-so-perfect other days may spell disaster, some are instead the kind of days when you just smile, enjoy the ride, and know that it just doesn’t matter. All is well anyway, whatever happens. A couple of Sundays back, the first ever John Tanner Memorial 5K was one of those kind of days. 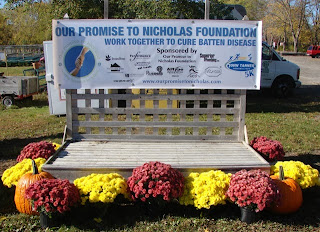 Other than nagging pain of thinking how I shouldn’t be wearing the name of my dear friend across my chest, unless he had just opened a new bar or something like that, it was a joy to honor John’s legacy. By and large, for a first-time event, it was a stellar day. Fine weather, fine crowd, fine food (and plenty of it!), fine fun, and a fine chunk of change raised in John’s honor for his charity of passion, the Our Promise to Nicholas Foundation, all due to the efforts of a fine bunch of people who built this event on love for John and passion and conviction for their cause. There was just one eensy, weensy, tiny little thing though, a minor detail in that, well, the five kilometer race turned out to be barely three kilometers for the first couple dozen runners. The winner, my bud and training partner Issam the Problem Child, just about ran me over as I strolled leisurely through the finish chute, not expecting any action for another seven or eight minutes. He might have wondered why I was in the chute, in the way, but mostly he wondered why he was in the chute to begin with…already. Ah, Houston, we had a problem here.

Amidst the confusion, someone – I recall not who – made the comment of the day: John would have laughed at that. And it was true. John Tanner, the man we honored that day, the man I’d never heard say a bad thing about anyone despite many miles of my harping on one topic or another during our runs together, simply would have laughed off a major screw-up in his own race. He’d laughed off bad lap counts on that day we did the silly indoor half-marathon. He’d laughed off bad race logistics, bad post-race food distribution, bad weather, and just plain bad races. In fact, he’d laughed off just about any misstep in the road of racing and the road of life that he’d faced. And had he been there for his own memorial, he would have laughed at this one, too, loudly and heartily. So at the end of the day, we just smiled and enjoyed the ride. It just didn’t matter.

I’d held back in getting involved in the planning of this event. As much as I would have liked to do so, I just didn’t think it prudent to commit my involvement knowing that I was heading for surgery and a recovery of unknown dimensions. In hindsight, that was likely a wise choice, considering I never counted on being down for the count again from the Clotskys, and up till just recently I still fell pretty firmly into the category of mobility impaired. Thus, come race day, my official role was simply to be the floater, the Wizened Old Goat of race organization, wandering around looking at what was broken amidst the myriads of plans, well thought-out but done so by a first-timer crew who wisely knew that they didn’t know everything. This title was also, of course, a euphemism for, “What do we do with this guy who can’t run at the moment, when we’ve filled all our volunteer slots?” I was tasked to plug the holes and seek that which could be improved at the last minute. 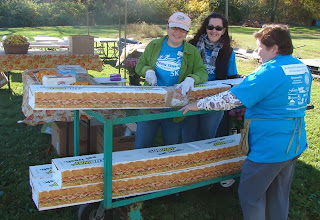 On the whole, the race team did a great job on the event in general, so I focused on the running experience. At the tail end that meant working with the hired-on timing crew, which included a comically frightening drive from the start to the finish, separated by about a half mile, with one of their team clinging to the trunk of their packed-to-the-gills car, just so they could give ol’ cripple here a lift…yikes! It meant calling in my Highland City Strider Lifeline to deliver and set up our finish chute, a detail overlooked (future note; no, the timing company doesn’t provide that). It meant doing a little pre-race consulting on the weird little twists, turns, and a double-back they’d built into the start of the race. To me, that first quarter mile looked a bit ugly, so I counseled them on staffing the turns thoroughly. After all, we didn’t want to have to launch any search parties for lost runners. I figured if we got them out of that mini-maze, we were all set. As so often happens, I figured wrong.

Having been to so many races where the course isn’t even posted, I was pleased that each runner was given a course map. Granted, the early mini-maze just appeared as a smudge, but we had that covered. Everyone else could clearly see the out, the side loop, the further out, the turn-around, the back, and the cut-into-the-driveway-to-the-finish. Clear as mud to everyone, right? So it came as somewhat of a shock when Issam showed up at the finish line barely a minute after the timing crew managed, after a significant fight against stubborn technology, to get the show clock operating.

Yep, it was clear as mud to everyone except the two course marshals at the end of the side loop, who somehow weren’t in the loop, and knocked the race for a loop. Issam the leader knew the course and tried to debate them when they sent him astray, but they were insistent, and they were the officials. It’s a tough spot for any runner. I’ve been there myself. You think you know the course. You’re being told otherwise. You have only seconds to make the decision: obey or ignore the officials, the former at the risk of going what you believe to be the wrong direction; the latter at the risk that no matter how right you think you are, you might not be.

He buckled and heeded their instructions. Twenty more followed him. Many of them thus ran world record times for a 5K. Meanwhile, at the finish line, just about the time we figured out what happened, apparently so did those course marshals, who started sending people the right way. A ten minute runner-free gap ensued before runners who went the entire distance started filtering in.

The irony is that both course complexities – the early mini-maze and the mid-race side-loop – could have been eliminated by just moving the turnaround on the out-and-back portion further out, and that would have added some nice scenery as well. Ah well, we live and learn…

Well before such contemplations of future upgrades could be entertained, there was the immediate mess to clean up. Some in the organizing staff felt that the awards needed to go to those who ran the entire distance. That didn’t sit well with my runner’s perspective, considering that the error wasn’t the athletes’ mistake, and since I knew that nobody in the field would have challenged Issam had he and all the rest run the full distance. We kibitzed on the concept and converged at honoring the winners, no matter the distance, and devised some makeshift awards – Our Promise hats – for the “full distance” division. This left a few heads spinning, not unlike trying to explain scoring in a cross country meet, so the organizers decided they’d better hand me the microphone to announce the explanation of the awards. Starting the day as a volunteer without portfolio, I ended up as emcee of the podium. Funny, life goes that way sometimes. It was fun announcing the new world records in the ersatz 5K.

Nobody complained, nobody worried, because we weren’t there to do so. We were there to honor the man, the giant we’d lost, and we did so no matter what burps interrupted our day. John’s family reported en masse. Nicholas’ family and the Our Promise to Nicholas folks arrived in force. John’s coworkers and friends, present and accounted for. The Highland City Striders, John’s (and my) club, made a strong showing. And another John, Vermont John, the man who’d been present in New York City when our Rocket John went down, the man who was the only link to provide comfort to John’s family on how his demise was mercifully quick and painless, the man who’d been thrown into something he hadn’t asked for and had no previous connection to, yes, Vermont John showed true class by making the three-hour trip to come and honor the man.

Honoring Rocket John Tanner was easy. He just had that effect on people.


Images from the day
Issam is confused to be done, but pleased to be first in line! 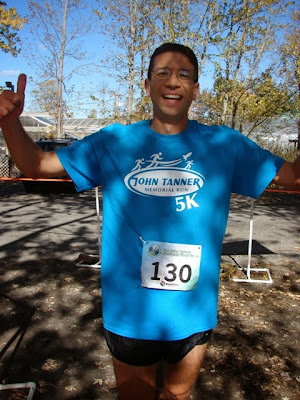 John’s brother Jim motors it home and enjoys the finish 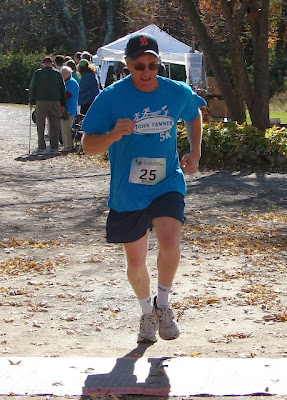 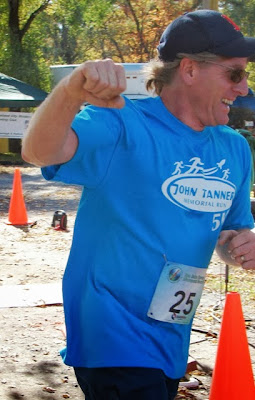 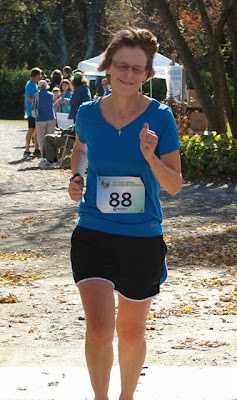 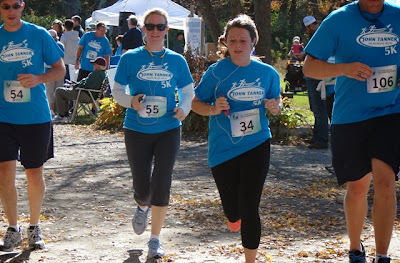 And some even wore John’s medals…here, a Boston Marathon medal. 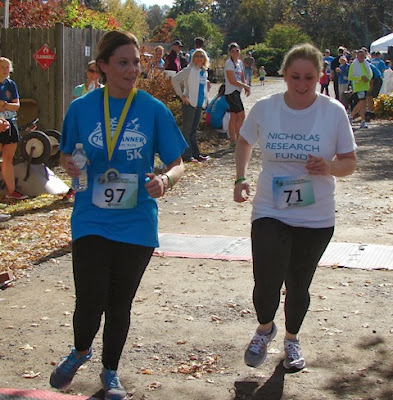 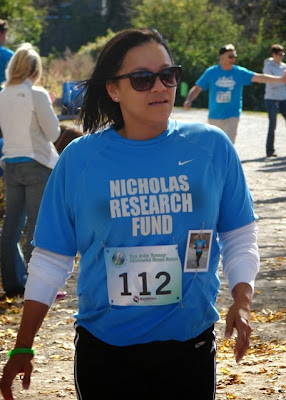 And the Highland City Striders even brought the tent 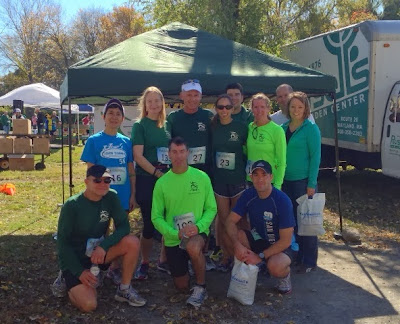