The deadline was looming. On the seventeenth of October, financial damage was certain to occur. Failure to act would result in irrevocable loss. And the two parties were still far apart, not agreeing even on concept let along on execution of a plan. Tensions rose. Tempers flared. No solution was in sight.

Pardon me if you think you’re reading about the national stage and the battle between responsible legislators and those who think that terroristic tactics are allowable among decent people. You don’t have to guess which side I’d be on, considering the value I place on having health insurance, considering that a relatively young and extremely fit individual just racked up bills nearing fifteen thousand dollars (pre-insurance, thank God) to clear my pipes from the debris that appeared after the Achilles fix. And no, that fifteen thousand didn’t include the Achilles fix. Suffice to say that there are a few people in Washington whose pipes I’d like to clear.

No, this tale of dissent was close to home, and we laughed later at the irony of the fact that the airline voucher I’d received for being bumped some time back was set to expire on the same day as our nation’s global credit standing. And with work, school, health, weather, and our tastes which simply don’t agree with the rest of the resort-driven, cruise-ship-crazy, casino-happy world, we just couldn’t decide what to do with it. We hated to see it expire, but...

I’m happy to report that despite the fact that we’re both sipping tea at the moment, we don’t behave like those with the associated moniker, and I should be adding a new running locale to the list sometime this winter. Other than to say there won’t be any hill work, we’ll leave it at that for now, and add the running aspect when it occurs. 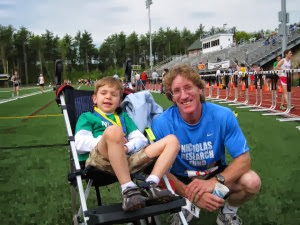 But ponder again that extremely fit individuals have no assurance that they will avoid major health issues, or worse. And in that vein, remember our tragic loss this past spring, when Rocket John Tanner was taken from us in shocking fashion in the midst of his prime (see His Final Mile). Friday marks seven months since that awful day, and his family and friends are still recovering. A big part of that recovery happens this Sunday, October 20th, in Wayland, Massachusetts, where John worked. I don’t ask things like this often, but I’ll ask today: If you are reading this and are in reasonable travel range, please join us for the John Tanner Memorial 5K. Hit an early church service to clear the late morning, do whatever, just come.

Besides John’s passion for running, he had another passion: a little boy named Nicholas, the grandson of one of his fellow employees at Russell’s Garden Center in Wayland. John took a fancy to Nicholas many years ago, and took Nicholas’ burden, a rare and life-threatening brain disorder known as Batten’s Disease, upon himself. Batten’s Disease isn’t one you’ll hear about in the popular press. You won’t see Team in Training touting it at the major marathons. It has few evangelists pushing for a cure. John took up that challenge.

I lost count of how many races I ran with John over the five brief years he graced my life. But in nearly all of them, John eschewed team colors, Boston Marathon jerseys, or anything else catchy or recognizable in favor of his simple blue tech shirt emblazoned with the words “Nicholas Research Fund”. Sometimes he was actively raising funds to hopefully, someday, somehow help Nicholas. Other times he was just doing what he could to get the word out about this mysterious malady. It wasn’t a popular or recognizable cause, but it was the right cause, and it was his cause.

On Sunday, Nicholas’ family, John’s family and friends, and John’s coworkers – his Russells’ family, will honor him in the best way, by holding a race for the man who lived for such events, and at the same time raise funds in his name to help Nicholas. The race will start in the center of Wayland (behind the Wayland Town Buildings at 41 Cochituate Road), traverse beautiful back roads along the wetlands bordering the Great Meadows National Wildlife Refuge, and return to finish on the grounds at Russell’s. Details of the race can be found at OurPromiseToNicholas.com or in this article in the MetroWest Daily News and registration is either on-site or at this link.

Whether ten or a thousand run, it will be an appropriate honor. Please come and swell that number.