It’s Chapter Three, and it just occurred to me that this rapid-fire adventure of four races within a twenty-one day stretch actually spans four states. How cool is that? It started in Westfield, Massachusetts, the next race five days later was in Corning, New York, and this latest began in Nashua, New Hampshire. There’s barely time to write this before the plane leaves for Kentucky for Chapter Four, the finale!

An odd outgrowth of the phenomenon of getting to know so many people, as I wrote about a few weeks back, is that I’ve accumulated clubs along the way. Starting with my local and beloved Highland City Striders, I found myself signing up for various clubs for various good reasons. The Squannacook River Runners have invited me to their post-Boston-Marathon party for years, so it just seemed fair to join their club and support them with a few bucks in dues.

Membership has its privileges, so they say. In this case, there’s an interesting race known as the Mill Cities Relay, named for its course along the historic Merrimack Valley through the cities that drove the American Industrial Revolution. I’ve had my eyes on it for years, but curiously, you can’t run it unless you happen to be a member of a club in the Mill Cities Alliance. While Greater Boston and Highland City are my primary affiliations, neither is a Mill Cities club. But Squannacook is.

Squannies are very much like my local Striders. It’s a great group of people, though not a highly competitive club, save a few people here or there, one of whom we recently recruited to our GBTC Masters team. But they turn out in droves for Mill Cities, grouping themselves on teams with fish-themed names in keeping with their club’s ‘river’ name. I tossed my hat in, and found myself on the Fire Eatin’ Fish, a rather killer team with my fellow GBTCer Mark, his wife, and two more strong racers. I also found myself in a very cold and icy parking lot at a very early hour Sunday morning with nearly sixty Sqannies getting psyched before heading to the start in Nashua, where I was lined up for the opening leg.

There’s a side story here. I’d run a relay with a Squannacook team long ago, in 2006, the Fred Brown all-the-way-around Lake Winnipesauke classic. That day too, I’d been assigned to a team with Mark (that’s when we met), and had likewise drawn the first leg. And while I delivered a strong leg for my team, it didn’t start out so smoothly.

What happened is hard to explain without drawing a map, but suffice to say that in scoping out the course the night before, I didn’t have time to drive the last half mile, and that was critical. On race morning over one hundred teams lined up in a driveway to start the journey, the first stage of which was to run fifty feet to the road and turn down the course. The problem was that my internal compass knew we were facing south and needed to head west, which meant turning left, and I never questioned this assumption. I lined up on the left side of the field, eyed the fence post at the corner, and focused on getting around it before the crowd tried to make the turn. I succeeded wildly, rounding the post and heading west before everyone else…because everyone else headed for the other post and headed east, as the course looped around itself before going westward ho.

The embarrassment of taking any wrong turn in a race can only be topped by doing it from the starting line, somehow not noticing that a hundred others all went the other way. I still marvel at that gem. And while my team was forgiving, I still wanted to make this one go right, and go well. The Squannies deserved nothing less.

But this one started on a rough note as well. Though I pretend otherwise, I am admittedly quite OCD. I get to the race early, I sweat the details of my extensive warm-up, I manage various functions incessantly, I get my head into the race. They say it’s healthy to let go. Being at the mercy of your club and your team’s schedules means letting go, admitting you can’t control everything, and making the best of it. Sometimes it works out. Sometimes you find yourself arriving barely in time, standing in a long line for a single stall, trying to warm-up by jogging in place while waiting, and subsequently bursting toward the starting line, barely staying upright across the ice-glazed parking lot to the line, relieved that the start is delayed five minutes giving you time for a few strides, but that’s it. Crappy warm-up, tense, just not in the space. Healthy? Debatable.

Fortunately, it didn’t seem to matter. The brick dropped – yes, they start this race not with a gun, but by dropping a brick which we presume came from a real mill building – and once we executed what my frequent rival EJ Bad-Dawg called a “Scoobie Doo” start, 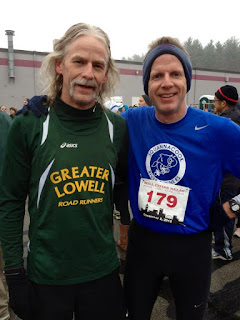 where your legs spin on the slick, icy ground, but you don’t actually move right away, there was no question which way to go this time, and we seemed to be going fast. The forecast of high thirties was off by a good six to eight degrees, making for a foggy, dank, chilling, and most importantly, hazardous day; the bridge over the Merrimack at the half-mile was frighteningly treacherous.

Once we found traction, nobody could ask for better running weather. Windless, cold, and fast. Frankly, I had no idea how fast. I’m guessing by the fact that the four- and five-mile markers were so clearly painted that there were in fact ticks at the one- and two-mile points, but I zoned right by them. For twenty minutes I was either flying or dragging, who could tell? The cylinders seemed to be clicking well, but whether that was because of a good day or simply because I wasn’t making much steam, I couldn’t say. Five-point-four to the exchange zone, just go, don’t look at your watch if you haven’t seen any markers, what’s the point?

When one appeared at mile four, what appeared on my watch said fast. When another appeared at five, what appeared on my watch said personal best by a quarter minute over this summer’s run at Carver. With another point-four-one to go, it wasn’t a five-miler, so I’ll call it a “distance class” personal best, the second new mark in two races. And to sweeten it, on this day I took the check-mark in the EJ Rivalry column. It’s all good, save a bit of a muscle strain from that Scoobie Doo start, or the poor warm-up, or both.

But the day’s fun was not yet done, indeed, only beginning, this being a relay. For the next couple of hours we did the relay-logistics thing, barely making it in time for the shortest leg, embarking on a wild goose chase for rocket fuel for our anchor man, and generally enjoying the fact that everyone on our team turned in smokin’ performances. Two hours forty-six after the brick dropped, our caffeine-fueled fifth man crossed the line sealing up a solid second-place finish among twenty-four teams in our co-ed masters division and winning us a coveted brick. Yes, like the device that starts the race, the trophies here are also made from antique mill bricks. It’s just so appropriate.

Chalk up another New England classic, clearly on the bucket list of must-do races, worth every minute invested. Add to that another personal best, and I’m itchin’ for Chapter Four, Kentucky here we come.
Posted by Gary Cattarin at 10:57 PM