Seeing as it is National Condiment Day, I’ll try to catch up (get it, catsup, or ketchup as you wish) with recent events over the next few evenings. It’s been a busy stretch with two races in five days and lots more to come in the very near future, so prepare yourself for an blog-o-rific onslaught. And no, it’s not really National Condiment Day; I just invented that for literary fun, though I relish the thought of such an event. (Groan.)

Let’s start this evening with Chapter One, Return of the Jedi, in which our intrepid Greater Boston squad once again travelled west to Westfield, Massachusetts (which would seem odd if we lived further west and had to travel east to Westfield, but I digress…) for another round on the Stanley Park course. We’ll move on to Chapter Two in a couple of nights.

Having had less than a stellar outing there four weeks earlier, this was a Douglas MacArthur moment (“I will return!”), returning to Westfield seeking vindication after an enjoyable but mediocre race a month prior. This time the old-fashioned butt-kicking I’d tasted four weeks earlier by running in an open-age race (there being no masters event that day) would be replaced by an old-fashioned butt-kicking of racing in a masters race, but one comprised of New England’s best, this round being the USA Track & Field New England Cross Country Championships. And indeed, place-wise, it was a pretty good butt-kicking, but place aside, I make no complaints about the day, it was essentially all good.

Last time out on the Stanley Park course, irrational exuberance sucked me out with the youngsters, neglecting reason and minor details such as having run a hard twenty-three only a few days earlier. Hitting the mile in five-forty-two wasn’t really a bad thing, but hitting it at that clip feeling entirely out of control of the race certainly was. That day, the rest of the run was a struggle, plain and simple, punctuated by the dual insult of hyper-extending my ankle twice on the same spot on the course – you’d think I’d learn… In the end, ringing up the 8K in a full thirty and a half minutes was nothing to be terribly happy about, though my companions and I didn’t let our respective mediocre races get in the way of being happy about what was otherwise a fun day. Besides, we knew that… We Would Return (thanks, Douglas).

This time, calculated exuberance put me at the mile in an identical five-forty-two, but feeling entirely in control. I voiced some good-natured exasperation about the quick start (at least for me) to the runner next to me in a purely psychological play, and then proceeded to leave him behind. From that point on it was only positive gain, picking off another few places with calculated bursts, losing none, and feeling solid. 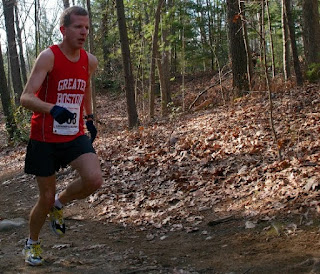 Coming out of the woods for the last time, I’d already taken the relatively easy place gains, and a solid fifty yards separated me from the next pack forward with less than a mile to go. Making the second-to-last turn, one of them inched closer back to me, or me to him, impossible to say, but while I knew I could probably catch him given enough runway, quick mental calculations hinted that there just wasn’t enough race left to do so. I couldn’t help but thinking of Tom Derderian’s history of the Boston Marathon which I’d just finished plodding through (it’s out of print but available used, I happened to read the original edition), in which he describes many years’ races from the perspective of the second-place chaser, gaining on a fading leader late in the race, knowing he could catch and win, but simply running out of race. Now, with Tom himself (coach of our GBTC squad) somewhere behind me in the field, his words came to life, except that rather than conceding to the rapidly vanishing remainder of the course, they lit a spark. With perhaps a hundred yards left to go (pardon me, meters, this was a metric-measured 8K, not a five-miler), and perhaps twenty meters of gap remaining, rationality departed. Why not?

I can’t recall an all-out sprint like the one that erupted from some unknown place within since, well, I just can’t, and that’s not forgetting some of the more memorable all-out sprints. Maybe it was because Darling Spouse and Dearest Daughter the Younger had made the trip, and the alpha-male in me decided to show off. I can’t say why, or how, but ten meters from the line, I picked up one more place, much to the surprise and chagrin of my target. 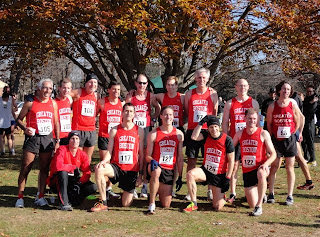 To put this in proper perspective, this wasn’t exactly a case of stealing victory. It merely notched me up from thirty-somethingth to thirty-somethingth-minus-one. And as it happened, finishing eighth on my team, it was entirely meaningless so far as the scoring was concerned, but from a confidence and satisfaction perspective, it was entirely priceless. Not to mention just plain clean fun. More importantly, this time the finish line arrived three quarters of a minute earlier than the month previous, at a hair under six minute pace on the trails, and this only two weeks after Manchester’s hill and wind punishment. No complaints, and scratch the word essentially, it was all good.

No time to bask, though, because Chapter Two lingered a mere five days later. We’ll save that one for the next episode.