You know you’re growing old when phrases that pop into your head turn out to be, upon doing some quick web research, really old. The phrase ‘irrational exuberance’ came to mind regarding recent adventures, even though the context of said adventures had nothing to do with Alan Greenspan’s original economic application of the phrase. What surprised me was to learn that he said it in 1996. And it seems like yesterday. Yikes. 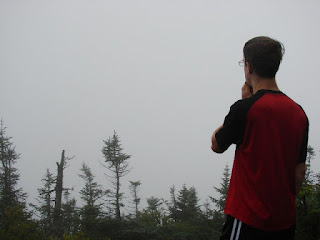 Mr. Greenspan spoke of the growing economic bubble which did indeed collapse in the Perfect Storm of ninety-nine, along with a chunk of my portfolio, not that I fared any worse than the next poor sap working for a certain Canadian telecom company at the time. My application of the phrase would make poor Alan roll in his grave if he were indeed dead, which he is not. I was thinking of the irrationality that put me on top of a seriously obscure mountain in a seriously obscure part of the Adirondacks of New York State, with seriously obscured ability to see anything farther than twenty feet through the fog, not to mention the seriously obscured concept of dryness, long since erased in a mixture of precipitation and sweat, having arrived at this point in my life via a seriously absurd drive for a seriously short getaway, and yet… the exuberance of loving it. If that’s not irrational exuberance, I’m not sure what qualifies. But in this case there was even more to generating the exuberance than simply the mountain. 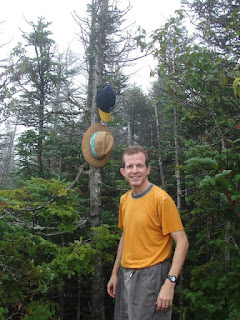 Yes, it’s August again, which often means that in the midst of the summer doldrums, this year’s edition being the slump which I declared some time back and which undeniably continues despite our interruption for a big personal best last month at Carver, yes, it means it’s the time of year to divert my – and your – attention to something other than running for an episode. Mind you, the slump, along with a recent book I’ve had the enjoyment of reading (a review of which will follow shortly), are conspiring to drive an interesting experiment converging the scientific, economic, and social aspects of medicine. But that story has yet to play out, so it will have to wait while we interrupt this blog for a mountain adventure. Or in simple language, running hasn’t been so hot the last couple weeks, so let’s talk about something else.

It was about this time last year when I made a similar divergence from running to the Land of Endless Mud known as the Adirondacks. And so it was also this year. Our neighbors, fortunate to have a place in a little spot of paradise out there, as well as a son who’s a serious mountain addict (there’s no other way to describe a sixteen-year-old who’s now three summits away from completing his Adirondack Forty-Sixers, it’s an addiction and nothing less), yet with nobody within his clan quite foolish enough to try to keep up with his ‘this-really-isn’t-reasonable-in-hiking-boots’ pace, offered me shelter in paradise in exchange for bodily abuse accompanying their lanky young addict. Imported labor, of a sort.

In a repeat of last year’s adventure, Intrepid Young Hiking Partner hand-picked a Death March based on the likelihood that nobody else would be quite stupid enough to accompany him on these needed peaks. This year’s winner: the Seward Range, even further away than last year’s Santanoni Range. The punch line is that sixteen-plus summit- and boot-beaten miles later (oh, to swap those sixteen for twenty in running shoes on roads, the feet would be so happy), Hiking Partner’s list stood at forty three and mine at a measly fifteen. And that’s part of what made this so irrational.

Back in Ninety-Five, I completed my New Hampshire Four-Thousand Footers, a collection of forty-eight summits exceeding the arbitrary mark of a round number based on kernels of corn, or whatever legend you choose to believe about the origins of English measurement. Making the three-hour drive to the White Mountains to pick up lonely wooded summits like the Hancocks made sense, knowing that the place was close enough, and thus my visits could be frequent enough, that reaching that lofty goal was a realistic expectation. But the Adirondack Forty-Sixers? Where it’s a five hour ride just to reach the edge of the range making day hikes impossible, and many summits lie so many hiking miles in that nailing more than one or two on a typical trip is often a serious stretch? And where I get the chance to hike about once a year? The likelihood of my completing this summit list is, in all frankness, slim.

So if I’m going to travel that far – not just five hours to the range, but another hour-plus to the trailhead – why not just do a big dramatic peak with big dramatic views? Why on Earth slog your way up three unremarkable wooded peaks, merely the 24th, 33rd, and 40th highest in the state, all with limited views on a good day (and ours was not a particularly good day), travelling not even on real trails but barely hewn unofficial unmaintained ‘herd paths’ (read: lots of rocks to climb up and down, plenty of wet brush, and mud, mud, mud), and beyond all of this, in the rain… well, you get it. If I’m not likely to ever finish this list of Forty-Sixers, why not just do the good ones?

Well, it’s like those signs that people hold up at marathons. Why run twenty-six-point-two miles? Because twenty-six-point-three would be crazy. Or in short, because this is what we do. Runners run. Hikers hike. The fact that we saw nothing for much of the day due to the fog, and when the fog cleared the furthest we saw was merely to last year’s mud-hole of Couchsechraga, was irrelevant. The joy of the climb. The victories of the summits. The adventure of the descent. The relief of the end of the trail. And on this adventure, the pleasure of like-minded company.

One of the aspects that brings me such enjoyment from running is the runners themselves. Life is, after all, a series of sorting through the chaff to find the gems, including doing so in the people you meet. Finding folks with common ground is what brings us together, builds our community of humanity, reminds us of the good in the world, and energizes us to go on each day. Sounds lofty and perhaps a bit corny, but it’s true. These people don’t have to be life-partner-level matches of perfection, just people that we can connect with on a dimension that matters to us, and enjoy their presence, their experiences, and their energy. 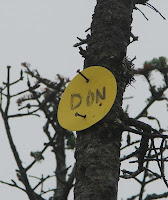 Somewhere between Summit Number One, Mt. Donaldson, and Summit Number Two, Mt. Emmons, Young Intrepid Hiking Partner and I came upon a pair of adventurers on a similar agenda. Young Partner recognized their trail nicknames from various mountain blogs, and the match was made – like-minded adventurers sharing their unlikely presence in such an absurdly obscure locale. Twenty minutes evaporated in animated chatter, interrupting our progress as we were, 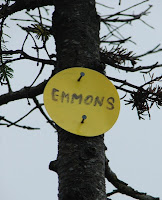 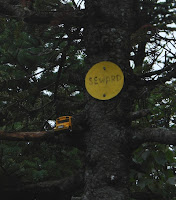 at that point, headed in opposing directions to and from the most distant point on the out-and-back ridge. An hour later, after separating, reaching the far summit, and returning to the first, we’d caught up with them back on Donaldson, and with no consideration of not doing so, formed a posse for the assault on Summit Number Three, Seward Mountain (named after the same Seward of Seward’s Folly, the purchase of Alaska in 1867).

The rest of the day is, as they say, history. Conversation is exponential, and the stories, jokes, and experiences of four rained upon us, replacing the morning’s rain with our own generated sunshine even before the rain really did give way to a rather delightful afternoon that even served up some views of the obscurity within which we dwelt.

Our increased numbers emboldened us to try an alternate path on our descent, one that we’d each previously considered but weren’t quite comfortable of jumping into alone, taking on a route described as, “steep, eroded, and difficult”, and finding the challenge exhilarating among new friends. The experience of the course itself as well as the knowledge that our serendipitous meeting was the catalyst which supplied the confidence to attempt the feat resulted in what we all agreed was a far more interesting circuit that had we simply returned by our inbound route as planned. 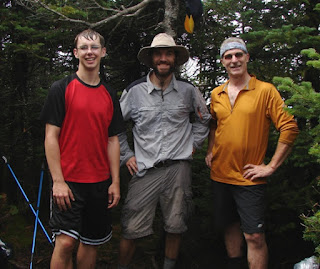 By day’s end, any question of the sanity of this expedition was expunged. The confluence of events required to result in this day was entirely unlikely, the willingness to even embark on such a trek entirely irrational, and our resulting mood, entirely exuberant.

I’ll leave the technical description of the trails, the route, and so on to our newly found companions, a.k.a. “Pathgrinder” and “Scatterbones”, who post on mountain-oriented sites where these details are vital to future adventurers. You’ll find their account, as well as more pictures, at a link to be added here as soon as they’ve posted. Here’s hoping we cross paths again.

And here is the link - it's a great story and worth a read!
http://www.adkhighpeaks.com/forums/showthread.php?t=18690