Be a good boy, always do your homework, and you’ll go far in life, right? Seems like good advice, and it usually is. This time it held true just a little bit too literally, notably on the latter end of that statement. Here’s one time when I wish the dog had eaten my homework. Except, of course, for the minor details that this kind of homework couldn’t be eaten, and that I don’t have a dog.

One week after writing about the hazards of for-profit versus non-profit club racing, I dipped my toe into a for-profit race. As I said, it all comes down to attitude, and I’ve casually known this race producer for some time. He’s local, he’s not Big Corporate, and he’s a runner, so I don’t mind that he does this for a living. Besides, that Groupon-like email with the half-price offer was compelling. Who says I, Joe Frugal, can’t be swayed by a low price? 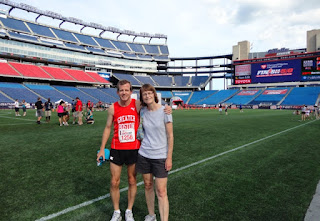 And the event in question is, to be entirely frank, worth a few bucks just for the fun and experience, never mind the racing part. The Harvard Pilgrim Finish-At-The-50 combines the schmaltz of the NFL with the world of running. I’m no big fan of mainstream pro sports, but that’s not to say I don’t enjoy watching the Patriots (when they win, of course), or can’t enjoy the opportunity to play in their sandbox. This race serves that up: the finish consists of racing through the inflatable Patriots football helmet – the one that the team comes through at the start of each game – onto the field of Gillette Stadium, surrounded by its sixty-eight thousand seven hundred and fifty six seats, 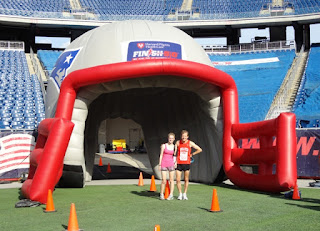 many filled with family and friends, to finish, as the name says, on the fifty-yard line. Never mind that the field is currently set up as a soccer pitch with no yard lines. It’s the same spot, you get the idea. Add some schmaltz, a few Patriots cheerleaders (OK, eye candy, not schmaltz), the Patriot mascot, a real Patriot just for show, put it all on video on the huge stadium screens, and note with glee that your family is sitting in front row, fifty-yard-line seats, a feat never to be repeated, and it is, well, fun. Then add fireworks afterward, and the traffic is, well, legendary.

But the theme today is homework, and how doing it will take you far in life. So let’s back up a day.

This is not a small event. Pre-registrations exceeded five thousand against a stated cap of six thousand which in itself was exceeded. And this is not an elite event. No Boston-like field where eighty percent are qualified and know the ropes for race prep and logistics. No, this is a collection of everyone who finds this football-relation thing interesting, and there are a lot of those, and bless them, they’re not all astute racers. You can expect a lot of people converging on this to run a five kilometer that might not do it again till next year. Fair enough, good for them, but it means that I had no interest in trying to pick up my number in the mayhem of race evening. And as luck would have it, I had a business meeting the previous afternoon just down the road, so I swung into Foxborough, picked up my number, and went out to scope the course, using the map posted on the race website. Doing my homework, like a good boy. 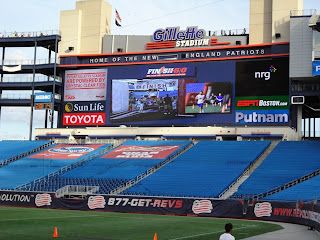 I’ve always been a big proponent on knowing the course ahead of time. I’ve always been a critic of races that don’t post the course map, making the previous virtue difficult to attain. And I’ve seen the results of failing to attain that virtue numerous times, always at someone else’s expense, because, after all, I do my homework.

Which is why after a fast mile one, a disappointing mile two, a realization around mile three that while I’d faded off smokin’ pace and could feel in my bones I’d lost the opportunity to beat the virtual personal best set midway through the Bedford twelve-K, I still had a good shot at an official personal best were I just to hold on. And I knew the course, knew just what to expect, and figured I could do it, because I’d done my homework.

Pulling into the center of Foxborough, the course cut right and then was to cut immediately left. Except it didn’t. Or at least the guys in front of me didn’t; they all went straight ahead, blindly (in my view). I knew the map, I knew the course, and it cut left on Bird. I knew there were no street markings anywhere along the course – because I’d scoped the whole thing – so not seeing one at this turn didn’t worry me. I looked left and saw, one block down, a cop stationed at the next turn onto Baker. Seeing that cop assured me that I knew the course. “Left!” I shouted to the field (who of course ignored me), and made a wide-swinging, very non-tangential, hugely inefficient left turn. Because I did my homework.

And a block later the cop told me they’d changed the course that day.

Now, you can ask, why, if the cop knew that they’d changed the course, was he standing on the old course? Was he that bound to orders? You can also ask, why did they change the course that day? The answer, later research would show, that they changed it two weeks earlier, but never updated the web site, nor apparently the people who’d posted the signs warning locals of road closings, which were duly posted on what was now not the course.

I more than muttered several expletives and momentarily lost my will to live. Then like a pilot coming out of a stall, I re-lit the engines and made the command decision to run the “old” course anyway, knowing that the two roads paralleled, and just see what happened. I had a nagging guilt that if the roads weren’t quite parallel, I could have shorted the “actual” course. Or the other way around, but at least that wouldn’t be guilt. My mental map of the terrain was good, but not that good.

Along Baker Street, between the “road closing” signs, stood a number of perplexed spectators wondering where the race was. For them, I was it. A half mile later the field rejoined me – nobody noticing the guy re-entering the field from the left – and it appeared I slipped in where I’d left off, so I ran it in. Through the tunnel, onto the field, eyes on the clock, despite all this a few seconds to spare, and in the end a six-second personal best recorded – if I didn’t short the course. 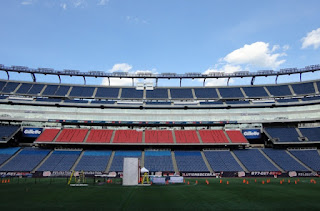 To be fair, finishing on the fifty when you’re really racing is far less relevant than when you’re a big Pats fan and you go for a typical participant’s maybe-just-a-little-harder-than-usual run. Those folks probably got a lot more out of the cool finish than I did, hammering toward a PR, eyes only on the clock once I’d clocked the slow five-K guy who swayed into the ten-K lane inside the narrow stadium-entry tunnel who didn’t move despite course marshal instructions and my warnings (I’d predicted that would happen, serves him right…). But once the race was done, holding après-race on the field at Gillette, with those towering rows of seats looming overhead, was undeniably cool.

A brief discussion with the race director immediately after the finish was more or less meaningless, as I’m certain he couldn’t understand a word I was saying in my post-race stupor, and with over six thousand people descending on his finish line crew, he had more things to think about. I duly reported to the awards booth, picked up my second-place booty for the forties age group, and noted I’d only missed winning it by five seconds. Bummer, ah well. 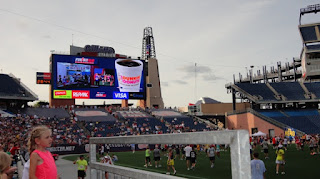 And then I clocked out that little detour the next day. As it turns out, those two streets are indeed parallel, but the street I took to get from the first to the second swung notably south, adding a twentieth of a mile. My guilt was assuaged, I had not shorted the course. I’d gone long, by point-oh-five, which doesn’t sound like much, but at my pace, that cost me a surprising eighteen seconds, not counting the momentary deflation upon learning of the re-route. That five-second gap between me and winning my age group came back to haunt.

We can analyze, understand, learn to avoid these pitfalls in the future, but that’s it. Can’t change it, so laugh, tell the story, and move on. Do your homework and you will go far in life. In my case, a twentieth of a mile too far.
Posted by Gary Cattarin at 5:38 PM