Dad, You're Such a Nerd!

One of the biggest races in my life looms a mere five days away. I’m not nervous, I’m nerdy. At least that’s what Dearest Daughter the Elder said when I told her what I’m about to write here. Frankly, she’s right. I celebrate cerebralism ceremoniously.

That race is the USATF (USA Track & Field, so technically it’s “USA-TF” but I always find myself thinking “US-ATF” and wondering why there aren’t Federal agents knocking on my door looking for booze, smokes, and guns, but I digress…)…right, where was I…USATF National Club Cross Country Championships in the Land of Dampness called Seattle. Where, I note, the weather forecast looks cool, crisp, and fine for Saturday.

I’ve come to grips with my presence at such a lofty event. In recent races I’ve played with the age grading system and the fact hasn’t escaped me that my times, scaled to my lofty age, edge to the high end of the seventies on the performance level percentage scale, where eighty percent is labeled “national class”. So while I haven’t truly hit national class, I’ve come close, and therefore it’s not absurd to show up at a national level meet. But adding the word “championship” to that meet knocks me back to the absurdity classification. On the other hand, subsequently adding the word “club” brings me back into the realm of “the bouncer won’t kick you out at the door, because you came with these other guys”. True, I am “B Team” relative to the level of the top performers on the Greater Boston Track Club Masters team, but the fact is that I’m ready, willing, and able to travel to be a part of the team, filling out the fifth man spot, and fifth man is just as important as first man when it comes to cross country scoring. My job is simple: run my heart out.

That settled, I’m just hoping that my heart isn’t constrained by some of the other achy bits of late; the right hamstring, the left hip, the left knee, all complaining a little of late, but when is there a time when something isn’t complaining? It’s called age, and we deal with it. Last week I hit the track with local training partner Issam to hammer out mile repeats, and the results were encouraging. My target then was simple: make six minute miles feel comfortable, because my goal in Seattle is to string something close to six of them together, which would deliver a ten kilometer personal best by far and hopefully a decent placing for Team GBTC.

Uh, yeah, that’s ten kilometers for this race. Up till a few days ago, I’d thought it was eight, like the New England cross country championships. Suddenly I figured that out. Not that I mind at all, longer to me is better, but I did find it a bit embarrassing to be planning to travel all that way and not even know the distance of the race. And on the topic of traveling all that way, we get to the title of tonight’s posting.

It occurred to me the other day whilst clicking off the miles that an amusing irony was hanging out there, just waiting to be identified by the truly obsessive compulsive type that I am. I had an inkling that some numbers were about to line up. On return from my run, I hit the web to test the theory, and sure enough, there it was…

From my doorstep to Jefferson Park, Seattle, site of Saturday’s festivities, as the crow flies, two thousand four hundred and sixty five miles. For those of you seeking the instant replay to verify the call on the field, we can zoom in a bit without giving away too many state secrets to verify this is the actual point to point distance. From my doorstep… 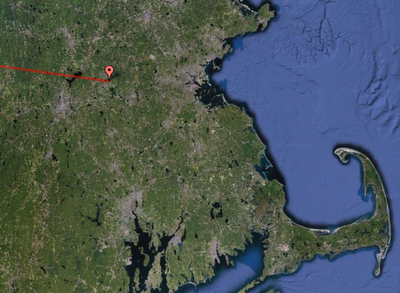 To the starting line in Seattle… 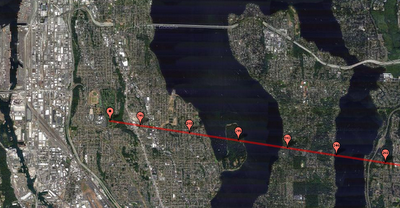 And here’s the nerdy bit. As of this morning, my mileage total for the year is two thousand four hundred and eleven miles. A mere fifty four miles short. Not exact, but pretty darn close. Had I noticed this a week or two back, I could have piled in a few more and made it perfect, but at this point it’s too close to race day and the body needs some rest, so I’ll settle for a few short runs between now and then and end up around thirty miles off. Still pretty close, within a margin of error, close enough to point out the irony. I’ve literally run to Seattle.

Telling Darling Daughter this brought on the title comment. True. Guilty. Nerdy. Proud of it.

But fitting. It’s been a year that’s brought a number of satisfying racing successes and already by far a Second Lap annual mileage record, and barring injury, will shortly bring an all-time record surpassing those youthful days. All of this led up to the call up to the GBTC team, which opened the door to toe the line at a race called National Championship, which I’ve come to grips with but still feel a big “wow” every time it comes through my head. All those miles, about two thousand four hundred and close to sixty five of them… Indeed, this year I’ve run to Seattle.