Running Through the Mud Into the Sunset 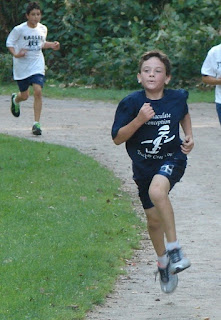 This one is tough to write. When time allows, I dive into this creative hobby of mine. I’m certainly not doing it for fame, considering the vast number of people who don’t read this blog. I’m doing it because I enjoy the writing, enjoy painting pictures with words, sharing the experiences, and to an extent, reliving the experiences. But this one is sad, because the experience has come to a close, and I’ll miss it. For at least this phase of my life, I’ve hung up my cross country coaching hat.

Dearest Daughter the Younger graduates from her small Catholic middle school in the spring, which means that barring an extended period of unemployment or a second stint during retirement, too far away to ponder, this is the last year I’ll be coaching the team. Squeezing it into my personal and professional schedule has been challenging, and just can’t be justified if my kid isn’t on the team. But rewarding? You bet. I will miss these kids and the fun – and honor – of serving them.

Coaching middle school kids in an endeavor that is rooted in personal motivation is an exercise that ranges from frustration to sublimity. These aren’t finely tuned athletes seeking fame and scholarships; they’re smart enough to know there isn’t much of either at this level. 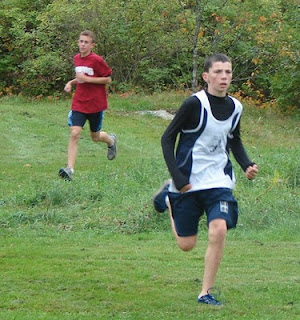 They’re normal kids, good kids, kids who are there in many cases because their friends are there, usually not because of any inherent natural giftedness (though to be fair, I’ve been fortunate to have a few cases of that, too). They’re kids who are motivated enough to get out and do something beyond homework and video games, but not necessarily motivated enough to keep running when behind the trees, out of sight of the coach. They’re not old enough yet to care whether they get 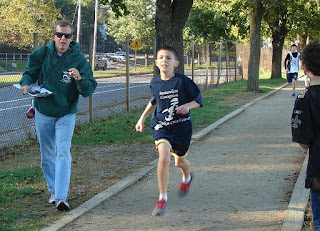 enough exercise even though I talk to them about lifelong fitness, because the health issues of not doing so are still completely foreign to them; they’re on their youthful free ticket.

Despite these challenges, I’ve been honored and overjoyed to have every wonderful one of them. 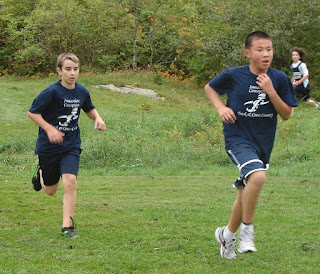 In a school the size of Immaculate Conception, there simply aren’t many fall interscholastic sports choices. In fact, there’s exactly one. So from the kids’ perspective, if they want to do something, it’s cross country or, well, cross country. (To be fair, we don’t live in a desert, there are city-wide soccer programs, karate schools, you name it, but within the school itself…) And from the coach’s perspective, there’s not a large body of students to draw from, so depth is not a word that enters into the equation. Assuring enough runners to score a team in a meet is the primary goal. Speed, endurance, and raw guts are not qualifying characteristics. 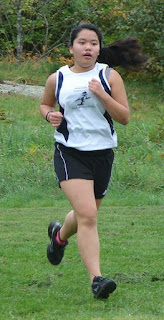 Put these equations together, and you get a team that spans a third of the student body and ranges in talent so diversely that assembling any workout such that the kids are somewhat in sight of each other can be perplexing indeed. Were this high school, I’d send them out for five to ten on the roads, and I’d see them most every day. This is middle school. You can’t send a fifth grader on the roads, you can’t send them far unaccompanied, and you can’t, for that matter, send them far at all. But you’d like to give the older kids a solid workout and maybe, just maybe, prepare the faster ones for some racing success. But you only get to do this a couple of times a week over a short season. 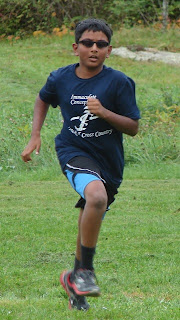 It comes down to changing your criteria of success. Success can’t simply be winning, because our team of seventeen drawn from fifty-some students isn’t real likely to wallop a public school team of forty drawn from a pool of four or eight hundred. Success has to be defined at a personal level.

A few years ago I decided to take up the guitar. I taught myself a little and then signed up for a group lesson at a local school’s adult education program. My instructor would constantly remind us that we weren’t going to play like Eric Clapton. The only thing that mattered, he’d pound into our heads, was whether we were playing better now than we were last week, last month, last year. Measure success on your own scale. Make it personal. 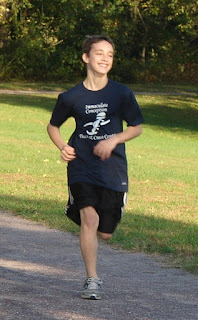 And so I take that message to my charges. Are you stronger, faster, healthier today than you were last week, last month, last year? A little more experienced in the ways of racing? Are you moving ahead? I challenge them at the start of the season. Look where you are now. In our short two-month-long season, where can you be? How do you measure it? Are you aware of your fitness level? What’s your resting heart rate? How far can you run? What’s your race pace?

You’ve’ got two months. Go. And remember, you only get out of this what you put into it. 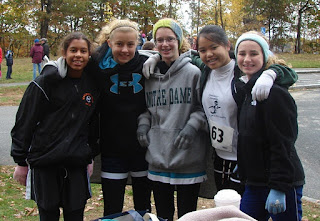 Over the course of the season, they transform. The more gifted runners realize that they really can start running and just keep doing it. I’m a player coach, I’m out there with the kids, even the afternoon after the marathon, I want to show them it’s worth the effort and you can run through the inevitable aches and pains, on good days and bad. 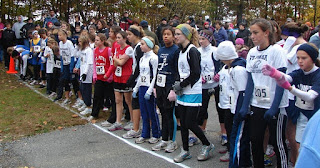 Early on, sending them out for a mile brought groans. Late in the season, some were suggesting we extend our runs. And even the social runners-to-be, who’d stop any chance they found themselves out of sight, discovered the joys of social running, the pack motivation, the mobile coffee klatch as I like to call it, and found themselves running longer than they’d ever expected they would. 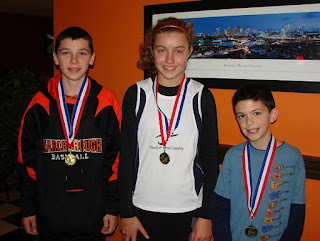 And they all got faster. Relative to themselves. All of them learned how to push just a little harder each time. They learned that racing isn’t always comfortable, indeed, it shouldn’t be, but it’s always rewarding. I’m one who believes that if the message isn’t received, it’s irrelevant, and it’s better received if it is fun, so I gave them some practical and fun race advice: Run the first quarter mile hard, then say, “Oh crap, I’ve got to do this six more times!” Then do it again. And again. And they loved it, and they did it.

Two months later, when we closed our season at the annual Central Massachusetts Catholic Championships, we scored three individual medals and our boys bested three of the seven teams, a best-ever finish for the school, at least in the years of my involvement. We scored numerous race pace personal bests. But more importantly, we scored fitness, fun, pride, and joy. 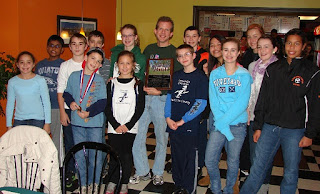 Because the now infamous Northeast October surprise snowstorm was bearing down on us, already pelting us by the time the last race finished, the meet organizers wanted to hand out the medals immediately as runners came through the finish chute to get them home quicker ahead of the weather. I objected, and offered to do the announcing, quickly, for a proper awards ceremony. The shouts of unbridled elation at the calling of each name by the kids from all the schools, not just ours, were alone reward enough for the effort to get our teams to that point. It feels good to contribute to joy. 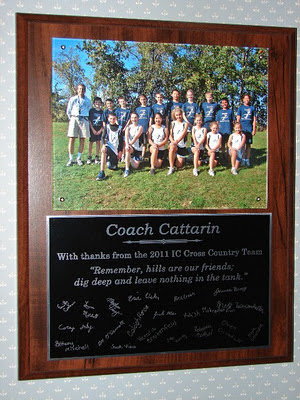 They said thank you to me in a way I didn’t expect and that knocked me flat, by presenting to me a plaque that wasn’t just beautiful, but that let me know they’d actually listened to my coaching mantras. Remember, hills are our friends, dig deep, and leave nothing in the tank. How many times I’d said that, shouted that, screamed that. They told me that they’d heard, and that it mattered. They allowed me the opportunity to leave a stamp on them, and for that I am honored and forever grateful.

How do you say goodbye to that? 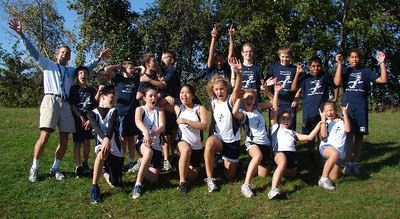