Let’s cover the important stuff first. Chris, my counterpart in the lunacy of Run Marlborough 2011, has signed on as a follower of my blog. Not that it really means anything, but it’s symbolic, because that makes ten. DOUBLE DIGITS BABY! I can smell that book deal in the works… If I could figure out how to do same to hers, I would, but I don’t think she counts kills the same way – at least those that are not squirrels.

Now, about that Run Marlborough 2011 quest? Finite. Completum. El Dunno (La Dunna?). With family, a few friends, and Mayor Stevens on hand to greet and congratulate us, plus the 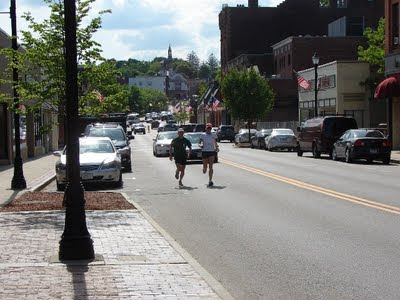 lion’s share of Marlborough’s press corps, we sauntered into downtown, cameras whizzing, much to the confusion of motorists blatantly obstructed. OK, no police escort. No worries. After two hundred and eight – point six – unique miles amidst over nine hundred miles logged to date this year, I can handle a little traffic.

And it was a perfect day to wrap it up. The rains, the cold, the misery of recent days magically parted, replaced by a glorious spring day. After trotting carefully on mildly wounded ankle to our designated meeting spot (to which Chris drove! ..the horror…OK, she’d already done her workout), we found ourselves ahead of our designated schedule and thus wandered a bit, checking off a few roads still left on Chris’s shrinking list. From there, it was all downhill to the last half unrun block, that block I’d worked so hard to avoid the last five months, to our ceremonial finish in front of City Hall. 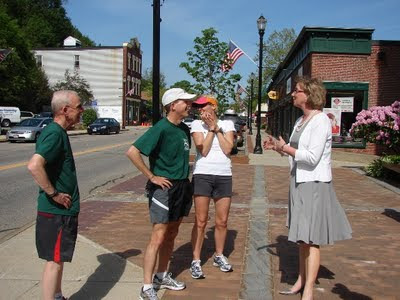 Goofy? You bet. Media mongers? Maybe we were. But was it fun? Absolutely. It was something we’ll look back on and blubber about to our grand-offspring, if they’ll stop texting long enough to listen. Now, I think this is where I say I’d like to thank my wife, my family, all the members of the academy, and so on…

Mayor Stevens lamented that had she known of the beforehand, we would have been deputized as a road survey crew. Truth is, I told her, the city does a pretty good job on the roads. Truth is, I’m of the view that she’s done a pretty good job on the city, and I’m sad to see her leave at the end of her term. But time moves on, and so must we, so the natural question was of course, where to run the next day?

For the record, I ran to the bank to deposit the only money I’ve ever made running, the small stipend paid for being part of that cool Boston Marathon study. I guess this means that after our moment of triumph, I turned pro. Sold out. Went commercial. Yeah, I can only wish, I don’t hear the phone ringing with sponsorship deals.

The media? Front page on the Metro West Daily News (yawn, again?) in another masterfully crafted piece by fellow runner reporter Paul. And a feature on local cable TV channel WMCT, watch the video here. When you know these things are coming, there’s a big cringe factor, hoping they won’t latch onto something stupid you said. Both pieces, I’m pleased and relieved to say, made me smile cringelessly. And let’s not forget Chris’ blog post, also worth a read.

Next up, the gun fires in a mere fifteen hours on the Buffalo Marathon, as I write from uncle’s back porch on what would be a lovely day for almost everything but running a marathon. What a difference a few hours make! Traveling westward yesterday, the trusty Prius temperature thingy recorded NINETY ONE DEGREES passing Albany, and FIFTY TWO DEGREES passing Rochester a few hours later. This morning dawned cool and foggy, ideal for an endurance event, but said event wasn’t this morning. Already today it’s turned summer. And tomorrow? Too warm, too humid, and probably rainy enough to wet and chaff the toes and pointy bits. Probably not a day for hammering it out the gate, but once we’re off, so are all bets.
Posted by Gary Cattarin at 4:37 PM