Not Alone in the Universe 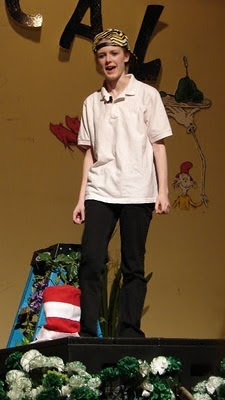 our household this week as my darling daughter, elder edition, took the stage in a principle role in her high school’s production of the musical Seussical. My baby belted to a full house the duet Alone In the Universe in front of unspeakably proud parents (the link is a generic rendition, no recording allowed at her show). On today’s eleven plus miler, I couldn’t get that tune out of my head. Alone in the Universe. Except that a couple hours later, I found out I’m not.

I already knew that one of my club buddies has taken up the challenge since I more or less goaded him into it on New Year’s Day, but he’s more on the quiet side, not prone to public ramblings like that which you currently read. And I feel somewhat responsible for his burden, which I think he’s enjoying but if he’s not, that old Catholic guilt is ready to step in on me. What have I done to him?

No, more fun than that is I’ve discovered there is another here in my city engaged on the same quest entirely of her own volition. Crazy as I without my coaxing. Kin, perhaps.

Another club-mate dropped me a note recently that a reporter from the local daily had called her, knowing that she was in the know about local running goings-on. Did she know about some lady he’d heard was seeking to run every road in Marlborough? Well, no, she did not, but she knew of my quest, and set up the contact. Now, I’d just been in touch with a different reporter from that same paper for their annual Boston Marathon participant gallery, and they’d just sent a photographer to my house this morning to get a shot for said feature, when their other reporter rang me up about the Run Marlborough quest. This is getting amusing…

Truth be told, right up to the point when the (Run Marlborough) reporter called me today, I figured this was a case of mistaken gender identity (not too uncommon, this is, after all, Massachusetts). A skinny winter runner in tights, unidentifiable in cozy running top, warm hat or balaclava, shades, the works, effectively with no skin exposed, and often with voice croaky from the cold on top of that, well, I wouldn’t feel insulted if someone checked the wrong box on the runner sighting survey that day. It happens. It doesn’t affect my manliness. I swear.

(OK, I admit that such a mistake by a matronly waitress when I was a teenager prompted me to grow the dumbest looking mustache you’ve ever seen, ruin many otherwise decent photographic images, and probably pushed my chances of mating out five years, but I’m over that and it worked out in the end. So enough of that.)

But no, the reporter told me, there really is such a person, and she too has a web presence to document her dingy doings. Sound familiar?

This is just too cool.

OK, so a quick check of her web site shows that she counts roads whereas I count miles, she uses a Garmin while I’m a bit of a purist with a plain old watch, but she goes low-tech and marks her paper map with a highlighter while I have a twenty minute Microsoft Paint arts & crafts session after each run to update my online version. And a little web sleuthing turns up the ultimate irony that she works for my company’s arch-rival. Yeah, so what, this is running, not work, I can deal with that, though we may have to fight about inclusion of the –ugh on the end of Marlborough. Anyway, this is just too cool.

Said reporter promises to set up a meeting so we can compare notes on our irrational drives and he can document to the world our wacky motivating missions. Should be fun, stay tuned.

Meanwhile, how about that quest? Well, I’m having a grand time. To date, I’ve covered one hundred forty-five “unique” miles in the city and counting (out of four hundred forty total since January 1). I still can’t tell you what percentage that is toward completion, nor do I really care. I pondered calling the DPW to ask just how big a challenge this was but decided I’d rather just run. I’m guessing a good two-thirds, distance wise, but there are enough odd segments in enough odd places that I can still see adventurous roaming in my future for some time. So far I haven’t taken a run within the city limits this year that hasn’t included some new ground, but it is getting tougher as the map fills up. And that map to date looks like… 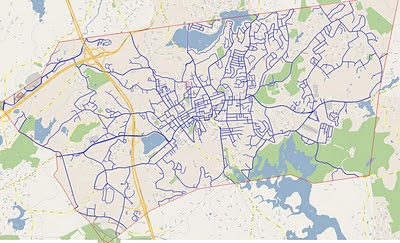 My methodology hasn’t changed. Every run must be anchored at home, either starting, finishing, or both. That was easy early on, now it’s getting tougher not just because of the logistics of reaching various parts of the city, but remembering where to go to hit the day’s target roads when I get there, and remembering what I have and haven’t covered when my route invariably changes along the way. When you get home, chart your course, and realized you were miles away and missed one small cul-de-sac, so you have to go back, well, you get the idea. More fun.

This also requires complete recollection of where I’ve gone – without that GPS remember – which is usually pretty easy despite the many dead-ends and odd turns. My mind just works that way, somehow. Though the other day I did have a lapse and couldn’t for the life of me remember whether I’d turned down a certain cul-de-sac. Irony of irony, that road was (I swear I am not making this up,) Memory Lane.
Posted by Gary Cattarin at 9:54 PM