[ Ed. Note: Yes, it’s another marathon-length marathon story. They are marathons, after all, right? If I could endure the race, you can endure the article! ]

My club-mate Bill (photo at the end), who lit me up on the forty-dollar New Hampshire Marathon, and whom I can blame for this whole adventure (or better, thank), described my participation in this race as a “walk-on marathon”. I think he got it right, so long as I add, “walk lots” as well.

Admittedly, I was ridiculously casual about this race. It’s not like I’m not in shape compared to the general populace, but I certainly wasn’t in shape for a marathon, at least not what I consider marathon shape. But I really didn’t worry about it. After all, after my summer of injuries, I wasn’t going to do a marathon this fall anyway. Then, enter Bill’s idea of the forty-dollar marathon, which to me was an easy price to pay for the motivation that a looming race will bring. If you don’t run, if you lose it, who cares? Forty bucks! 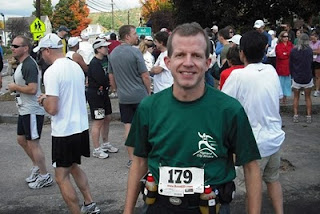 As for the motivation, it worked. But my body got in the way of consummating that motivation. This was a crash training program if ever there was one, and in the end, I crashed. After putting in a seventeen miler of only moderate strength a few weeks back, I knew I needed another long one, twenty minimum, twenty two preferred, to be anywhere close to ready. Instead, I spent the last two weeks barely running, save that sweet win at the Forrest 5K and some light workouts with the cross country team I coach, rather certain that I had at least half of a stress fracture. No long run, no certainty that things wouldn’t go snap, crackle, pop at some point. Now there’s a way to head into a marathon. What, are you crazy?

Well, yes, of course, but not that crazy. Those two weeks of rest gave me some relief from the pain and a reasonable confidence that my skeletal structure would hold up. So since I really didn’t care how fast or slow I ran the race (which is what I said publicly, but to an obsessive like me, that’s a bald-face lie; suffice to say this was as close as I could get to not caring), off I went to Bristol, New Hampshire for the fun. When asked my goal for the race, I simply answered, “Finish without anything breaking.” Simple goal. Walk on. Run marathon. Return in one piece.

After days of the remnants of a tropical storm passing through, Saturday dawned utterly gorgeous; brilliant sunshine, crisp air around fifty degrees, even a few bits of foliage not stripped from the trees by the passing storm. Gorgeous yes, but not perfect. Windy as all get up. Wicked windy. Nasty windy. And that ingredient, mixed with a wonderfully hilly course and my astoundingly fabulous training regimen, this walk-on marathon turned into one of the toughest I’ve run.

I’ll jump ahead here and tell you I loved this race. I love small town races in general. I love the attention from the staff from the race director on down, the casual atmosphere, the easy logistics. The folks working the finish line, med tent, and goodie table afterwards were all wonderful. The one-man band belting out Sweet Home Chicago as I was recovering from the finish line woozies – and though being helped to walk it off by a staffer, able to dance and sing along enough to give everyone a good laugh – was a perfect ending treat. And the folks at the water table at Shackett’s Market at mile twenty three, where I simply had to return afterward to bring home some famous homemade donuts to the home clan, were a joy to chat with. My thanks go out to all of them.

I say this ahead of time so you know that I’m not grousing about the imperfections. They come with the territory in small town races, and you accept them and enjoy anyway. And a typical imperfection – inconsistent mileposts – surfaced quickly. Sure, it was a hilly course, and yes, as noted, the wind was wicked and wild, but the variations that kept popping up on my mile splits were pretty hard to correlate to course conditions, which meant that I really wasn’t sure what I was running, whether I was being foolish, dog-slow, or what 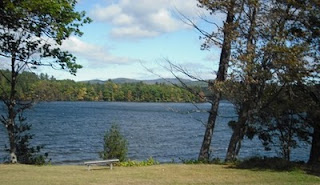 was really happening to my pace in the high miles with splits all over the map (see chart). Not that it really mattered, but it made it more interesting, more mysterious. And my suspicion was verified in the second half, where I found the distance between the half-marathon mileposts (which started out near the turnaround point) and the full marathon mileposts, which should have been a consistent tenth of a mile, varied considerably. Small town race. Loved it. Enjoy anyway.

To appreciate this adventure you have to visualize the course. It starts with two miles uphill, rising north out of Bristol, and continues north up the east side of Newfound Lake. There are plenty of sweet views across this gem of a lake, but few views of flatness other than the surface of the water. At eight and a half, it leaves the main road to cut west across the northern edge of the lake, and in doing so traverses the hilliest section, a series of jolts that include some Franconia-style painful downhills. Passing through a spot that can only evoke the word, “lovely”, Hebron Common, it hits an out & back to Sculpted Rocks, a cool geological oddity which we checked out on our drive-the-course tour back in August. Passing through Hebron again, one is treated to another significant collection of hills heading south along the west side of the lake before closing the loop and re-connecting to the outbound route to drop the last two miles back into Bristol.

Now apply that to the day at hand. Hills, hills, and more hills, and a stiff wind from the northwest. Nine miles north, a preponderance of uphill, and entirely into the wind. Despite per-mile variations induced by unpredictable mileposts, on average running sevens, not wicked fast, but not bad considering my awful training, quasi-injured state, and the conditions. The wind, the incessant wind. I’m churning north, longing for the turn, thinking I’ll be out of the wind…

Now, the astute among you are saying, “But wait a minute, you said it was a stiff wind out of the northwest, and you told me the course turned to the west.”

You’re smarter than I was. For some reason I was convinced that once we turned off the main drag, we’d be out of the wind. No accounting for lack of brains here. Maybe it was those pesky endorphins interfering with logic? In any event, we turned off at eignt-point-something, and turned west, smack into the wind again.

I should make a minor correction here. When I say we turned off, I’m exaggerating a bit. This was a small race, two hundred forty, and the lead ranks were sparse. Translation: It was a lonely race. After a couple of brief stints with companions in the early miles, by seven or so it was me, the howl of the wind, and an occasional spectator. I was in tenth place, and in tenth I would stay until seventeen. If not for the out & back section, where I got a view of the nine in front and a good deal of the field behind, it would have been lonelier still. 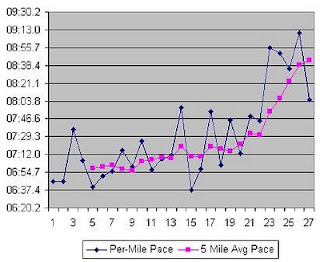 Thus followed a headwind struggle clear to the turnaround at Sculpted Rocks, fourteen miles in. And mile fourteen tossed in a nasty climb, to boot. But once the turn was made, watch out! Downhill, downwind, down went the pace. Man, those folks running the half marathon, which started up near the turnaround spot, had a heck of a day with a full-race-long windy kick in the pants. But of course I wasn’t running the half. Life just isn’t fair sometimes.

The wind carried me into the high teens, and then it was pretty much over. Having not run more than seventeen since Boston, it was pretty much a foregone conclusion what would happen. I was just pleased it held off as long as it did; after all, my calves had been threatening to cramp since ten. Before I hit eighteen, the fatigue set in and I started taking 40-second walk breaks, which surprisingly didn’t balloon my pace that badly, as I was still making good steam while running. Knowing the last two miles were downhill to Bristol, I told myself it was only a race to twenty four, then a free ride. By twenty three, the walk breaks stretched to 60-seconds and the miles came agonizingly slower, bursting over the eight-minute barrier, pushing nines. Twenty four finally arrived, and the downhill began, 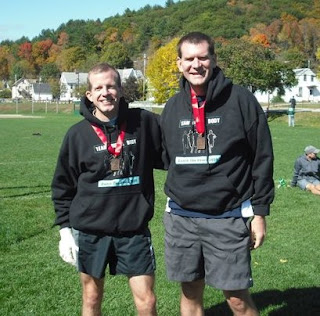 but cruelly brought little relief. Twenty six needed two walk breaks, the second coming when the woozies hit. After Wineglass, I simply don’t play games with the woozies. So what if a mile goes over nine? Beats a broken nose.

How is it we marathoners can endure such agony and leave with such great memories? There’s no denying that the last thirty minutes, no, perhaps even the last forty-five minutes of this race were awful. But I loved this race.

Somehow despite the extended eight-mile-long mighty struggle phase, I managed to lose only four places, landing fourteenth, and fourth master, though since the first master was second overall and took a top-three award, I scored the third-place master spot. Walk on, medal, go figure. And so marathon number twelve is in the books. Of my twelve, this was my fourth slowest at 3:15:56, but completely satisfying nonetheless. It wasn’t pretty; indeed, it was downright ugly in the high miles, but I walked on and turned in a Boston qualifier for 2012 (with fifteen minutes to spare, in case they tighten the requirements), taking the pressure off for next year.

And the funny thing is that the leg about which I was so worried never spoke up throughout the entire race, not even in the ugly high miles where all efforts at holding any sort of form degraded to total junk. It never hurt a whit after the race. A couple of days later I can feel it a bit, but it really does feel better than before (though yes, I will rest it now). Apparently medical science has found a new cure for injuries. Beat them silly.
Posted by Gary Cattarin at 11:24 PM