Quest for the Quahog

In what’s become an annual event for my club, but was a first for me, we spent the weekend on Cape Cod at the Hyannis Marathon and Relays. Hitting this event en masse as a club multiplied the fun, even when punctuated by the self-induced pain of some hard racing, and best of all we came home with a bunch of the coveted Quahogs!

Being involved with a group of runners opens doors to more adventures. There are some things you just can’t do by yourself. Get your mind out of the gutter and think relay team. It would have been easy to slip down to the Cape and pop into the half marathon – almost a non-interrupting event on the training continuum – or even the full, and it would have been a good time. Either would have been great training for Boston. No logistics, no hassles, just go and run. Yeah, but… 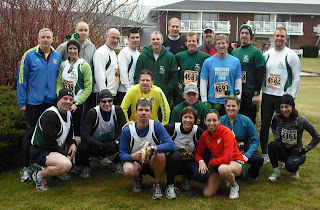 Instead, our tiny club of perhaps 45 people descended on Hyannis with about half our membership and made it an event. Our four marathon relay teams and half-dozen individual runners gave it the feel of walking into the opening ceremonies of the games with your countrymen. Representing the Republic of Marlborough-Hudson, the Highland City Striders! The NBC commentator would make some pithy statements about our city, perhaps about that famed bell we stole a hundred plus years ago (and refuse to give back) and they’d cut to a vignette on one of our athletes, then off to another cell phone commercial. OK, I exaggerate a bit, but every time you turned around, there were our peeps. We had presence. Heck, we even supplied the diva – one of our running wives who sang the national anthem before the start. It was undeniably empowering.

The Hyannis races are held at the tail end of winter when nothing else is even breathing on the Cape. I’m sure that cuts the rent on the host hotel facilities, but it also assures plenty of undistracted volunteer attention. They pull off a fine event. There’s a small expo in a big room which later turns into a big post-race feed ‘em and read ‘em their winnings center, and they bring in a few legends like Bill Rodgers and Frank Shorter to make it interesting. Between the full, the half, the relay, and the 10K, over 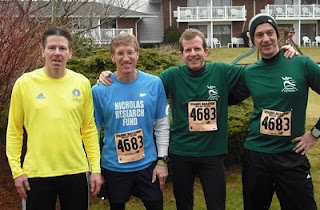 4,000 runners take part, yet somehow I got lucky and found Mrs. Foot Doctor – remember Doctor Foot Doctor? – yes, his wife was running the half, and I’d hoped to meet her – without even trying. It’s homey like that somehow.

Our men’s masters team consisted of a fast guy – none other than Rocket John, a fairly fast guy – yours truly, a reasonably quick guy – Dan, and a not terribly fast – but not all that slow – guy, Dave. While the overall event is large, there aren’t a whole lot of men’s masters teams in the event. We knew our chances probably depended more on who did or didn’t show up rather than any seconds we could shave on the course. But that didn’t stop us from wanting to crank out whatever we could. 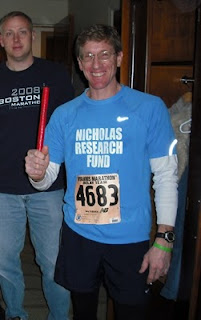 To make it more interesting, our club set a challenge between our teams: they who came closest to their predicted time would win a round paid for by the team furthest off. I queried our team for their expected paces, and calculated a prediction of 3:03:49. But, often hassled for being a bit too obsessed, I decided to relax the precision a bit, figured adrenaline would give us those 49 seconds, and publicly proclaimed 3:03 flat. Remember that bit!

Race day was typically baffling for New England. The forecast? Ugly. The reality? Not bad, indeed, quite pleasant, surprisingly precipitation free. But knowing the course headed to the sea, I anticipated wind and cold, and layered up a bit. When my third leg finally came about, the wind did kick up, but not where expected. And it wasn’t that cold. Go figure. But the bigger baffling wildcard was that I told my team I’d crank out my 7.3 mile leg at 6:25 pace, based on recent races. It occurred to me later that I’d never tried to hold that pace without others around me also holding that pace. With our not-terribly-fast-but-not-terribly-slow guy taking leg two, I realized I’d take the baton amidst a place in the pack where the average pace was a good minute slower. 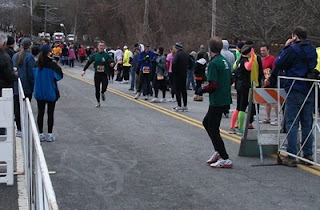 I’d have to push for that predicted pace unassisted, something I’d never done before. You can think about this stuff for only so long, then time takes no prisoners and it’s time to go. Dave ambled in and it was off to the races, baton in hand, ready for some Tonya Harding action if the need arose.

If I had one criticism of the event, 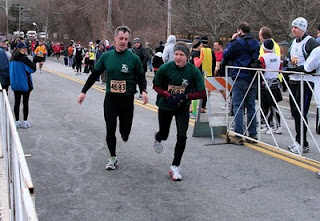 it was that the splits weren’t well marked. And that was the one thing I really needed in my pace-doubting state-of-mind. Being a half-marathon-length two-lap course and starting my leg at the half-marathon point going into the second lap (appropriate, eh?), one would expect to see mile 14, then mile 1 a tenth further on, and so forth. But mileposts 14 & 1 were nowhere to be seen. Markers 15 & 2 did appear, about, oh, say, about yay far apart as expected, but 17 & 4 (yes, 16 & 3 were also AWOL) were a very different distance apart. As were 19 & 6. So while my split from 2 to 4 was reassuring in absolute terms, I certainly wasn’t confident it was anywhere near accurate.

So what? Just run. It was a seven and a third mile sprint, which for me is not my forte. But the number of people we had “in theatre”, on top of the manner on which the course loops on itself offered a constant stream of teammate and friend encounters with constant shouts of encouragement – more than I’d ever heard in any one race. And the scenery bordered on sublime, past Hyannis’ inner harbor, out to the sea, lighthouses, beach homes, the Kennedys’ neighborhood, it’s all good. Finally, the last bend appeared before the long stretch to the exchange zone at Crane’s Beach, and I could see Rocket John ahead. I thought he was going to pace me in, but when he saw me, he turned tail and flew off to warn our fourth leg of my arrival. I was momentarily demotivated, but, being a big boy, I figured it out and got over it. Into the exchange zone, almost fell over Dan, and done. At 6:20, ahead of my pace. Woo hoo!

After a few minutes’ recovery, Rocket John and I decided to finish the half-marathon loop and run it back in. We quickly gave up trying to explain ourselves to onlookers as we cruised by looking chipper while those around us were slugging 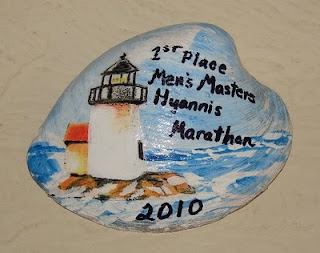 through the high miles. Having not found Dan dead and sprawled out on the course, we figured he’d done just fine on his leg, and he did – he too beat his forecast pace, and when the damage was tallied, we took home the coveted hand-painted quahog shell trophies that Hyannis is famous for. Even sweeter, I chanced across Bill Rodgers in the hotel as another team of relay winners asked him to sign their clams. I’m not real big on autographs, I mean, what do you really do with a piece of paper with someone’s name on it? But having the greatest runner ever (at least in my book) sign your trophy – well, that was simply way too sweet. A thrill I’d waited for since, oh, age 17 or so.

All this left but one order of business – that intra-club challenge, and a lesson to be learned. If you recall, I’d calculated 3:03:49, but dropped it to 3:03 to be simple. Dan crossed the line in 3:04:05. While being a minute-five off was nothing too shaggy, had I stuck to my engineering accuracy, we would have missed by a mere sixteen seconds! Sixteen seconds, I tell you! Now, our Clydesdales are claiming victory with a mere TWO second gap between prediction and actual, but that’s only if they use the gun time, not the official net time, by which we’ve got ‘em whupped. A protest has been filed with the IOC judges...stay tuned!
Posted by Gary Cattarin at 11:38 PM