Ed Note: Yep, this is a long one. Deal with it.

Winter arrived a bit early in New England this year – nearly a foot of it in early December with more following soon after. But since then it’s been light going. No matter. Whenever the snows fall, I’m reminded of a wonderful memory – a summer memory – from those First Lap days, through an odd running leftover.

We race and we collect countless mementos: t-shirts, jackets, medals, hats, you name it. After a while they proliferate so prodigiously we have to figure out what to do with them. Mini-industries have sprung up to sell you Stuff Management Systems, and running is no exception. My medals hang on old unused curtain swag hooks in my office, so no, I haven’t invested in the medal racks for sale in the back of the running magazines.

I’ve still got a box of ribbons and trophies from those high school days, as well as a couple of binders of newspaper clippings. They could make an interesting topic some day, but not now. I’ve got snapshots of me well into my twenties, still sporting race t-shirts from those days. But eventually, all the clothing faded out, wore out, yellowed, shrunk, waxed the car, or simply vanished – except for one item. 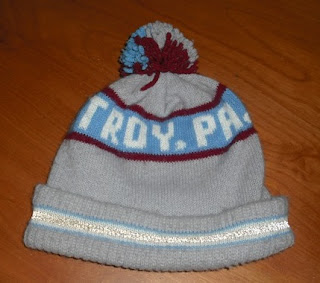 Deep in the basement hangs my ‘shoveling clothing’: an old jacket, battered pair of gloves, and a hat, all of which live near the garage door, ready to go to battle and be abused by the New England weather when it’s driveway clearing time. (No, I don’t own a snow blower, nor, for that matter, a lawn tractor, or even a self-propelled mower. Indeed, most of the time I use a human-powered squirrel-cage-style push mower. Call me stubborn. I’m like that. It’s highly correlated with the running mentality. Not that I complain when the neighbors help out with their snow machines. Well, I do when there’s only two inches of the stuff and, well, I digress…) Back to that shoveling hat. Stitched into its very being the words, “TROY PA”, along with a zillion little reflective fibers, and therein lies a story. That hat is a relic of the last race of my First Lap days. A fond memory indeed. 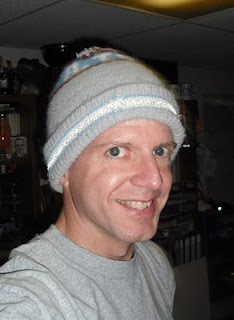 When the idea of telling the story of the hat came to mind, it took me a while to figure out when the event actually happened. There’s a running joke (no pun intended) in my household that in my memories of youth, everything happened in 1972. In reality, it didn’t. And in my memories of First Lap running, everything happened in high school. Again, in reality, it didn’t. But running records beyond those days are sparse, and it took some hunting to track down the details.

After my high school running days came my near-death experience with meningitis, then off to college in Troy. That is, Troy, New York, home of dear old Rensselaer, more popularly known as RPI, a famed engineering school where, as the old overused saying goes, the men are men, the women are men, and the sheep are scared. I suspect the pickin’s still aren’t prime, but likely aren’t as sparse these days as back then. But again, I digress.

I’d planned to run cross country for the college, but found that in my weakened post-illness days, I just couldn’t do it. It took a good six months to regain full strength, by which time my running fitness had faded into the haze of college life. And college life at RPI was inexorably linked to the identity of Troy, a once-great city of tremendous history, but clearly past its prime. Being a history buff, I liked the place, but then, I wasn’t your typical engineering student. Most others didn’t.

I still ran a bit, here and there. Call it the Fall of the First Lap. My scattered logs from those days show some weak attempts to regain the discipline I once had. I never truly succeeded, but I hadn’t yet given up on the concept. Home for my first summer, my running friends invited me to accompany them to an out-of-town race, in – of all places – Troy. But not my Troy, this was another one in Pennsylvania. To a geeky engineering student for whom the very name Troy invoked strong emotions, that was just too much fun to resist.

Troy is a tiny town in north central Pennsylvania that you won’t find on Google Maps, which oddly points you to the wrong place. Indeed, if you want to find it, search for Columbia Cross Roads and look a few miles south. Then, like now, big events in tiny towns are often the finest events around, period. In a town like Troy, an event like this is THE event, and everyone pulls hard to pull it off. In my memory, they did a grand job. It was one of the finest run races I remember from those days. 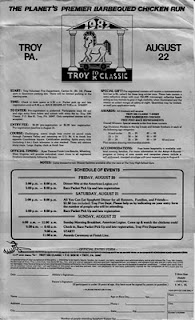 I dug through my scrapbook of running memorabilia and eventually found materials from the race in the later stuff that I’d never organized. There it was, the race application (an extra, I presume) and the course map. And what fun to review! We may have computerized scoring and all that jazz now, but in reality, our sport hasn’t changed. It’s pure, in a way.

Reading the application brought nothing but smiles. Five bucks to register, which included all the swag. Small town event touting “Large display clock at finish line”, which, considering my club’s recent acquisition, I know why they were proud. Night-before pasta dinner for $3.50. And best of all, local families willing to host visiting runners – for free. You’ve gotta’ love small towns.

But reviewing this bit of memorabilia, one item stood out. There it was… the SPECIAL GIFT! For pre-registered runners, a commemorative knit hat (a $5 value!) with a – I’m not making this up – “retro reflective stripe” (retro in the ‘80’s, consider that…) with over (count ‘em!) 750,000 microscopic reflective beads yada yada yada. Now, ignoring the slight silliness of giving out a winter cap at an August race, I must say that was one of the better five dollar bills I ever spent. 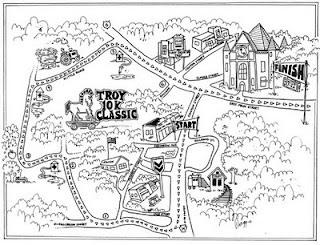 Twenty eight years later those microscopic reflective beads have yet to allow a snowplow to cream me as I shovel late into the night. That hat is a true survivor, and a constant reminder of those old glory days. Even if my performance in that race was pretty average.

The race itself? Re-reading my log twenty eight years later, things haven’t changed much. Like I said, this sport is pure. I usually feel pretty beat up when pushing race pace today, and, no surprise, I did then, too. My log is a litany of complaints. The net result – 6:10 pace, isn’t far from what I’m running today – 6:16 at the Freezer Five (miler) earlier this month. Things haven’t changed much, and being 30 years older now, I can sure be thankful for that. Though one thing that has changed is that unlike those college days, I’m a bit more dedicated now and would be highly disappointed in a 24 mile week, which in those college-distracted days was a peak. 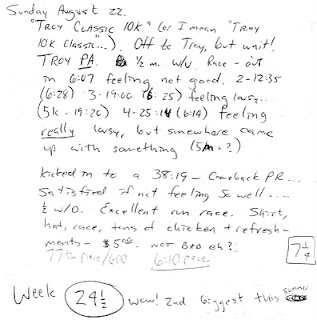 But the best part of this race? A chicken barbeque that couldn’t be beat and a nice cold one. Now, I was never much of a drinker then, nor am I much of one today, but nothing beats a cold beer after a race. Trouble was, I was a mere babe of 19. In those days, the drinking age was 18 in my home New York State, but 20 in Pennsylvania. And Pennsylvania was, at least at that time, a blue law state, where alcohol fell somewhere in the range of highly frowned upon to downright criminal on the Christian Sabbath.

But it’s one of those beauties of the running world that because we’re a well-behaved bunch, well, people just tend to look the other way. And so, having collected the biggest plateful of chicken I can ever recall, slammed onto my plate by a guy with rubber gloves pulling out massive handfuls from the 55-gallon drums in which they’d been cooked by the ton, we band of running brothers settled down to a meal that couldn’t be beat, and the beers came out from somewhere unknown, and there we feasted and sucked down a brew. Underage in Pennsylvania (well, at least me). On Sunday morning. On the front lawn of… the police station. Yes, the police station. With the local cops standing on the front porch, watching over us, the looks on their faces screaming, “Oh, if only we could join you.”

And that was it. My next real race wasn’t until 2005, 23 years later. To be sure, I jogged the company 5K a couple of times early in my professional career, but truth be told, I wasn’t a runner then; I was in running remission, not to re-emerge for another couple decades. Troy was really the Last Stand. Fitting that it produced the only relic to survive and bridge my two running eras.

Treasure those mementos for the memories they hold.
Posted by Gary Cattarin at 11:37 PM