There are legends out there amongst us, entirely unknown to us. Then one day we realize just who that person was, we shake our heads and mutter, “Wow.” One of those legends died last month. This weekend, the running community came out to say thanks, in a way, for being who he was.

Larry Olsen was a local legend, a coaching legend, a regional legend, maybe more. I didn’t know him all that well, so I can’t elaborate too much, though plenty was written about him on the tragic occasion of his death. There’s an extensive article on him in Running Times, and many more including the local newspaper, the Boston Globe, and at least for a while, a list of even more links on the home page of the Tri-Valley Front Runners. There’s no point in my repeating the many things these articles have to say; you can – and should – read them for yourself.

A ways back in my porting “Who Knew?” I wrote about how you never know who that person is who just passed you by. I only met Larry once, and he gave me a serious “Who Knew?” moment. It was at the Whitney 5K in Hudson on a hot evening in July of 2008. I had no idea who he was, only that a guy significantly older than me kicked my butt that night. As did four others, but they were all kids save one close to my age. Getting kicked by this senior was, well, like getting kicked.

Then came the cool part of the hot evening. Whether he asked or I asked, I don’t recall, but the net result was that I went for a couple of mile warm-down with this unknown. And I realized that I was in the presence of greatness. He was casual, entirely unpretentious, but told some amazing stories of racing against the greats like Rodgers, of records he held, and so on. What was even more amazing in that he could tell these stories without coming off the slightest bit self-consumed. He was instantly likeable. I left him still not really knowing who he was, but knowing that he was a heck of a runner and obviously had been for a long time. I heard a bit more about him here or there, but thought little more of that evening until early last month when the news came through our club pipeline that Larry had died, collapsed due to a heart attack while running at age 63.

We don’t like to think about that kind of thing happening, but it does. Runners’ World ran an excellent article a few months back exploring the phenomenon of runners collapsing during races, and revealed studies that do show that even we healthy runner nuts are indeed at an increased risk of heart attack while running or racing. But when we’re not running, we’re healthy as hell, and our overall risk, averaged out, is far below the populace as a whole. Yes, running can kill you, but yes, it’s extremely good for you.

Larry died doing what he loved. In a way, that makes the RW article’s point even sweeter. We will all have to go sometime. Most of us would like that sometime to be quick, rather than an agonizing decline. So run your heart out, stay healthy, and yes, you may literally run your heart out. 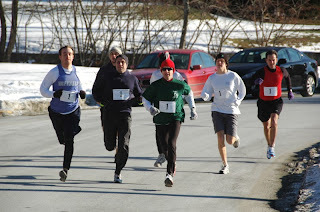 And so Saturday a crowd of perhaps 150 to 200 runners converged on the high school in Hopedale, Massachusetts for a memorial 5K. Technically, it was a fun run rather than a race, which was rather obvious since everyone wore Bib Number 1. But it wouldn’t do Larry honor not to put some effort into the outing. Being a fun run, the start was leisurely, and I had the fun of leading the pack down the hill and past the small crowd at the school before a few others joined me for the blustery northbound leg. I settled back a few places, running with a couple of high school kids who shared more stories of Larry while we all voiced our excuses for the day. One of them said he’d swam for two hours that morning, one said he’d already run a track meet that day, my excuse was just that I was old. But they were quick to correct me – not compared to Larry. Old meant nothing to Larry. It’s a great lesson to take away. 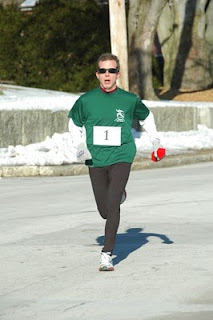 Another group passed us as we attacked the hill past mile two. I couldn’t hold them, but I left the youngsters behind. Perhaps as Larry might have done. Indeed, as Larry had done to me back in July of 2008. The run wasn’t scored or timed, but I was near enough to the front of the pack to count out 7th place. My time was unremarkable but satisfying, as I equaled my mark from the Thanksgiving 5K without really working too hard and on a hilly course.

And Larry had one more “Who Knew?” moment to deliver. Legends do that, they rub off on people who don’t expect them. In this case, our club squad of four included a young lady who literally joined our club in the van on the way down. She’d just moved here from college in New York State, and had grown up in Europe. I may not have known much about Larry, but she had utterly no idea who he was. She was probably the only person in the race so entirely unaware of Larry’s legacy.

And she won it. Go figure. Score one for our club!

No, it wasn’t a race, and no, there was no scoring, but they did award some Larry mementos to the first male and female finishers. And that’s how a most unique “trophy” – a picture of Larry racing – landed in the collection of a new-to-the-area young runner. A trophy that will probably hold more motivational power than any golden plastic man screwed on to a piece of cut rock ever could.

It would have been nice to know Larry better, but it’s still sweet to have sidled into his life however briefly, join in Saturday’s celebration, and carry his inspiration onward.

[ Thanks to Ted Tyler from Coolrunning and JimRhoades.com for the race photos! ]
Posted by Gary Cattarin at 11:03 PM