This is not good. It’s Wednesday, a mere four days to the Mount Desert Island Marathon, and I’m sitting here at my home office desk with a heating pad on my right calf. I know it’s the week to taper down my training, but this is not what I had in mind.

Training for any race is always a delicate art of peaking readiness and performance while staying healthy. Short of last summer’s foot problems and the subsequent dramatic episode last fall, I’ve been pretty lucky on that count. Yeah, I felt like crap in April, but September roared in with the readiness signals, and as MDI approached, all systems looked “Go!”

Last Thursday morning’s run was a hugely satisfying confidence builder, a nine-miler at sub-6:50 pace that even marked a course best time. In short, I was psyched, I felt great, and I hammered it. In the last miles the now infamous right calf complained a little, so I tread carefully, but it was nothing I was really worried about.

I planned one last mid-distance run the following day, and I wanted it to be a strong effort, so I called up Rocket John (of previous posting fame), and we set out early Friday at slightly slower than John’s usual patented Banshee pace, since, after all, this was the last serious run, the start of my real taper, at T-minus 9 days and counting. And while I was aware of the calf and was treating it carefully, all systems were, in NASA terms, nominal.

Three miles in it turned ugly. Maybe it’s because nobody outside of NASA has ever used the word “nominal”.

Understand that being the slightly obsessed type, I rarely stop during a training run, save for events like railroad crossings actually containing a train, intersections actually containing a tractor trailer, or something that really hurts. I stopped. And there were no trains, trucks, or tracks. It hurt. Not like screaming, Oh My God, it’s alive and it’s got my leg in its jaws hurt, but enough. Stretching and massaging didn’t do much, so we cut short and jogged back at a more human pace. And then began the worst part, the waiting and wondering.

If I take a couple days off, will it heal? If I run again, will I re-injure it? If I take a week off before the marathon, will I be a stiff, klutzy, non-functioning runner? I know my conditioning won’t go away in a week, but I won’t feel too smooth after a week’s break, either.

I gave it a couple days and jogged a few dog slow miles on a dirt track Sunday evening while coaching my middle-school cross country team. Since my Coach identity was egging them to run for a half hour straight – something most of them had never done – we’ll call it setting an example. But it was circumstantially reasonable; I was going slow enough that even my non-runner wife jogged along for a couple of miles (she admitted she hurt, but only a little, a couple days later, but was quite satisfied – way to go girl!). And the leg didn’t feel bad. But not fixed, either.

And in daily life, it’s not bad. I know it’s there, but nobody would suspect I’m injured. However at present, I don’t really care about daily life, I care about a marathon in a few days. A marathon where I’m not really worried about my time, but I’d like something respectable, and most importantly I’d like to have an enjoyable day with all parts functioning at the end. After last fall, I know what the alternative is, and it’s no fun. At present there’s most certainly a very tender spot halfway up the calf. My mind vacillates between “nasty strain” and that ugly “tear” word. But who can tell?

So now it’s Wednesday night, and save for that three mile jog, I haven’t run a step since Friday morning. I can’t imagine toeing the line for a marathon not having run in the week prior. I’m just crossing my fingers that a couple more days will do the trick. Cross yours, please.

Interesting Tidbit: I’ve been meaning to sneak this one into a posting somewhere and keep not getting to it. So I’ll get to it. In the, “Shirley, you’re joking, stop calling me Shirley,” department, I had a rather interesting run a couple of weeks back. A few hundred yards out from home I started sounding like a one-shoed horse, clop, step, clop, step, clop, step… Naturally I suspected I’d picked up a rock in my shoe, it happens all the time. When the opportunity of rough spots in the pavement appeared, I scuffed a few times to dislodge it. No dice. Hmm, perhaps it’s not a rock, it won’t come out… I started thinking back to a few years ago when I picked up a surveyor’s nail – point up, into the midsole, but fortunately angled so that it stuck out the side rather than into my foot. I tried to feel for any discomfort in my shoe, but all was well. With no discomfort, I saw no need to stop, but that pesky clop, step, clop, step, clop, step just wouldn’t go away. I finished the eight miler and finally lifted the hood for a look around. I expected to find a well seated pebble in the tread. 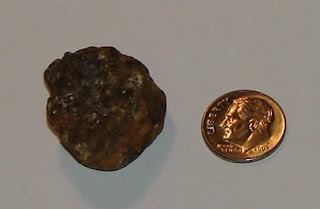 My shoes of choice are Asics 2100 series (and I usually buy last year’s model on cheap closeout online, why not? They were good enough last year, right?), but I often will try something different just for variety. That day I happened to be wearing a pair of Mizuno Waves, which happen to have an unusually large yawning pit directly under the heel. Nestled so tightly, with such a perfect fit that I didn’t even see it at first, wasn’t a pebble, but a rather large granite boulder, a full inch by five-eighths – after being worn nicely smooth on one side.

Consider that. Eight miles with a very large rock directly under my heel, and I couldn’t feel a thing. If it weren’t for the Victorian carriage ride sound, I wouldn’t have suspected a thing. Shoe technology is really pretty amazing when it comes right down to it.
Posted by Gary Cattarin at 11:10 PM