Another week in Beautiful Belleville, Ontario draws to a close. The town pretty much redeemed itself after last year’s string of running chaos. But, funny how you grow attached to a place you frequent, and how you actually care when they screw it up, which, sadly, it appears is happening.

As I recounted last week, my attempts to run during last year’s visit resulted in repeated disasters of one sort of another. After that experience, this year simply had to be an improvement. With great expectations I set out Monday morning, a perfect morning, cool, crisp, a pleasant breeze, sunny, green, spring, unlike last year’s visit during mud season. Out of the hotel, around the corner where within one block I can escape Strip Mall Hell and enter West Riverbank Park, which, as it’s name suggests, offers a lovely gravel trail along the Moira River, peaceful, quiet, lovely.

A side tale: My sister’s first child was the Perfect Baby. Her second was the Child From Hell, who projectile vomited for a solid year. My first child was also the Perfect Baby. We wondered why people said babies generated laundry, since ours could wear the same sleeper for three days and look fresh as, well, a baby. Then along came child number two, who on day three let forth one of those projectile emissions, and I had visions of Hell… Here we go again. It must be genetic.

At this moment in Belleville, looking at the construction barriers at the entrance to West Riverbank Park, I had flashbacks to last year and visions of Hell. Here we go again. It must be Belleville.

Damn the torpedoes, full speed ahead. The road was closed to cars and stripped of its pavement, but sported an appealing packed dirt surface. Heck, I can run around any holes they put in the road! Onward! I plunged into the park, enjoying the soft surface.

Insidiously, fencing snuck up along both sides the road without my notice. Then came the gated entrance to the hard hat zone with the excavators and their craters. No way out. Can’t go forward. Can’t even get off the road! The suddenly noticed roadside fence stretched back a long ways.

You’ve got to be kidding me. Again?

The fence was flexible, I bent it down and crawled over, nearly tearing my shorts, zigged and zagged past the earth-moving disaster, and all became well with the world again. Finally, cruising along the river, gurgling, rushing, redwing blackbirds screeching, the smell of spring. All was well with the world. Hell avoided, false alarm. Just like my second child, who never projectiled again. Following the trail downtown along the river, chasing a flock of ducks floating downstream on the rapid current, a heron poised just feet away from me, all good.

And it got better. After work, I drove out to the end of that road I’d tried to run last year, only to find it blocked. Now, without snow, I could see it appeared to go through, too rough to drive but certainly runable. The neighbors at the end of the street came out to answer my query about where it went and were so friendly I had a hard time leaving. Canadians are just like that. With their advice in my pocket, on Tuesday morning Philburn Road and the jeep trail served up a lovely lilac-scented two mile sojourn from my 9-mile loop otherwise cursed by the area’s typically awful (for running) rural highways. A stretch like that, and the memory of the kind people who helped me find it, are all it takes to call it a great run.

And finally this morning I tackled the one route I’ve never covered but always wanted to: the Norris Whitney Bridge. It’s a high arcing, soaring bridge over the Bay of Quinte, how high I cannot say (nor can I find out even with the help of Google). It’s not quiet, it’s not peaceful, the traffic is rushing past – happily, on the other side of a solid concrete barrier – and it was buffeted by a strong crosswind and drizzle, but it was just plain cool to run. Charge the hill, watch the whitecaps 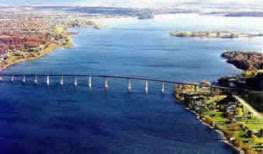 on the bay, soak up the view even though the weather was crappy, plunge down the other side, turn around and do it again. Along the way, it occurred to me that this was probably the largest body of water I’ve crossed on a run.

And so would end a good week of running in Belleville, except for one thing: that construction in the park. As the week progressed I inquired about it, and was troubled at what I found. It’s not rehab or improvement work for the park, it’s murder for the park. The City of Belleville, with 5 bridges over the Moira River in a span of 2.3 miles (6 if you count creatively, plus 2 more pedestrian bridges), is bisecting this lovely open space with a new major thoroughfare and another bridge across the river. To alleviate traffic. Said new bridge will be a mere eight tenths mile from the next bridge to the south, and less than half a mile from the next to the north. For this, they are slicing what I believe is the largest park in town cleanly in two, and replacing the quiet access road from the west entrance with a broad strip of crowded, pollution-spewing pavement. I don’t live here, I’m not an expert on their problems, but it seems to me simple insanity.

Consider, Belleville (named after a person, not after the beautiful aspect of the word belle) is a city of merely 46,000 people according to its welcome sign (and this is Canada, those are metric people, that’s the equivalent of only 39,450 in the States…). In my half-dozen week-long visits, I’ve never sat through more than one traffic light cycle. The desk clerk at the hotel described 5 PM as “rush minute, wait a moment and it’s over”. Others I spoke to simply rolled their eyes. There is no traffic problem in Belleville.

Scouring the web for news of this project was unproductive, but the tidbits I found backed up the traffic justification. I found no mention of resistance to the permanent desecration of their park. It seems that through the city fathers’ lenses, this was perfectly reasonable. Through my lens, it’s a tragic loss of the kind of open space that makes a city livable; space that cannot be recovered once it’s lost.

It’s easy to fall into the trap of believing what you believe so strongly that you don’t see the bigger picture. Let this be a lesson to us all to scrutinize our plans with fresh eyes and different perspectives. Apply that to life, apply that to your running plans as well, it’s always valid to avoid a tragedy.
Posted by Gary Cattarin at 10:26 PM